Accessibility links
Solving Crimes With Pollen, One Grain Of Evidence At A Time Dallas Mildenhall is one of the world's few forensic pollen experts. He recently identified a rare, mutated pollen grain that helped police crack a murder case in his native New Zealand. 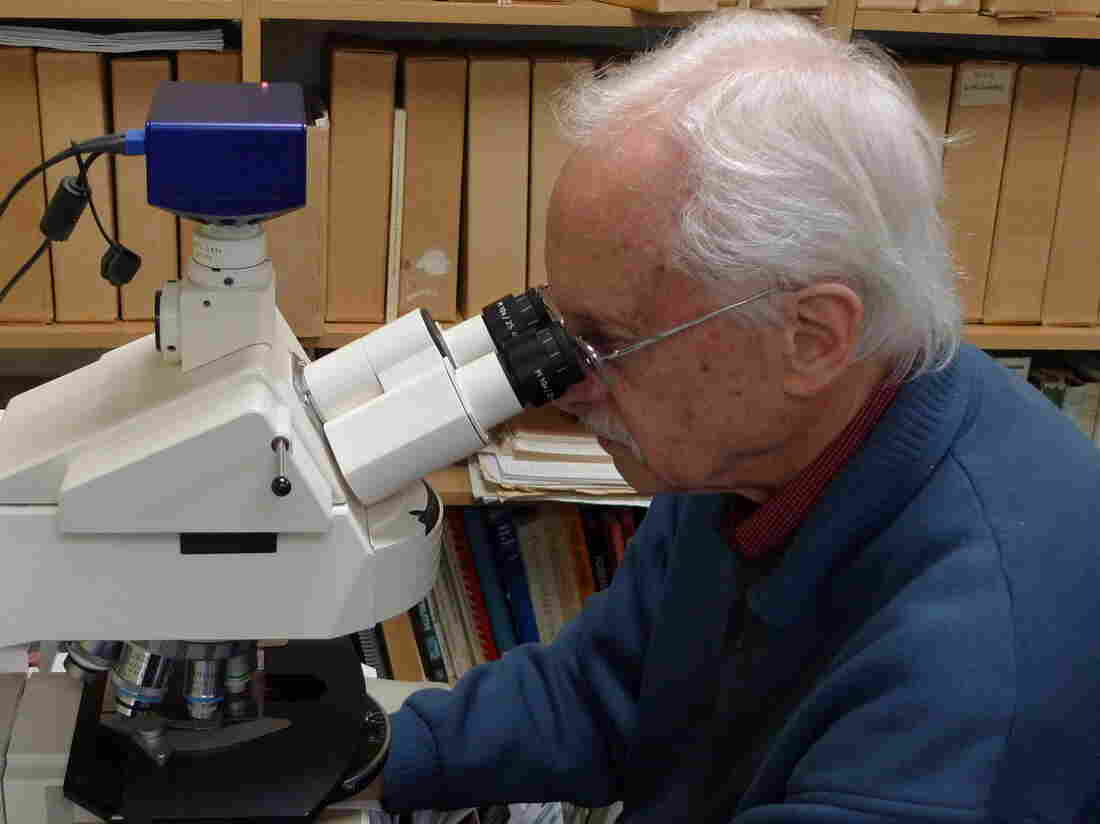 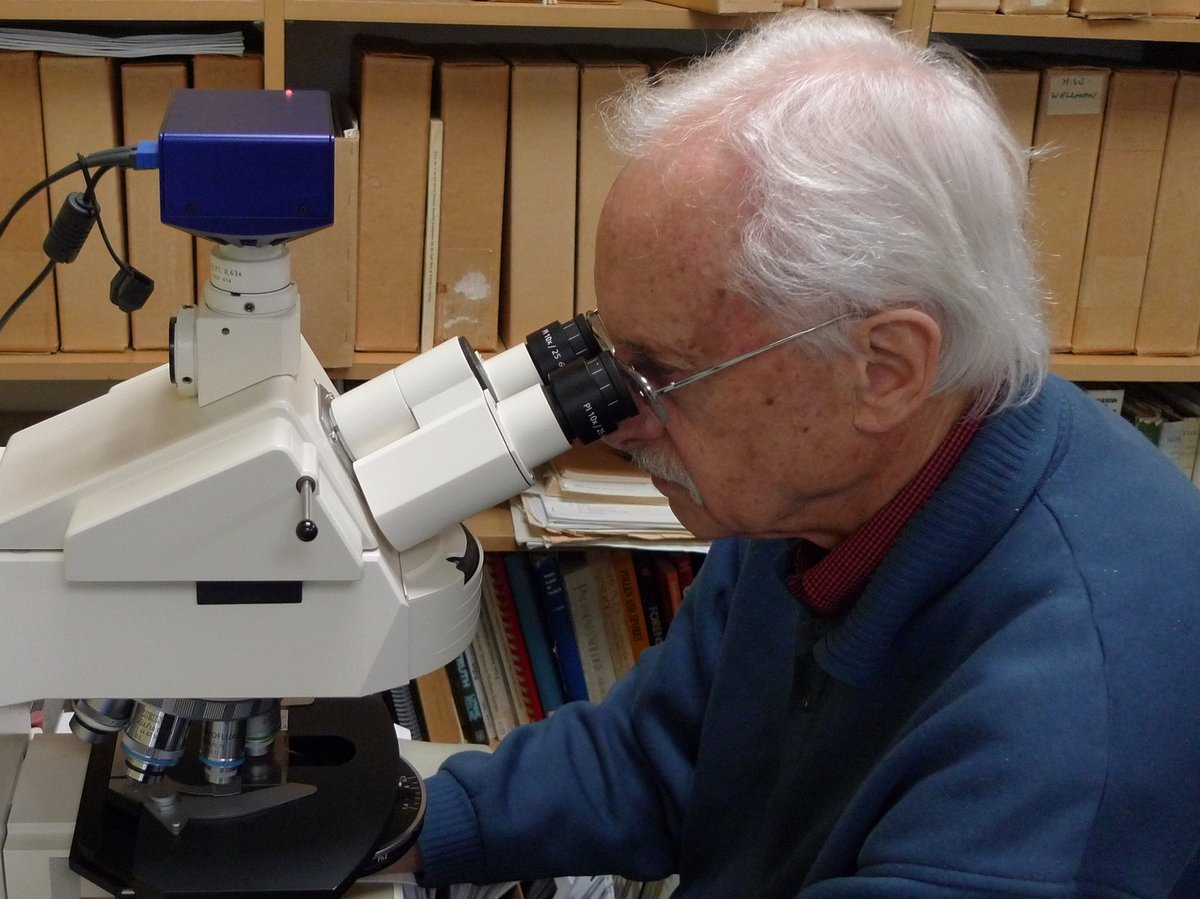 Some murder cases are harder to solve than others. The investigation into the killing of Mellory Manning — a 27-year-old woman who was assaulted and murdered in 2008 while working as a prostitute in Christchurch, New Zealand — confounded police.

They conducted an investigation and interviewed hundreds of people, but months later, they still had no solid leads.

To crack the case, the police required the expertise of an unusual specialist. Dallas Mildenhall, a white-haired scientist in his 70s, is a forensic palynologist – a pollen and spores expert who helps solve crimes. One of only a handful of such experts in the world, he has helped solve cases of murder, arson and art forgery all over the globe. He once traced counterfeit malaria drugs to the border of China and Vietnam by identifying pollen in the capsules.

Police turned to Mildenhall, who lives in Christchurch, when their investigation into the Manning case got stuck.

"One of the major reasons why [the investigation] was stuck is that the police could not say for sure where she had been killed," David Wolman, who wrote about the case for Matter magazine, tells NPR's Arun Rath. "They were very suspicious early on of a gang called the Mongrel Mob because they were involved in prostitution — they had this sort of warehouse hangout not far from where the body was found. And yet they didn't have the evidence making that connection. All they had was supposition.

"So the challenge for someone like Mildenhall, then, is to come in and look at pollen samples taken from Mellory's nasal passages and her clothing and try and link it to locations that the police are wondering about as far as potential scenes for the crime."

A single pollen grain from a sample tells you nothing. But together, all the pollen grains in a sample — their composition and concentration — can reveal a lot. Still, we're talking about pollen grains, their details invisible to the naked eye.

Mildenhall examined pollen from potential crime scenes around Christchurch, but came up with nothing. Then, after months of peering through the microscope at tiny slides, he saw something almost unbelievable.

He was examining a kind of pollen grain that normally contain only a single pore. But Mildenhall "noticed a pollen grain that looked like it had two pores," says Wolman. "It really doesn't sound that exciting ... and at first, he thought it was just a trick of the microscope or a sample maybe had been smushed or deformed — because to get a sense of how rare it was, how dramatic this finding was, he said it would be like seeing a dog with five legs."

Mildenhall examined the pollen taken from Manning's corpse and noted multiple examples of these highly unusual, two-pored pollen grains. He shared his theory with the police: An herbicide had caused a mutation in the pollen, giving it more than one pore.

"Sure enough," says Wolman, "the area right next to the Mongrel Mob hangout and warehouse had been sprayed precisely at the time of year that Mildenhall suspected."

The police told Mildenhall to reexamine pollen samples collected from the gang's warehouse. "And so he spent three days poring over these samples again," Wolman says. "And then, lo and behold, he started to find significant concentrations of this two-pored pollen grain."

That clinched it. The pollen embedded in Mellory Manning's clothing during her murder was solidly linked to the Mongrel Mob's hangout. Police interrogated a suspect and presented him with this forensic evidence, "saying, 'Look, we can connect you to this place at that time of year,' and that rattled him enough that then he started to sing," Wolman says.

If pollen can play a crucial part in solving a case like this, why isn't it used more often? Wolman says that like much forensic evidence, it can be hard for judges and juries to understand. But studying it is also difficult, time-consuming work — and scientists who have this expertise are about as rare in the world as two-pored pollen. And there may be no one who sees the world like Dallas Mildenhall.

"Dallas Mildenhall is a guy who, he doesn't look through the air at the landscapes in front of him," Wolman says. "He sees this blizzard of activity in the world around us, constantly, of pollen grains swirling and storming and rising and falling and raining down on the ground. The trick is being able to read that rain."