Accessibility links
Review: Torres, 'Sprinter' On her second album, Sprinter, Torres confronts the problem of confession head-on and proceeds to annihilate its boundaries. 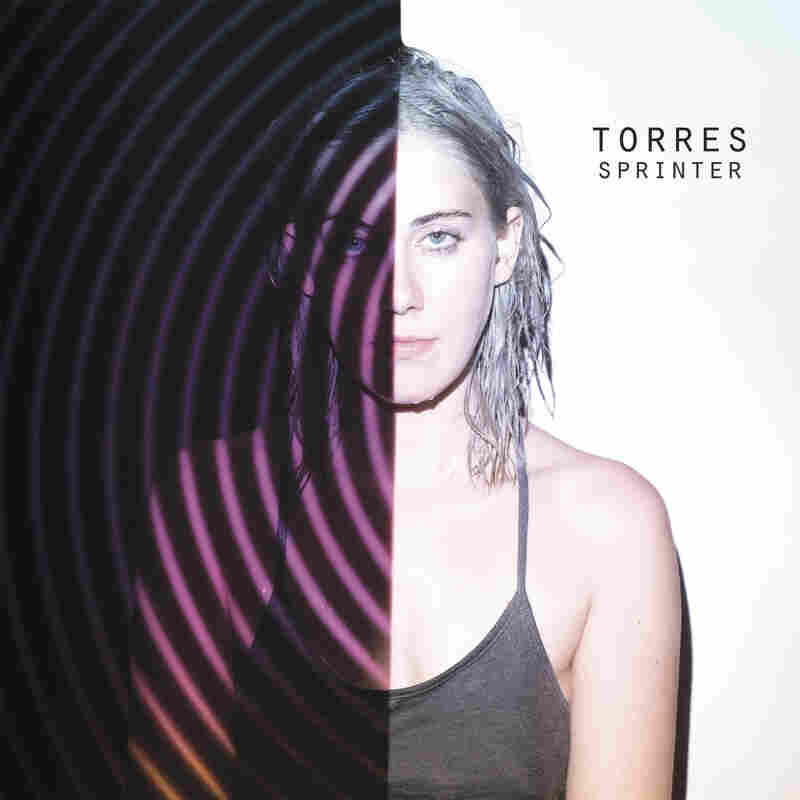 "Confessional" is a term often tossed around in discussions of singer-songwriters, but it's also one of the most misunderstood. In a recent interview, Mackenzie Scott, who makes music under the name Torres, called it "a four-letter word," common and pejorative, and overapplied to women in particular. But what does "confessional" even mean as an element of writing, considering that virtually every writer both taps into and goes beyond her own experience and insight in creating scenarios that others can comprehend?

If Joni Mitchell was confessional when she wrote, "I met a woman, she had a mouth like yours," in a song about an ex-lover, isn't Bob Dylan, too, when he wails, "My warehouse eyes, my Arabian drums, should I leave them by your gate," about his ex-wife? Yet one is broadly considered a prophet, speaking for experience well beyond his own. The other, the woman, is categorized as more intimate; her equally poetic language has been dubbed something to identify with first, and only after doing so to call art.

On her second album, Sprinter, Scott as Torres confronts the problem of confession head-on and proceeds to annihilate its boundaries. She does it by going back to the word's religious origins. Scott was raised Baptist and attended a nondenominational Christian university, and the songs on Sprinter shimmer with recollections of experiencing faith, even as they pulse with the energy of questioning it. Not every song here describes a sectarian encounter — some, like the daringly spare and slow "Ferris Wheel," are about romantic heartache, and Scott's autobiographical exploration of family themes informs some of Sprinter's most profound passages. (The eight-minute album closer "The Exchange" is the rawest and most telling account of an adopted child's struggle with loss that this adoptive mother has heard.)

The title track, a rocker with a tense stop-start structure, describes a child enraptured and betrayed by an untrustworthy man of God who teaches herself how to run beyond the church's finish line. In the hymnlike "New Skin," all the nervousness of youthful transformation — this could be a baptism, psychoanalysis, or a more individual kind of self-exposure or coming out — builds toward a climax that's both triumphant and grave. "Son, You Are No Island" blends theology and sexual dread in a beautiful, gothic homage to one of the masters of such combinations, John Donne.

Scott's skill and ambition as a lyricist thrills, especially given her young age, 24. But Sprinter goes far beyond her 2013 debut because of what she and her producer, Rob Ellis, have accomplished musically. Ellis is best known as the drummer and producer for PJ Harvey, and though Scott is more influenced by Brandi Carlisle and the National than by Polly Jean, there's no denying that the frameworks she and Ellis construct on Sprinter echo the majesty of classic albums like Rid of Me and To Bring You My Love. Scott is more contemplative than Harvey, not so frequently craving catharsis. Her songs risk calm in fascinating ways. Aided by Ellis, and by the guitarist Adrian Utley, who brings some of the atmospherics he developed within Portishead into play here, Scott creates as space that turns songwriterly confession sacramental. The drama of the Baptist public testimony mingles with the dark privacy of the Catholic shriving pew in music that dares to take on those riskiest attributes, seriousness and mystery.

As part of a cohort of young women singer-songwriters as bold about emotions as they are eager to experiment — Sharon Van Etten, Erika M. Anderson of EMA, Katie Crutchfield of Waxahatchee, and Brittany Howard of Alabama Shakes, to name a few — Scott grasps the usefulness of songwriterly confession while continually pushing against its conventional confines. "I'm no martyr," she sings deliberately as she dives into the perilous revelations of "The Exchange." She is not. Like her best peers and forebears, she is an evangelist of the personal, her music pulling out its grace. Her confessions further our enlightenment.