Accessibility links
Review: Chris Stapleton, 'Traveller' Stapleton presents himself as a true Southern character, a family man who clings to his vices and a searcher whose dreams of home don't prevent him from wanting to roam. 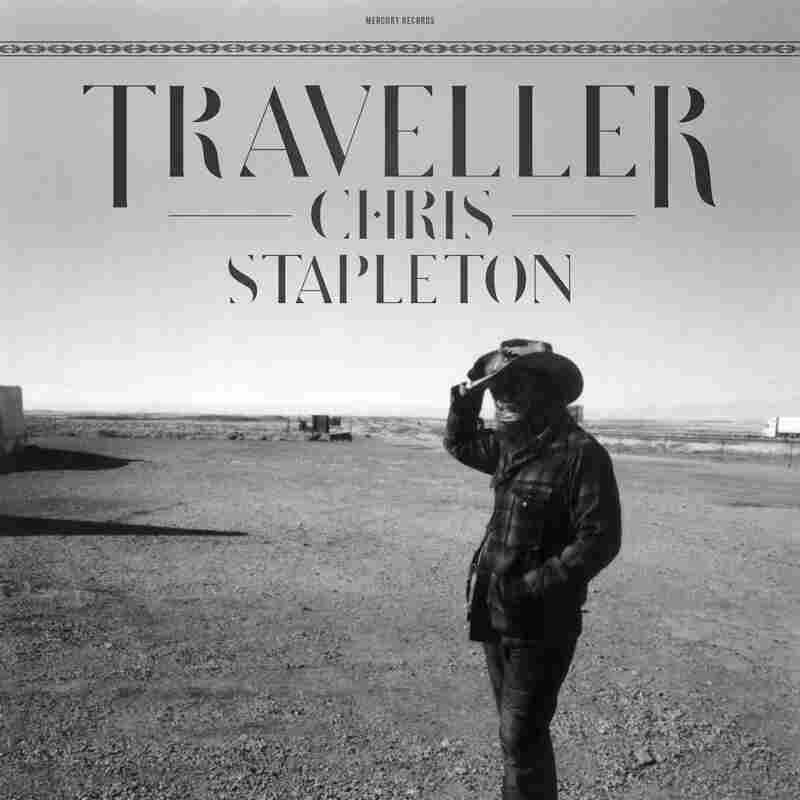 Even the most seemingly organic contemporary country albums — the ones by often-awarded "authentic" artists like Miranda Lambert and Eric Church — can sometimes show evidence of a checklist. Eager to prove both currency and adherence to tradition, these more daring country stars range over predetermined territory, showing familiarity with Southern musical landmarks like the blue hills, the swamp, the honky-tonk and the arena-rock amphitheater. There's almost always a funny song on these album, and a family-focused tearjerker; there are numerous references to hard liquor and soft-focused rural landscapes. There's some fast picking and power-chord riffing, and a soulful moment that hits purposeful transcendence. The best artists perform this predictable eclecticism with skill and passion; they do care about, and have fun with, country's touchstones. That said, a listener can anticipate each required turn, like the compulsory elements in an Olympic skating routine.

On his debut solo album, Traveller, Chris Stapleton has the double axels and triple jumps down, but he delivers each with a remarkable lack of showiness, so that each one feels like much more than an exercise. Partly — mostly, maybe — this is because of his voice, which became one of Nashville's most beloved in the years he spent leading the bluegrass-based SteelDrivers and singing on albums by everyone from Dierks Bentley to Angaleena Presley to Vince Gill. Stapleton, who was raised in Kentucky, sings with the power of a classic Southern rocker, but modulates his rawness with a great sense of soul phrasing and a seasoned balladeer's ability to scale down.

This decade's endless parade of blue-eyed pretenders could learn a lot from the care Stapleton takes incorporating soul elements into a declamatory rocker like "Nobody To Blame" or a smoky love song like "Tennessee Whiskey." Stapleton turns the latter, previously recorded in laconic versions by both David Allan Coe and George Jones, into an Otis Redding-style burner. His melismatic flights on the verses never feel showy; they flow logically from the previous moments when he's held back.

"Tennessee Whiskey" is one of two relatively recent country favorites included on Traveller, allowing Stapleton to prove his bona fides with the genre's songbook. (The other is the charming "Was It 26," previously recorded by the Charlie Daniels Band, which now reads as gentle advice from the 37-year-old Stapleton to hard-partying young fans of the likes of Luke Bryan.) The other songs are all Stapleton co-writes — he's as valued as a Music Row songwriter as he is for his umami-providing background vocals. Stapleton takes back the mournful "Whiskey and You" from Tim McGraw in a version that really feels like a bitter hangover.

Elsewhere, Stapleton artfully employs his skills as a songwriting generalist: There's the Texas dance hall sweetness of "More of You," a duet with the pitch-perfect harmonizer (and his wife) Morgane Stapleton; the hard rock crash of "Parachute"; the nod to Johnny Cash on "Daddy Doesn't Pray Anymore" and the hat-tip to Hank Jr. on "Might As Well Get Stoned." The images of frisky devils, fields full of stars and many empty bottles might not be shockingly original, but they appear within stories that always register as immediate and personal.

Producer Dave Cobb allows Stapleton to lay back or push forward within arrangements that don't have any gimmicks, only great playing and plenty of space for that big voice to fill. Throughout Traveller, Stapleton presents himself as a true Southern character, a family man who can't help but cling to his vices and a searcher whose sometimes old-fashioned dreams of home don't prevent him from wanting to roam the modern world. Has Stapleton lived all of these stories of hard luck and wild times? I hope not, for the sake of his liver and his kids' college funds. But in the imaginary space where country clichés become the gospel truth, he's utterly convincing.