Accessibility links
Too Scared To Talk To Police, Stalker's Victims Open Up In 'Grim Sleeper' From 1985 to 2002, a series of killings struck South Central Los Angeles. A new documentary, Tales of the Grim Sleeper, explores the 25 years it took for police to arrest a man they say is the killer. 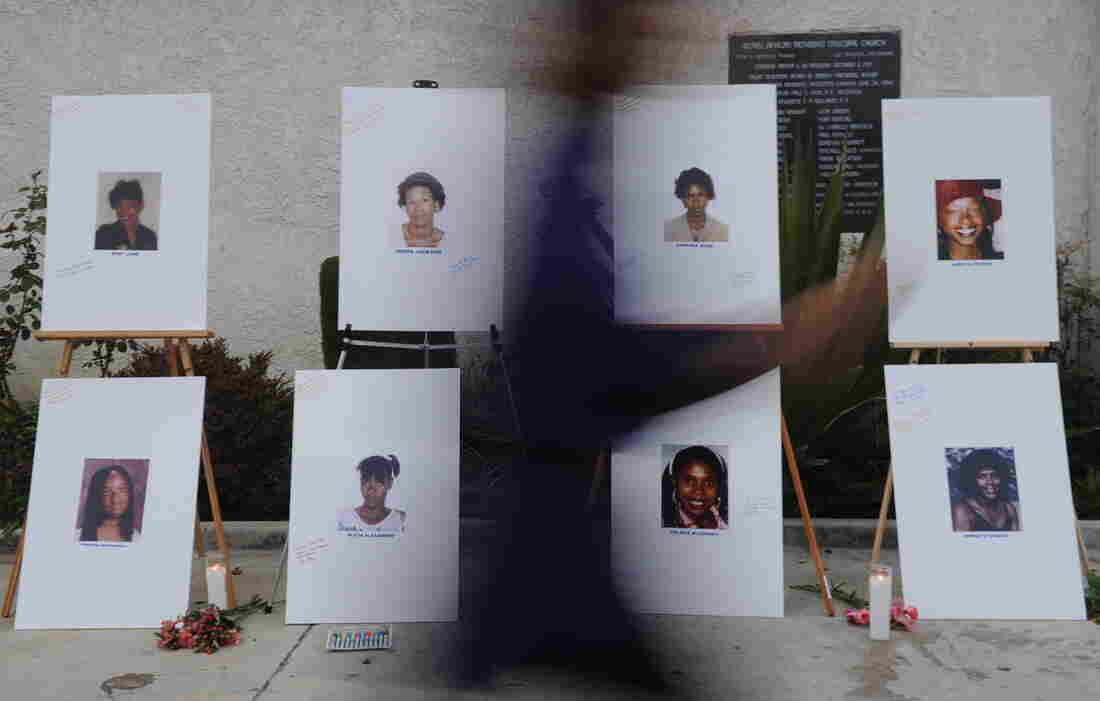 A woman walks past a memorial for some of the victims who are said to have died at the hands of the serial killer dubbed the "Grim Sleeper." Mark Ralston/AFP/Getty Images hide caption 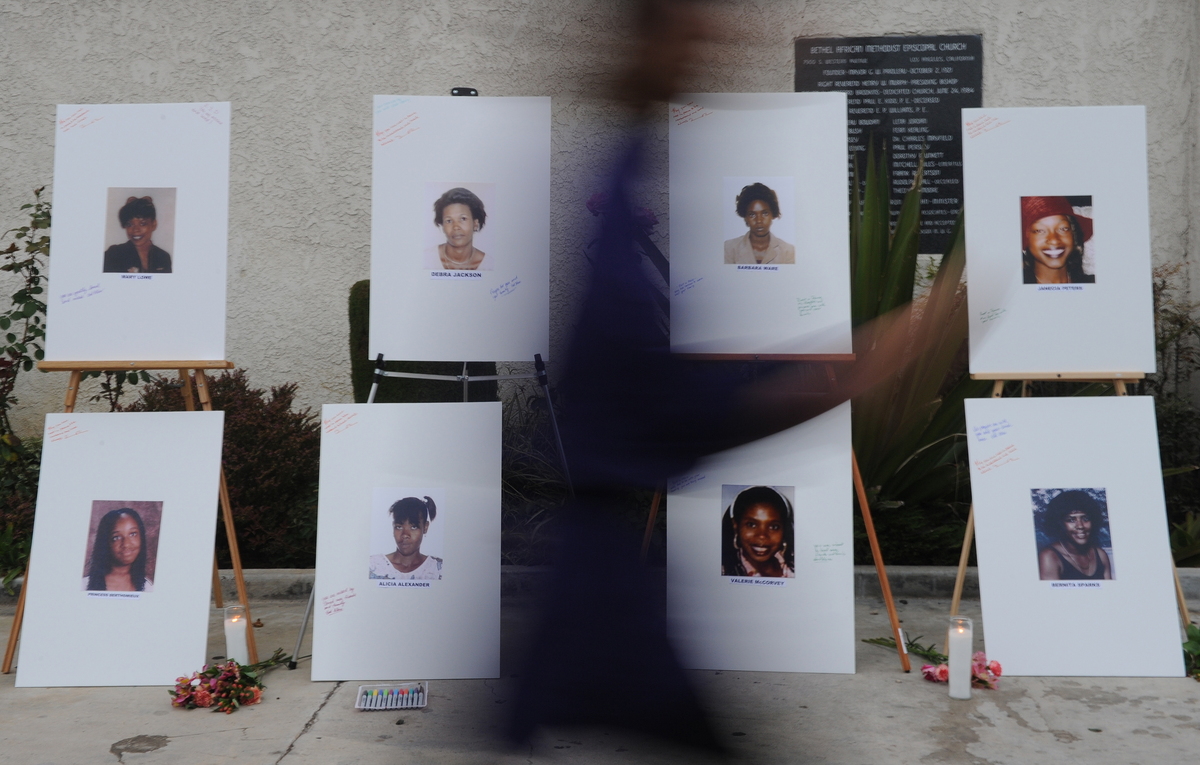 A woman walks past a memorial for some of the victims who are said to have died at the hands of the serial killer dubbed the "Grim Sleeper."

On Monday, HBO will air Tales of the Grim Sleeper, a documentary about a series of serial killings in South Central Los Angeles that took place from 1985 to 2002. A suspect was arrested in 2010. All these years later, the man accused of the crimes remains in jail and has yet to go on trial. But he — and the L.A. police department — are indicted in this film.

"The Grim Sleeper" is the sinister moniker the LA Weekly gave the serial killer because he took a 14-year slumber between killing sprees. The man suspected of being the killer is Lonnie David Franklin, a 62-year-old former garbage collector and police mechanic. He's charged with shooting or strangling to death 10 women. 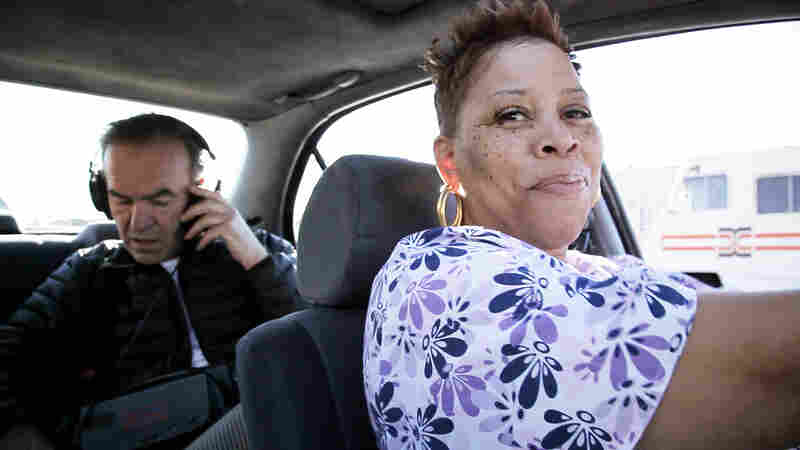 In the documentary, filmmaker Nick Broomfield says Franklin may have killed more women he picked up on the streets of South Los Angeles.

Many were prostitutes and drug addicts. Some of their bodies were found dumped in alleyways. Despite a 911 call and eyewitness descriptions of the suspect, the police did not link the murders for years. Neighborhood activists formed a coalition and took it upon themselves to warn the neighborhood and offer a reward for his capture.

Pam Brooks is among those who say they are frustrated and angry by the delayed justice.

"The police don't care because these are black women," she says in the film. "It's not like Lonnie killed no high-pro[file] white folk. We don't mean nothing to them. We're black."

Finally, in 2010 — 25 years after the first body was found — police arrested Franklin, using his son's DNA to link him to unsolved murders. Broomfield, a British filmmaker, says he read about the case in the LA Weekly and decided to make a documentary about it with his son Barney.

At first, they encountered reluctance — even hostility — as they drove around Franklin's neighborhood looking for answers.

Eventually, Franklin's friends opened up, as did his son Christopher. But the filmmakers weren't able to land an interview with Franklin himself. And their repeated requests for interviews with the LAPD were turned down.

"No comment, because the case is going to trial" was the similar response I got from the police. So I headed over to Chief Charlie Beck's monthly news conference and asked what he thought of the film's critique of his department.

"When the majority of those crimes occurred was a different time and place in Los Angeles, and the crime rate was four times what it is now," he said. "The Los Angeles police department was a third smaller than it is now. Those were very, very difficult days, and things did not get investigated to the degree that we're able to do them now. I wish we could go back in time and fix all that, but that's not possible to do. But I will say that I'm extremely proud of Robbery-Homicide Division. I think they did a world-class job in that investigation."

Chief Beck said the use of DNA to capture Franklin was "groundbreaking." And he said detectives interviewed thousands of people in the Grim Sleeper case.

For the documentary, 15 women told their tales of meeting Lonnie Franklin. They said they'd been too scared to talk to police.

"He asked me: 'Why would a pretty girl like me be out there smoking? Did I want to go with him?' " says another. "He took me to his house."

Yet another woman recalled that his house was "nasty" and that he always took her to the garage. "He never wanted to go in the bedroom," she says. "And he had pictures of a lot of girls — crossed out."

It was Pam Brooks who persuaded those women to talk on camera. She'd had her own encounter with Franklin years ago, when she was hustling on the streets.

"I know these girls because I was out there ho-ing," she tells Broomfield in the film. They take turns driving through the streets where she once was a prostitute.

Broomfield says it was she who tracked down some of the more than 150 women whose nude photos were found in Franklin's garage.

"It was very different riding around with Pam, who knew half the women on the street, to, you know, two white guys who looked rather like they were propositioning them," Broomfield tells NPR. "Pam has a sort of almost Richard Pryor way of talking — she could just get away with things I don't think anybody else could get away with."

Now, from her home in Compton, Brooks tells NPR she's been sober from her addiction to crack cocaine for four years. At 48, she's a grandmother who works as a caregiver. And she says she was thrilled to have helped make this documentary.

"I was shocked," she says. "I was amazed, because these were two [English] boys who cared enough about these black people's lives. It was like, 'Wow.' And, I mean, they were cool."

Brooks says the Broomfields have taken her with them to film festivals, and now she'd love to make another movie.

As for Franklin, his trial is set to begin in June — 30 years after the first murder for which he is accused.