Accessibility links
What Luck! 'Early Warning' Continues Smiley's Farm Family Saga Readers eager to catch up with the Iowa farming family Jane Smiley introduced in Some Luck will enjoy the latest installment, which follows the five children off the farm and into the postwar era. 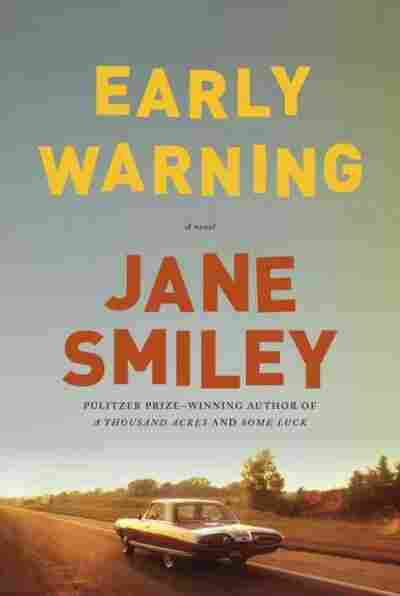 It's a good thing we only had to wait six months for Early Warning, the second volume of Jane Smiley's ambitious Last Hundred Years trilogy. Why? Because we were eager to follow up on the members of the Iowa farm family she introduced in Some Luck — while we still remembered all of them.

Early Warning picks up where Some Luck left off, in 1953, with the funeral of the 58-year-old patriarch, Walter Langdon. This book is less about farming than its predecessor because all but one of Walter and his wife Rosanna's five adult children join the great migration to America's burgeoning cities.

With the postwar baby boom, Smiley's cast proliferates exponentially and her focus broadens. Even with the helpful Langdon family tree (which doesn't include birth and death dates, presumably to preserve narrative suspense), it's a challenge to keep everyone straight. Walter's funeral brings many of them together, making for not just the "riot of floral exuberance" Smiley hails in the book's first line, but a riot of human exuberance, too.

Smiley throws a lot at us in the opening chapters as she jumps to a college campus in Iowa City, a tarmac in Iran, a children's birthday party in Maryland, and the newly expanded family farm in Denby, Iowa. All this would be difficult to make sense of without having read Some Luck. But as Smiley continues her year-by-year march — remarkably, never a slog — through the 20th century, we're pulled into her characters' absorbing dramas.

In its sweeping scope, Smiley's saga recalls Balzac's Human Comedy, John Dos Passos' U.S.A. trilogy and John Updike's Rabbit quartet. Firmly rooted in history, this middle volume begins two weeks after Joseph Stalin's death in 1953 and extends through 1986. It encompasses the Cold War, Vietnam, the Kennedy assassinations, the Kent State massacre, Watergate, the Jonestown mass suicide and the Iran hostage crisis. With a Langdon son-in-law working for the CIA, a grandson deployed in Vietnam and a granddaughter nearly following the Rev. Jones to Guyana, some of these historical events are intrinsic to the plot. But so many benchmarks are mentioned in passing that Early Warning occasionally feels like a flipbook of history-on-the-fly.

The novel's cumulative power lies in the unfolding lives of characters who share a home base and DNA — if little else. The contrast between two siblings' households is particularly intriguing. Frank, the Langdons' headstrong oldest son, has matured into a Don Draperesque figure who makes a fortune at whatever he puts his hand to — oil, weapons, real estate. "Not known for kindness," he fails to find satisfaction at home or work — or in his extramarital affairs. Reflecting on his disappointing offspring, Frank articulates one of Smiley's key themes: "You didn't have to be a farmer or the son of a farmer to know that breeding was always a gamble."

Smiley is keenly interested in the long-term effects of parental love — or its absence. Frank's chronically detached wife, Andy, "the least motherly woman in the history of the world," floats the idea that children whose parents don't adore them — including difficult Frank and his youngest sister Claire — are, unlike Andy, actually lucky because they're free to do what they want.

But the contentment of Frank's sister Lillian, a model child whom Rosanna found easier to love, belies this notion. She realizes "that she had lived an unusual life for only one reason, and that reason was that she'd known true love from the day she was born" — not just from her mother, but from Arthur Manning, the young widower with whom she eloped at 19. Their marriage and chaotic laissez faire household are warm despite his tendency toward depression, an inherited legacy exacerbated by his CIA work. ("You know what I do every day, Lillian? I exaggerate the Soviet threat," Arthur complains bitterly in 1957.)

The Last Hundred Years trilogy is about change — both societal and personal. One of the many pleasures of Smiley's long-haul narrative is that her characters evolve, sometimes surprising even themselves. (There are other surprises, too, including a mystery character not featured on the family tree.) Smiley's signature achievement in this by turns wry and wise old-fashioned yarn is her skill at deftly shifting focus between the long and short views. Early Warning doesn't leave us hanging, but it does leave us looking forward to the finale of this epic endeavor.