Accessibility links
A Senator's Effort Helps Bring Home The Last Marines Killed In Vietnam In honor of the 40th anniversary of the end of the Vietnam War, WBUR's Bob Oakes tells the story of Charles McMahon, one of the last Marines to die in Vietnam. 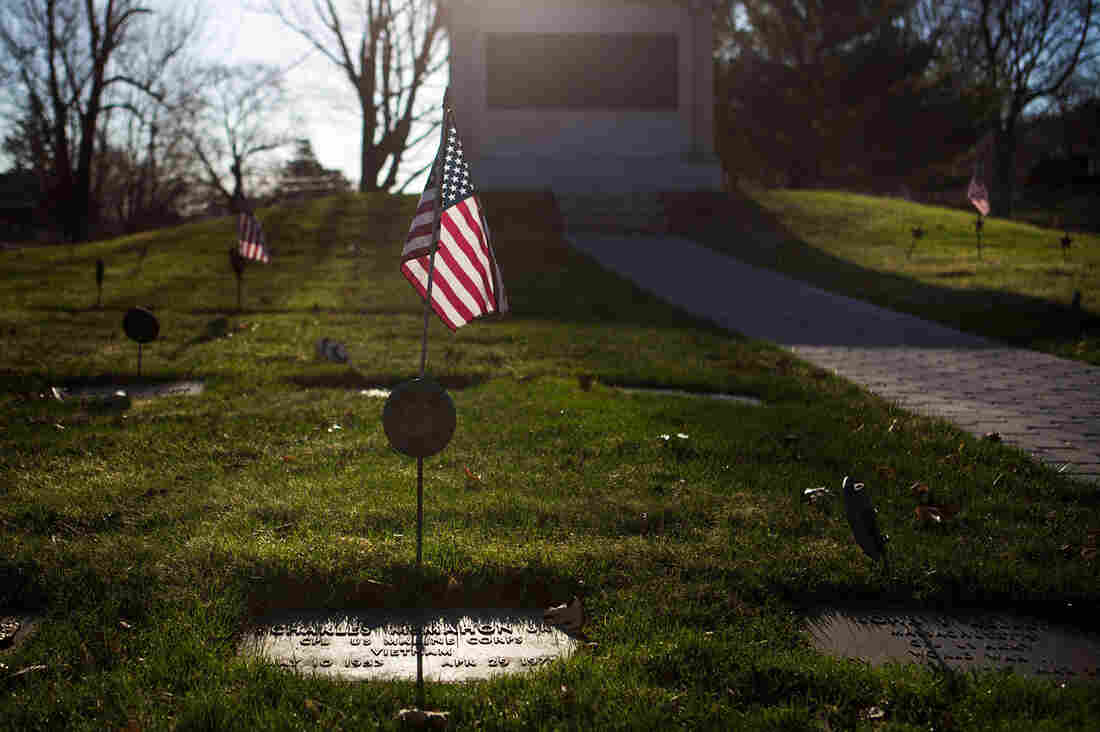 The grave of Charles McMahon in Woburn, Mass. He and Darwin Judge were the last two Marines who died on the ground in the Vietnam War. Jesse Costa/WBUR hide caption 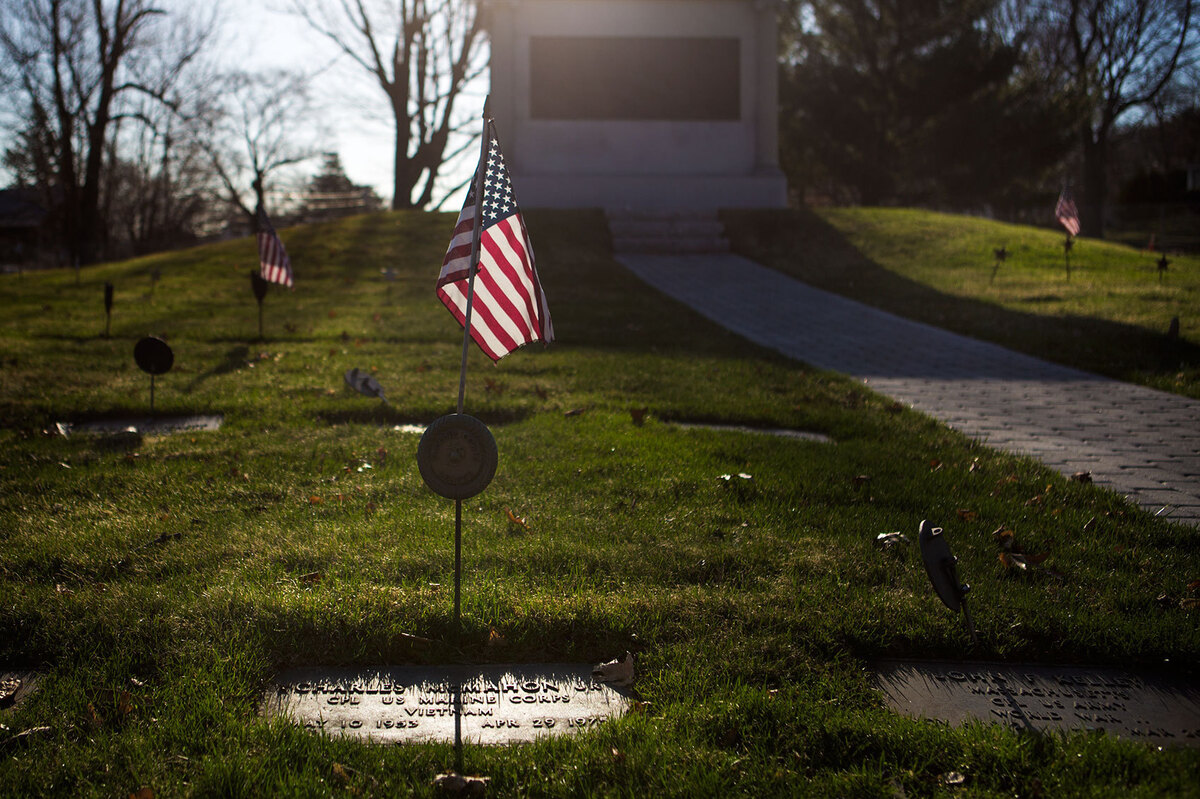 The grave of Charles McMahon in Woburn, Mass. He and Darwin Judge were the last two Marines who died on the ground in the Vietnam War.

NPR — along with seven public radio stations around the country — is chronicling the lives of America's troops where they live. We're calling the project "Back at Base." A version of this story has appeared on wbur.org as part of their series "40 Years Later: A Return To Vietnam."

It was 40 years ago on April 29, 1975, that the last two U.S. service members killed on Vietnamese soil died in Saigon. Both were Marines. 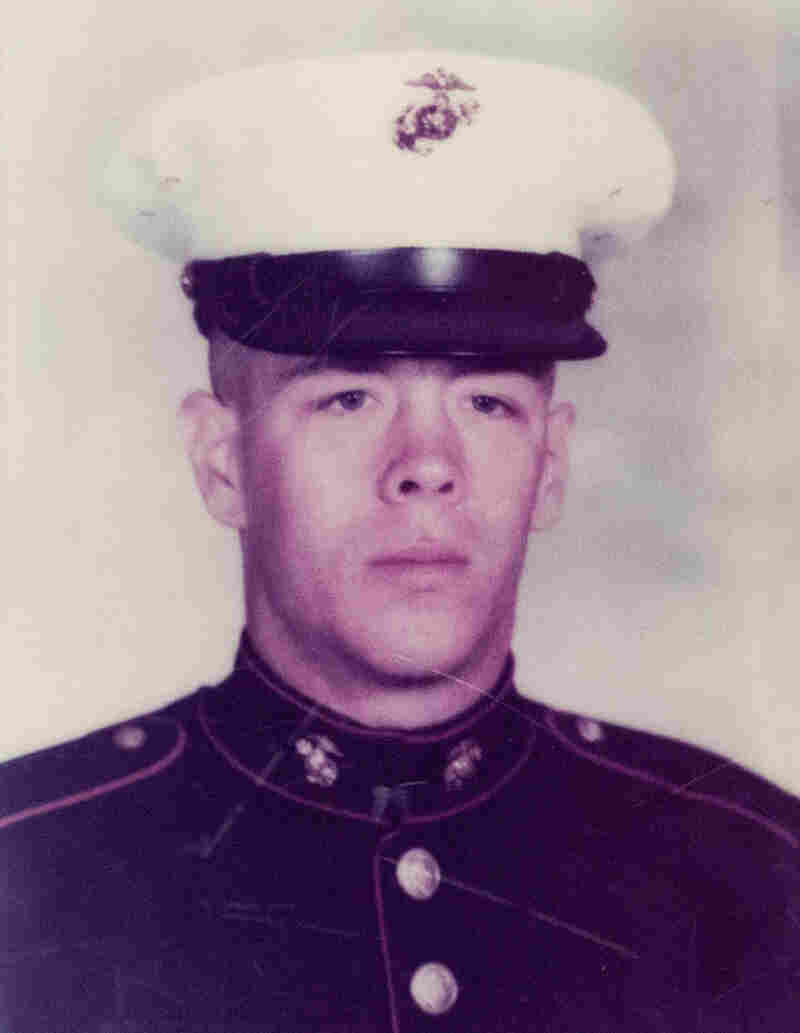 Charles McMahon was in Vietnam only 11 days when he was killed. Courtesy of the Boys and Girls Club of Woburn hide caption

toggle caption
Courtesy of the Boys and Girls Club of Woburn

One of them was 21-year-old Cpl. Charles McMahon from Woburn, Mass.

He and Darwin Judge were part of a security detail at Tan Son Nhut air base, a few miles outside of downtown Saigon. It was before dawn when a North Vietnamese rocket struck their position. It was a direct hit.

The war was supposed to have been over almost two years before. But the North Vietnamese — set to complete their takeover of the South — were firing rockets and artillery to disrupt the evacuation of the last U.S. personnel and their South Vietnamese supporters out of Vietnam.

McMahon had been in Vietnam for just 11 days when he was killed, days short of his 22nd birthday.

"Charlie was an absolute normal kid," says George Holland, who grew up with McMahon in Woburn. "He had a bike and a dog and a tree house and in '64 when the club opened, is when I actually met him. We were both 10 and the pool was the main attraction so we swam together and just became best friends at that time."

The pool at the Woburn Boys Club was the center of their lives. McMahon was so good in the pool that he became a coach and mentored younger kids. It's also where McMahon met the man who would mentor him: the Club's director, Ret. Marine Charles Gardner.

"We were just absolutely glued to his stories and just admired his contribution to the country and you know, the patriotism," Gardner says.

Both boys joined up. Holland recalls McMahon was a natural. 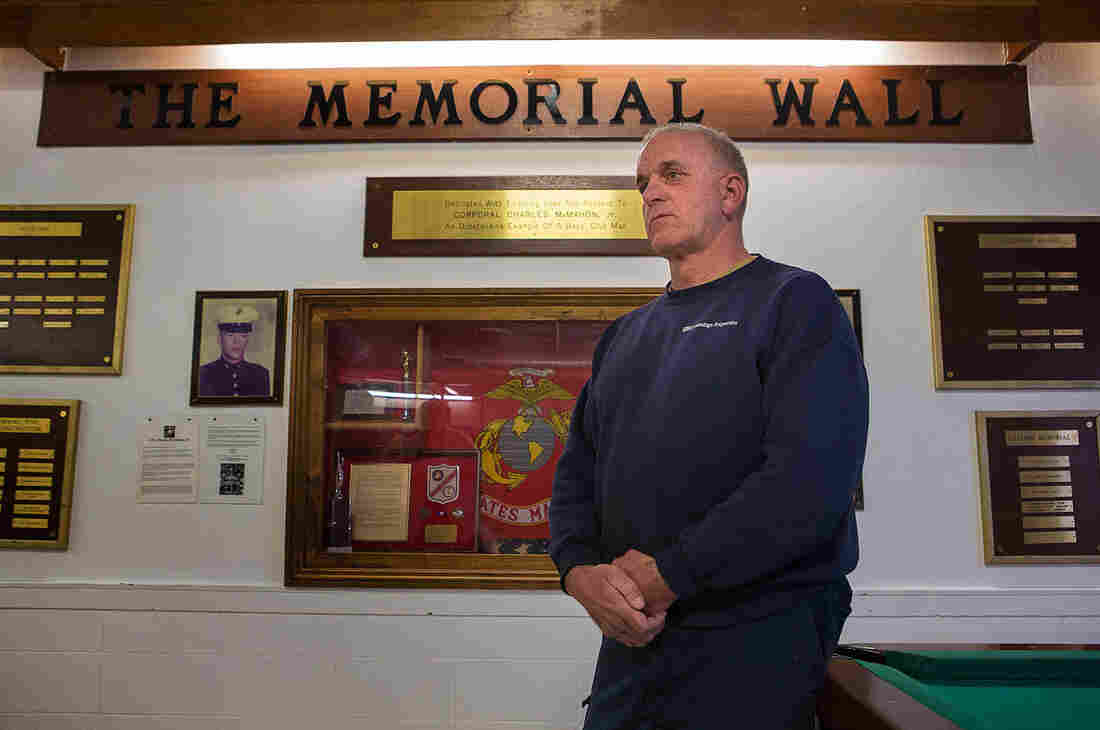 George Holland and Charles McMahon were best friends. The Woburn Boys and Girls Club, where the two spent much of their childhood, now has a memorial wall in McMahon's honor. Jesse Costa/WBUR hide caption 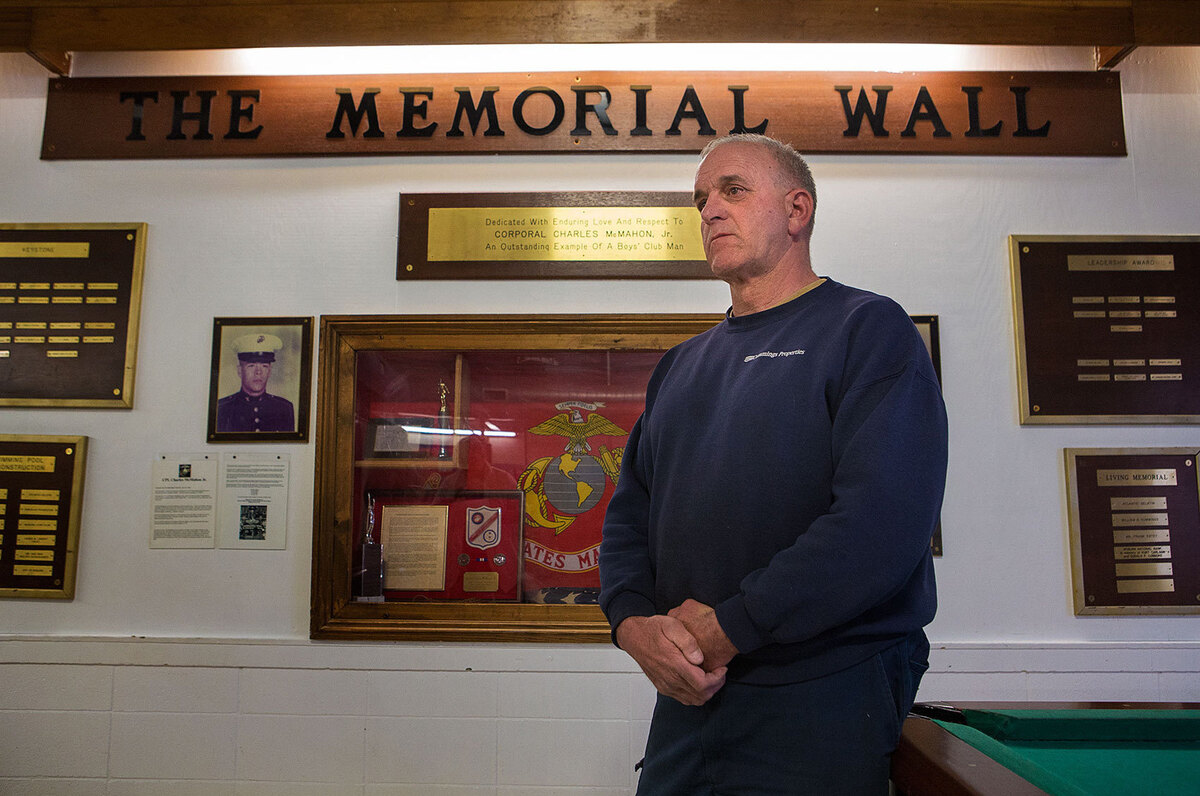 George Holland and Charles McMahon were best friends. The Woburn Boys and Girls Club, where the two spent much of their childhood, now has a memorial wall in McMahon's honor.

"Whenever he came home he would always tell me, bring your dress blues because we're going out to dinner in our uniform," Holland says. "His parents would take us out to a nice restaurant. And this was '74ish when being in the military maybe wasn't all that popular at the time. [He] didn't care, he was so proud to be a Marine and it was obvious to other Marines that he was."

In the Corps, McMahon became a security guard and was assigned to Saigon.

He arrived on April 18, 1975, and as a newbie was sent to what was thought to be a relatively safe place — Tan Son Nhut air base. Marine Cpl. John Ghilain was in the same unit stationed at the U.S. Embassy a few miles away.

"My thought process is, they were put in an area where we thought they would be out of harm's way," Ghilain says.

But on the day McMahon and Judge died, Ghilain says he could see the rocket fire.

It's believed McMahon and Judge were killed instantly at 3:30 a.m. when a rocket exploded at their post.

Judge was badly burned. McMahon's body was shattered. Their remains were taken to a nearby church.

After the North Vietnamese attacked the air base, U.S. evacuation plans changed. Helicopters were forced to fly out of the embassy. And in the confusion, the bodies of the two Marines were left behind.

A Mission To Bring McMahon Home

McMahon's family was devastated. Within weeks, they phoned their senator — Edward Kennedy, D-Mass. — and asked for help.

"I think that was something that came to him almost innately I would say," says longtime Kennedy aide Paul Kirk, who would later serve in the Senate himself.

"Charlie McMahon was obviously a Massachusetts constituent, I think Sen. Kennedy felt he had a special obligation to the family and also I would say that persistence was very much a part of his own constitution," says Kirk.

For months, Kennedy barraged officials in South Vietnam, North Vietnam, and the U.N.

Dale DeHaan worked for Kennedy back then. He says getting the bodies back became almost an obsession for the Senator. 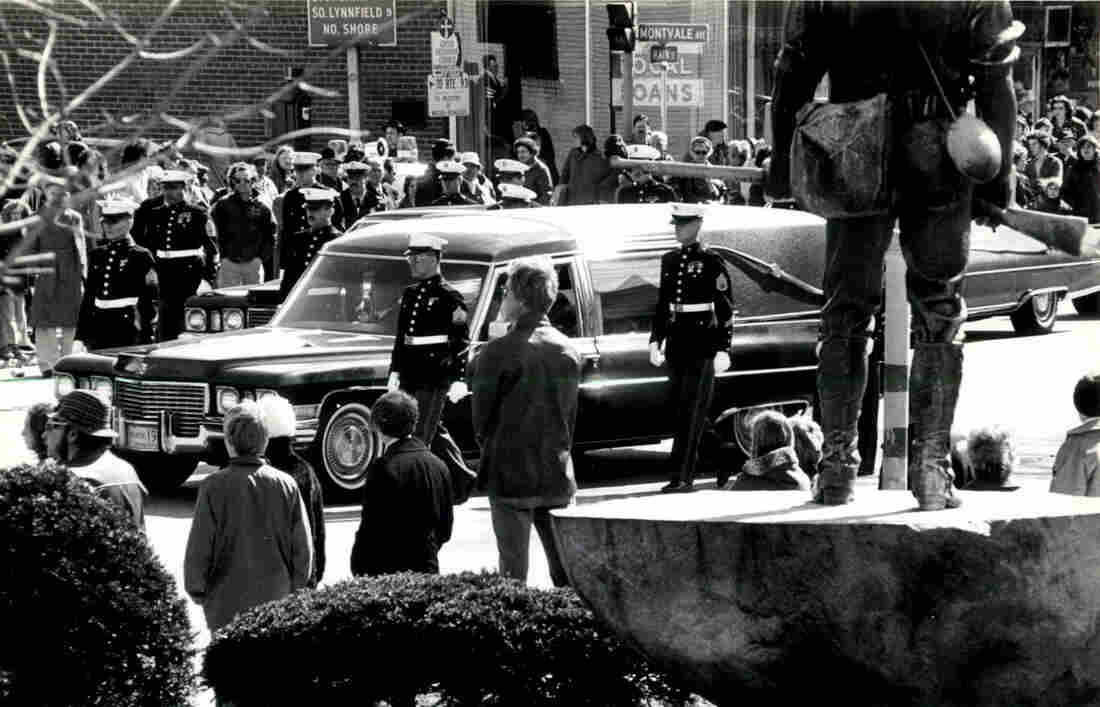 The procession when McMahon's body was brought home to Massachusetts. Courtesy of the Boys and Girls Club of Woburn hide caption

toggle caption
Courtesy of the Boys and Girls Club of Woburn

"Any channel we had to communicate the need for the repatriation of these Marines was important and we spent an awful lot of time on pursuing this very important issue for him," Dehaan says.

Months went by. Then, at the end of 1975, officials in Vietnam informed DeHaan and Kennedy that the remains had been located.

'He Insisted On Flags For The Caskets'

Two months later DeHaan took an Air France charter to Vietnam to collect the bodies. There were two sets of dog tags inside two wooden boxes holding the remains of Judge and McMahon.

"One of the things he insisted on was, he insisted on flags for the caskets," DeHaan says. "And before we left the Marine Commandant gave us the flags to use on the caskets before they were put on the plane so that when they were taken off the Air France they would be draped in the American flag."

A few weeks later in early March Judge was buried in his hometown of Marshalltown, Iowa.

McMahon, with Kennedy in attendance, was laid to rest in a cemetery just a mile away from what's now the Boys and Girls Club in Woburn, Mass.

In the club there's a memorial wall in McMahon's memory. It holds the U.S. flag that draped his coffin, his Purple Heart, and what Holland, his best friend, thinks would be his most prized possession: McMahon's 1964 Boy's Club membership card.