'SuperMutant Magic Academy' Is Hogwarts With Nuts (And A Cherry)

'SuperMutant Magic Academy' Is Hogwarts With Nuts (And A Cherry) 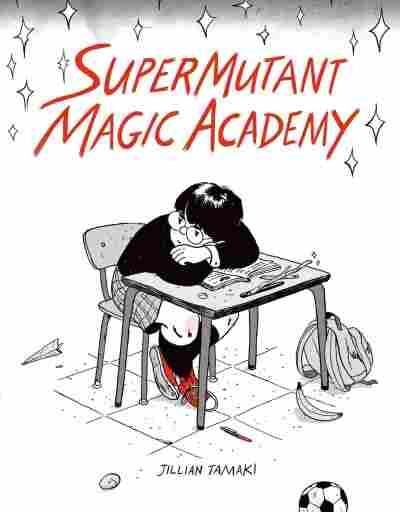 Imagine putting on a suit of armor to go to battle with a hot fudge sundae. That, Kurt Vonnegut famously said, is what critics are doing when they express "rage and loathing" toward novels. The metaphor has its limits — not all novels can be considered hot fudge sundaes — but there's one series that perfectly fits the classification: Harry Potter. J. K. Rowling's books are, collectively, the biggest, gooiest sundae there is. They're the kind of sundae assembled by a particularly indulgent ice cream-slinger, with extraneous sauces (a blob of butterscotch, a scoop of strawberries), fluffy lofts of whipped cream and a positive avalanche of nuts.

Critics, rageful or otherwise, have skirmished with the sundae in various ways. Lev Grossman threw a wet blanket over it in his Magicians trilogy. Christopher Hitchens went after it with a horsewhip — and references to George Orwell, Emmanuel Kant and Beowulf — in his New York Times review of Harry Potter and the Deathly Hallows.

Jillian Tamaki, on the other hand, throws marshmallows. In SuperMutant Magic Academy, her webcomic collected here in paperback, each installment is a puffy little sugar bomb. She doesn't actually seem to feel "rage and loathing" for Harry Potter; it's more like exasperated affection. Just like Hogwarts, her Academy has uniforms, broomstick classes, magical animals and the occasional witchy professor. Tamaki's heroine, Marsha, even looks like Harry with her glasses and untidy dark hair

Alongside them, though, are things that would make Harry do a double take. There's Evan, a.k.a. Everlasting Boy, who lives through centuries unscathed. He even shoots himself, only to decompose and be reconstituted as grass, then reform as himself again. There's Chaz, who does "his atomizing thing." As Marsha explains: "There's like, a special chamber thing he has to lay in. I guess it extracts atomic particles? Something to do with the Balance of the Universe, I think." Some — but only some — of the students have obvious mutations like lizard or bird heads. One is a cat, but it's unclear whether it has any special powers or should actually be a student at all.

The cat, like the people, is rendered in economical strokes of ink. Sometimes Tamaki's drawings are a bit sloppy, but that doesn't interfere with her unique humor. Instead, her hasty sketches create a casual vibe, a graphical command to not take any of this too seriously. It's the perfect approach to the Harry Potter phenomenon.

In Rowling's books, the prevailing source of irony was the juxtaposition of the mundane with the magical. Tamaki plays with that idea too, but only sometimes. Other times the magical element goes by the wayside; once in a while it's the mundane that vanishes entirely.

Take the attempt by one boy, a popular but nonconformist jock inexplicably named Cheddar, to play the guitar. He tries a few times and then, when he finally hits a good note, announces, "Breaktime." It's straight out of Peanuts. Then there are the strips that joke overtly about the supernatural, like one in which lizard-headed Trixie plans her modeling career.

Interspersed throughout, though, are jolts of straight-up weirdness. In one strip, Everlasting Boy soars through the solar system before pulling a swath of the starry sky over himself like a comforter. Another depicts different natural forms — a waterfall, a tree — with faces seeming to appear within them. Are these students who have changed their shapes? Have they somehow melded with nature? Or are they natural spirits made visible? There's no telling.

Some of the funniest strips simply play with our ideas of how high-school students act and think. A boy in a letterman's jacket, told that the pictures he took for his photography class look vaginal, goes home and tears his Georgia O'Keefe posters off the wall. Frances, a rebellious artist, gets in trouble for throwing pig's blood and glitter on male students. "Glitter, Frances! I'm never going to hear the end of it from Janitor Dan," says the principal. "Besides. Guerrilla performance art? A little ... seventies, no?" (Frances is horrified.)

See? Marshmallows. Each strip is an independent delight, and jammed together they're sticky and inescapable — just like their target. Ultimately Tamaki doesn't really embody Vonnegut's quote. She wants to tease Harry, not annihilate him. Thanks to that, she succeeds with a flourish: flinging missiles, but leaving the sundae standing.