Accessibility links
A Futuristic Private Eye Gets In Over Her Head In 'Depth' Lev AC Rosen's dystopian thriller, set in an underwater New York City, is an expert mix of the sci-fi and hardboiled genres. Reviewer Jason Heller calls it a nervy crime caper with hidden depths.

A Futuristic Private Eye Gets In Over Her Head In 'Depth'

A Futuristic Private Eye Gets In Over Her Head In 'Depth' 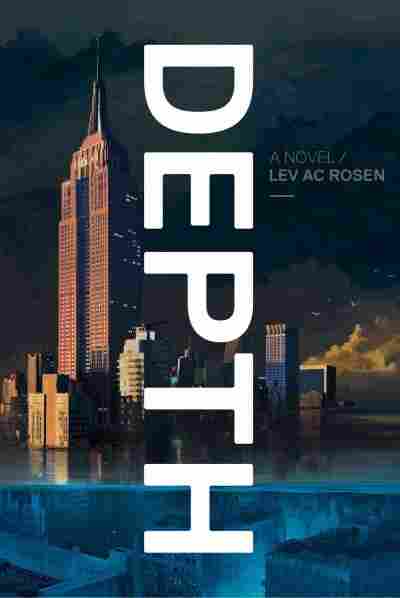 Lev AC Rosen is a native New Yorker — and he'd have to be in order to write Depth. In Rosen's latest novel, the United States of the 22nd century is an unrecognizable place: Climate catastrophes have flooded the entire Eastern seaboard, leaving Chicago a coastal town and the surviving flyover states an oppressive stronghold of religious conservatism. The inundated city-state of New York stands alone, tentatively still part of the U.S., but existing as a cluster of half-submerged skyscrapers connected by boats and bridges. It's a clever microcosm of New York City's real-life layout, that is, an interconnected network of boroughs. But Rosen's cleverest move is how he projects the elusive identity of the New Yorker into a frightening yet eerily familiar future.

Depth takes places a hundred years in the future, but it's unabashedly beholden to the past — namely the mid-20th century. Rosen has turned his drenched, decimated New York into a haven for private eyes, mysterious blondes, smoking pistols, and criminal plots waiting to be unraveled. Many authors have mixed the hardboiled genre with science fiction, from Philip K. Dick and William Gibson to Richard Morgan and Warren Hammond. Rosen, however, pulls off a tricky tactic: He keeps all that requisite grit intact while crafting a watery atmosphere that washes the city clean of its past, if not its sins. The spirit of hardboiled masters like Dashiell Hammett and Raymond Chandler are present, but Rosen uses his toolbox of detective tropes selectively, stopping well shy of pastiche while constructing a breathtaking backdrop that's equally fearsome and decadently alluring.

Every great detective story needs a great detective, and Depth's is Simone Pierce. The daughter of a disgraced cop who lives her life alone, one the edge, and by her wits, she's got a new client: An enigmatic foreigner who's a "pearl diver" — a speculator intent on exploring the vast majority of New York that's long since disappeared under the Atlantic. Simone's best friend is deputy mayor Caroline Khan, which puts Simone in a tight spot — especially after a seemingly unrelated murder investigation begins to dovetail with her new case. Rumors of an abandoned tunnel system leading out of the city bring out the wolves, and the web of alliances, betrayals, cover-ups, and dead bodies tightens around Simone, whose beloved New York suddenly becomes unknowable. And lethal.

Viewed strictly as a detective yarn, Depth is a sturdy, no-frills exercise. Rosen doesn't subvert the genre; he revels in it. Rather than diluting noir's shadowy textural and moral murk, his use of science fiction heightens the tension — not to mention the stakes. New York is no longer considered anything more than a satellite of America, but the fate of the entire country hinges on what's uncovered — or what remains buried — during the course of Simone's perilous investigation. Considering the setting, it would be easy to assume the book pontificates about climate change. Rosen isn't so obvious. Instead, he probes the uneasy relationship between coastal cosmopolitanism and backwater bigotry. He doesn't let New York off the hook, though, and his clear-eyed look at the sociopolitical dynamic of American culture transcends the deceptive simplicity of his nervy crime caper.

Rosen makes it all feel effortlessly plausible, but never at the expense of steamy, pulpy brio. Simone is a classic detective hero, tough yet vulnerable, prickly yet charismatic, who operates according to a personal code born of hard luck and ocean-deep loneliness. Depth is also starkly glamorous, telegraphed in clipped prose and sharp dialogue that's as taut as a garrote.

Behind it all, the haunting specter of a ghostlike New York looms, a paradoxical place full of opportunity, arrogance, freedom, and fear. "Truth is," Simone tells Alejandro de Costas, the sexy client with an unfathomable agenda, "we don't get many people moving in or out of New York. You're a born New Yorker, you stay one. Some people move in, but they tend to leave one way or another after they got what they came for or realize they never will." Spoken, and written, like a true native.