Accessibility links
Ohio Kidnapping Survivors Recount Captivity, Escape From Horror In 2013, three young women who had vanished years earlier escaped from a house where they had been held captive. Amanda Berry and Gina DeJesus, along with writer Mary Jordan, discuss their new memoir. 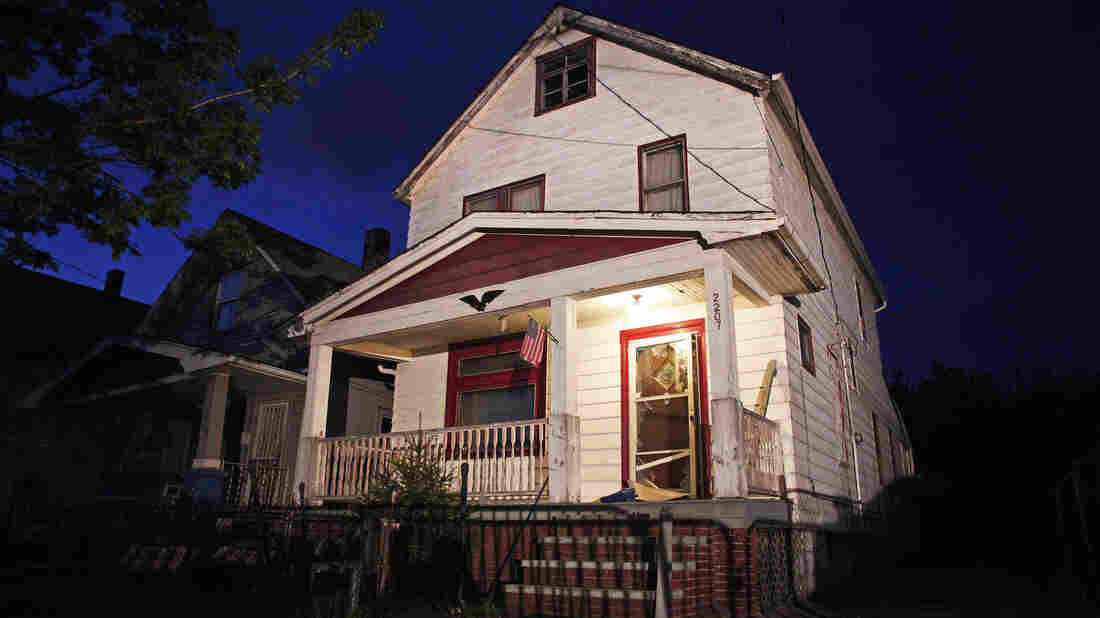 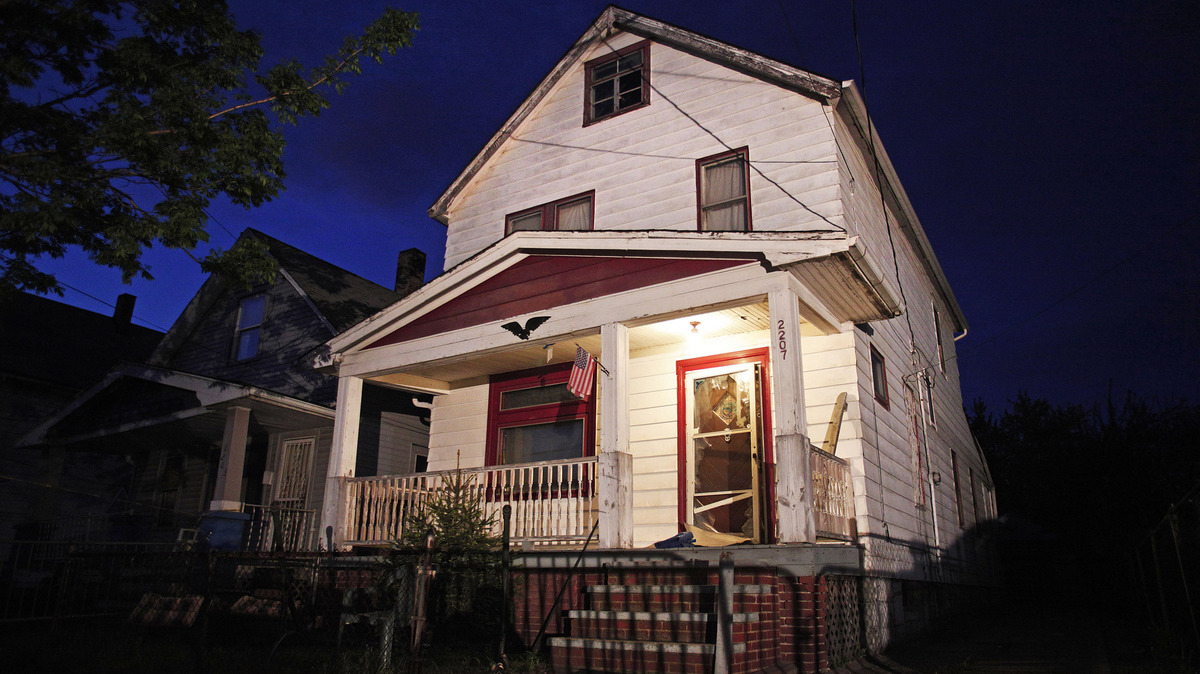 House of horrors: The exterior of the Cleveland house where Amanda Berry, Gina DeJesus and Michelle Knight were held captive.

On the day before her 17th birthday, in 2003, Amanda Berry disappeared as she made her way home from her job at a Burger King in Cleveland. A year later, another Cleveland teen, 14-year-old Gina DeJesus, vanished while returning from middle school. Searches for both girls came up empty, and as the years passed it seemed less and less likely that either girl would ever be seen again.

In fact, the girls were still in Cleveland. They had been abducted by a man named Ariel Castro, who had kidnapped another young woman, Michelle Knight, in 2002.

'Monument To Hell' Is No More: Cleveland Rapist's House Is Torn Down

Berry, DeJesus and journalist Mary Jordan tell Fresh Air's Terry Gross about the girls' years in captivity, during which time Castro kept Berry, DeJesus and Knight chained up in his boarded-up home. He raped them and nearly starved them to death. Berry became pregnant with Castro's child, a girl named Jocelyn, who was born in 2006.

Finally, on May 6, 2013, more than 10 years after she was abducted, Berry saw an opportunity to escape. Castro left the house and neglected to lock one of the doors. Berry ran to the unlocked door, but was stopped by a second locked door. She started flagging down a neighbor.

"The neighbor next door, he saw me waving my hand down and I'm kind of going crazy on the door," Berry tells Fresh Air's Terry Gross. The neighbor "was just looking at the door to figure out something. So he kind of kicks the bottom ... so I kicked it out a little bit more just enough so I could fit through there and I climbed out and then I had my daughter climb out and we were free."

Berry called the police, who were shocked to find the girls alive.

"The whole miracle in this story is that the longer someone is kidnapped the less likely [it is] that they are alive," Jordan says.

Castro was arrested soon after and later sentenced to life plus 1,000 years in prison. He committed suicide after serving about a month in prison.

Berry and DeJesus, with the help of Jordan and fellow journalist Kevin Sullivan, recount the story of their captivity and escape in Hope: A Memoir of Survival in Cleveland. 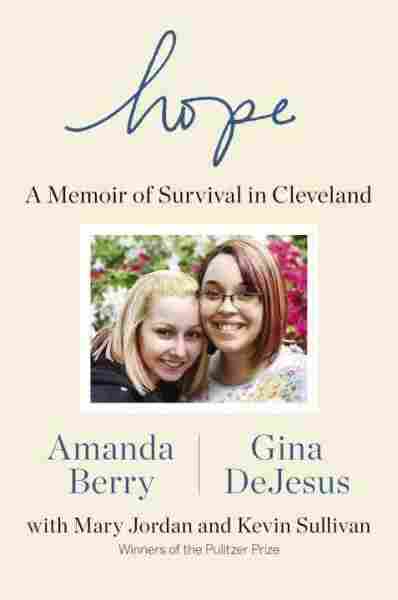 A Memoir of Survival in Cleveland

On getting in Castro's car and realizing it was a mistake

DeJesus (who was kidnapped in 2004): I was kind of freaking out a little bit when he didn't turn around, but then when he started talking to me about his daughter and how he was going to take his daughter to the mall and stuff, I kind of, I little bit relaxed, but not really because I was still a little scared.

Berry (who was kidnapped in 2003): He wasn't mean in the car. Like, he was talkative and he kept the conversation going and he was talking about his kids and how one of his kids worked at the Burger King that I worked at because I had my uniform on, so he was talking about that for a couple of minutes. I couldn't tell that he was this horrible man talking to him in the van.

On being chained in the house

Berry: [It was] like 5 feet, I think? I couldn't really do nothing. You had enough room to get up and use the bathroom or something like that. ... There was a garbage can in there that I had to use for the bathroom.

It was tough trying to sleep. That chain was around my stomach and there was a big lock on it. ... So many times I wanted to turn onto my side I would have to move the chain to put the lock on the front of my stomach or I'd be lying on this big chain and this big lock and it was just uncomfortable.

On how Castro managed to keep his kidnappings a secret

Jordan: He was very clever. You can't underestimate how smooth he was. ... If you walked down the street, you didn't see that he had put a door and nailed it to those windows and had quilts [up], because he had pulled the curtains. He had the curtains inside and he tidied up his front lawn. His house was a mess because he was a big hoarder, but he was very clever. He was saying hello to neighbors; he was sweet; he drove the school bus; he was good to his friends. He just had a double life and when he walked inside his front door, he became a whole other violent person.

On Castro's sex addiction and history of domestic violence

Jordan: He had a real problem with women to say the least. ... Before he started kidnapping girls he had a common-law wife and he beat her ... he stomped on her head, broke her teeth. He said to Amanda and Gina in the house that he hated his mother. He also, by the way, went to [his mother's] house. He was very hard to figure out.

On getting pregnant and having Castro's baby

[When she was older, my daughter] saw the chains and we had to tell her that they were bracelets and she would notice that he would lock the door when he left and she would ask him, "Why do you lock to door?" and "Why can't you leave the door unlocked? Why can't you leave the door open?" And he would just come up with a story to tell her and that would be that.

On hearing a recording of Berry's 911 call

Jordan: You can hear how desperate and frantic it was ... that desperation in the voice was chilling. It really went through the city, right through the spine of the city, "Help me, help me, I'm Amanda Berry."

On re-entry into everyday life

Berry: It was scary at first, I mean, it still is a little bit. I kind of had to get used to everything again, and people and just everyday life. It wasn't easy. ... Even if you're going to the store to pay for something, something as simple as that, you're just not used to it. Or walking to the park, I was scared for a while to even walk outside by myself.

DeJesus: Trusting people and walking to the corner store and always looking back to see if someone is right behind you, ready to take you or something.

On why she wanted to tell this story

Jordan: I've been a correspondent and lived around the world and seen really sad, painful tragedies and you always wonder how people can get through pain, and here I talk to Amanda and Gina and made lifelong friends and helped them try to explain to everyone else how you do it. ... what you do is you find a mental life raft, somehow. They'll tell you. For Amanda and Gina, their life raft was — they clung to hope that they would get out of there — that they would outlast their captor and they would get back to their families.