Accessibility links
Vietnam Veterans' Memorial Founder: Monument Almost Never Got Built Jan Scruggs commemorates the 40th anniversary of the end to the Vietnam War with a walk along the memorial he pioneered building. 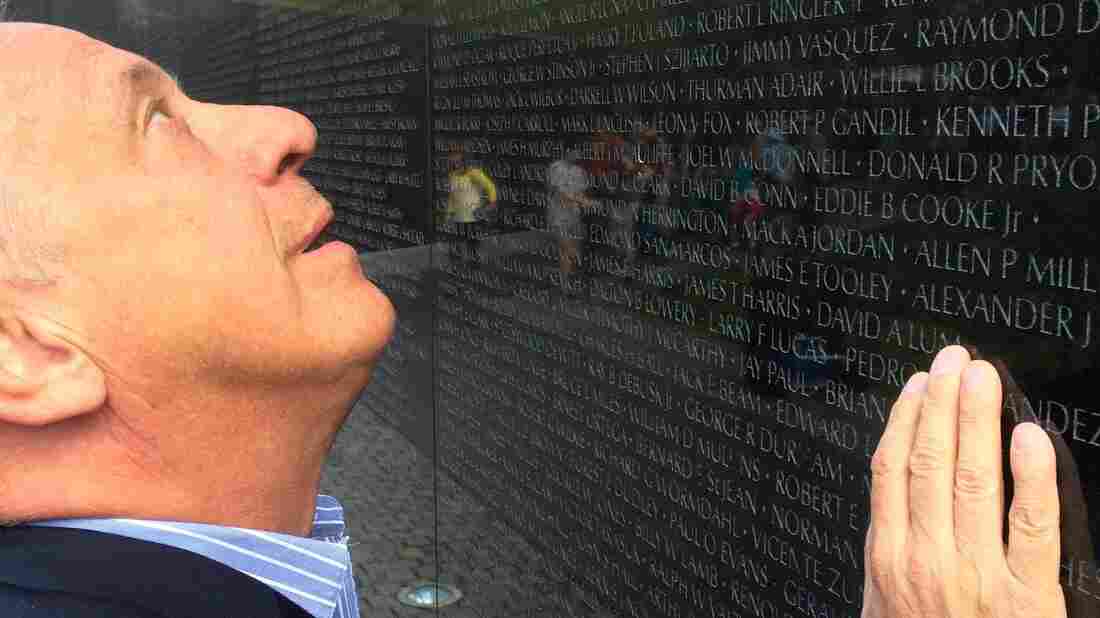 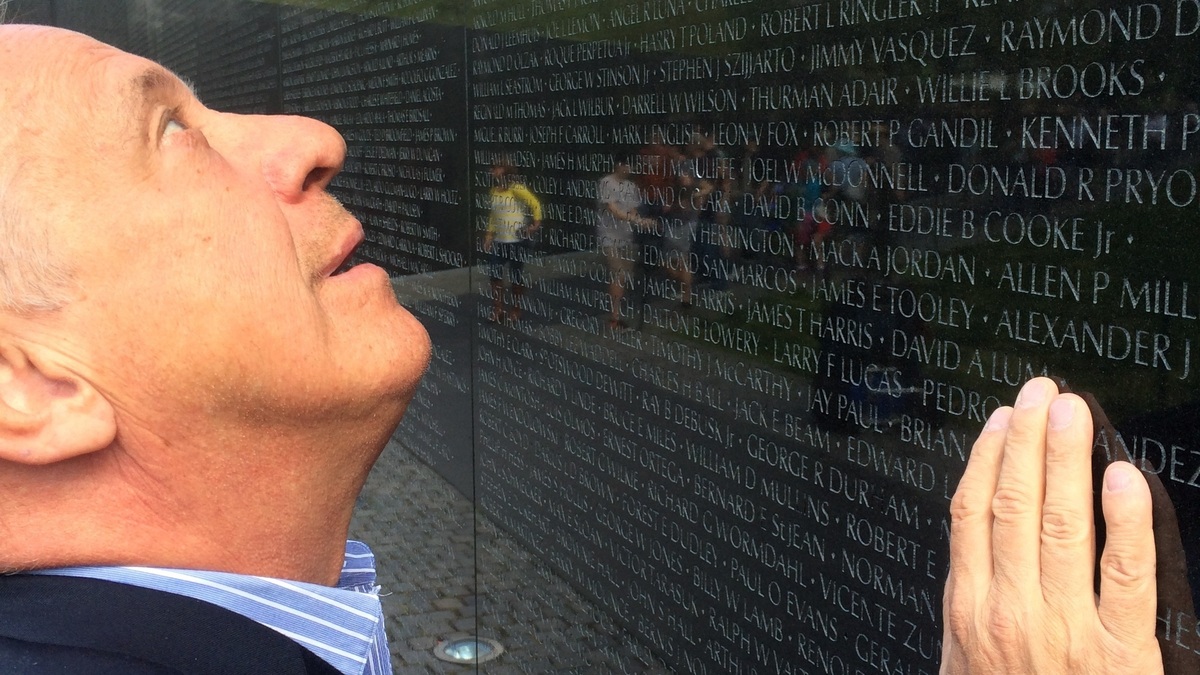 Jan Scruggs gazes up at the names of fellow military service members inscribed on the Vietnam Veterans Memorial in Washington, D.C.

On a perfect spring morning, Jan Scruggs walks along the site overlooking the wall of the Vietnam Veterans' Memorial in Washington, D.C. Contrasting the bright colors of blooming trees and flowers is the black granite carved with the names of more than 58,000 Americans who served during the war.

Scruggs, a veteran himself, is credited with getting the memorial built. He's now preparing to retire. Morning Edition met Scruggs to learn the story of how the memorial was built, honoring the dead from a war that ended 40 years ago, on April 30, 1975.

"This is absolutely the perfect day to do this because you can see the even flow of human traffic here," he says. "What kinds of people? There are 14-year-old people, 15-year-old people."

Scruggs' own story involves getting wounded in Vietnam just after high school. At that time, he was only 19, barely older than the teens who were visiting the memorial that day. He says pieces of shrapnel remain in his body still.

When he returned home Scruggs got to thinking of wounds not of the body, but of the mind. His brooding on that subject, and his academic study, led to one of Washington's most distinctive memorials.

"I had a theory that we could put all the names on the wall. This is based on the thought of Carl Jung, a student of Freud. [He] writes about collective psychological states, and how we're all sort of drawn together," he says. "Certain things hold us together. People who die in wars for a country, this is something we all agree on --you can't forget them."

From that first thought, Scruggs instigated a contest for some way to put all the names of the dead on display. Maya Lin, a young architecture student at the time, won. The memorial she designed opened in 1982, but amid controversy. The distinctive black granite was seen by some as a symbol of defeat.

Scruggs says the design was really meant to help veterans manage post-traumatic stress while also helping the country move on without forgetting.

"Just as the individual military participants in the Vietnam War needed to be healed, so too did the entire nation," he says.

Scruggs says that when he first saw the design he knew it "was going to be difficult to explain." His Vietnam Veterans Memorial Fund needed public relations crisis managers to help answer those persistent questions.

"This almost killed the whole project," he says. "This thing almost never got built.

The public relations specialists assured Scruggs he would just have to wait. Eventually the controversy would become a historical footnote.

40 Years After The Vietnam War, Families Still Search For Answers

"Everybody loves it," he laughs.

Since the memorial first opened, a couple of more traditional elements were added, including a soldier's statue and a women's memorial.

"Because this was such an unconventional work of art, we had to find a way to make the opponents happy," Scruggs explains. "We did that by having a compromise meeting. And they wanted a traditional, three-servicemen statute."

A touch of impatience still echoes in his voice. But all these years later, Scruggs says that political compromise made the memorial better. He especially approves of a women's memorial.

The centerpiece remains the wall of black granite, low on each end, high in the middle. Scruggs walks from one end to the other. As he dropped lower, the black wall rose higher. He began to raise his shoulders, his hands folded in front of him. But Scruggs denied being tense.

The wall still seemed to affect him, even though he believes he has probably visited more than 2,000 times. It turns out, Scruggs hadn't been at the memorial for a while.

Of the 58,000 names on the wall, many are of Scruggs' friends. Climbing upward, he moved along the wall as it slowly dropped beside him. On the far side, he stopped to contemplate.

For such a busy spot, the scene was also very quiet. Scruggs explains why:

It becomes apparent that Scruggs still feels it, even after all this time.

"I knew some of these kids from high school. Just like me, went into it because their dad was in Okinawa or Iwo Jima and they wanted to do the same thing, serve their country," he says. "And at age 19 or 20, they're dead."

Scruggs acknowledges it was a big task to take on but was determined to do it.

"I wanted to even the score," he says.

Scruggs' eyes appeared to redden as he spoke. After all, he was finishing decades of tending to the Vietnam Veterans Memorial. Yet, a minute later, he was fine.