Accessibility links
Citing Religious Beliefs, Muslim Gitmo Inmates Object To Female Guards A judge has blocked women from shackling and escorting the five Muslim men on trial for plotting the Sept. 11 attacks. Soldiers, in turn, have filed Equal Opportunity complaints against the judge. 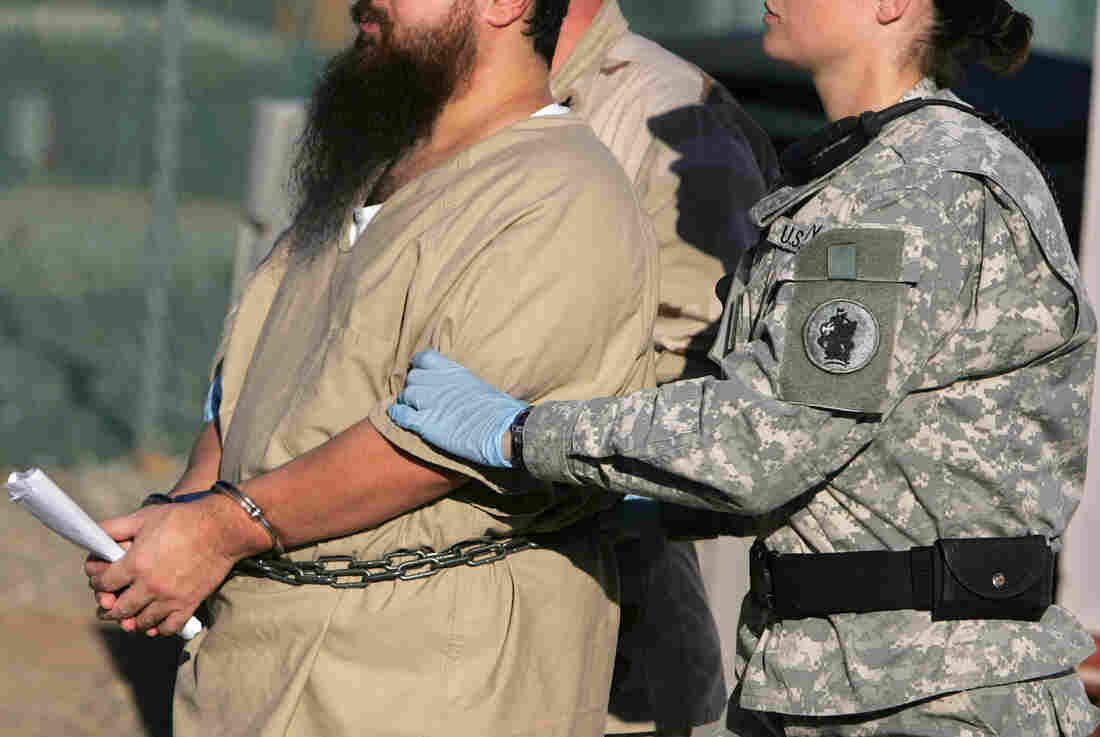 A shackled detainee is transported by guards, including a female soldier, at Camp Delta detention center, Guantanamo Bay U.S. Naval Base, Cuba, in this photo from December 2006. Brennan Linsley/AP hide caption 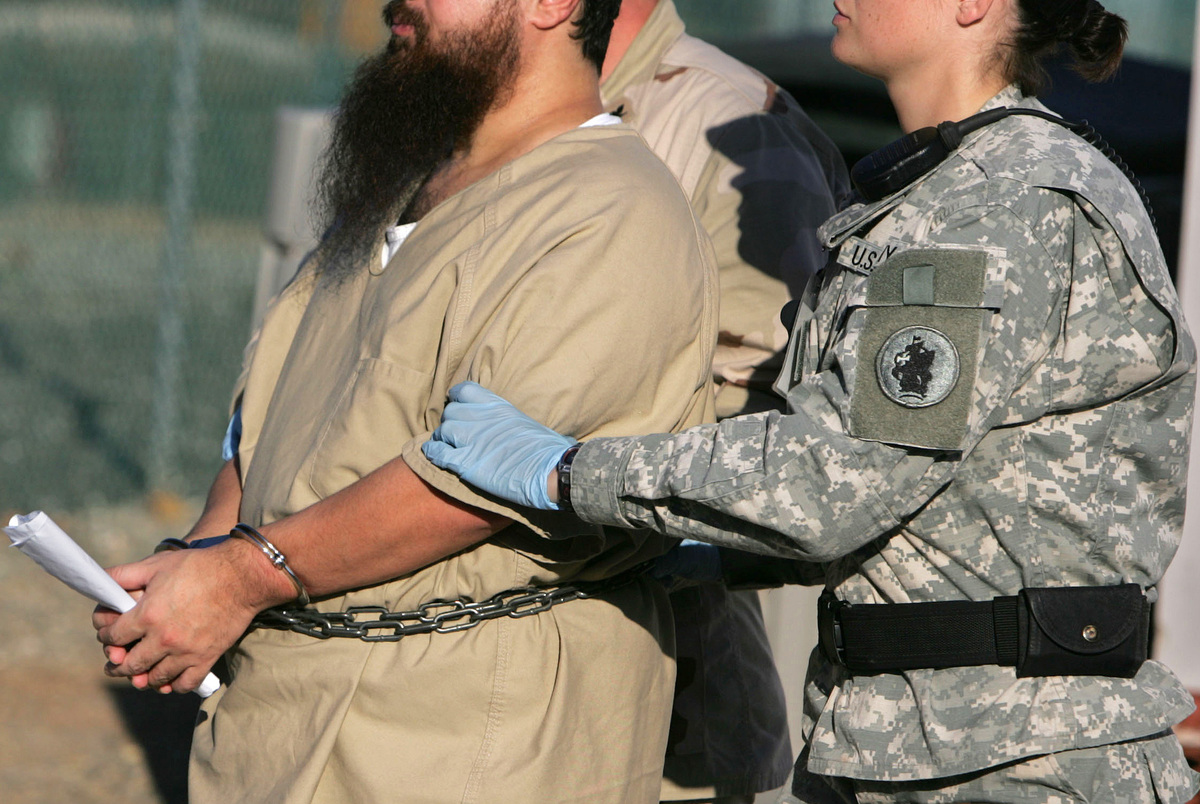 A shackled detainee is transported by guards, including a female soldier, at Camp Delta detention center, Guantanamo Bay U.S. Naval Base, Cuba, in this photo from December 2006.

A clash between Muslim inmates and the female soldiers assigned to guard them has led to a standoff at the lockup in Guantanamo Bay, Cuba.

A judge has blocked female guards from shackling and escorting five Muslim men being tried for plotting the Sept. 11 attacks. Soldiers, in turn, have filed Equal Opportunity complaints against the judge.

Walter Ruiz is the lawyer for one of the Guantanamo detainees who object to being escorted by female guards.

During the first six years he represented him, Ruiz says, only male guards had touched his client — that is, until last fall, when female members of a National Guard unit became part of the team that shackled him.

Ruiz says his client refuses to leave his cell if women are on the escort team because Muslim men can only touch women they're related to.

Religious Belief Or Manipulation Of Court?

Today, no female guards are allowed to handle the defendants in the Sept. 11 case. The judge presiding in that trial, Col. James Pohl, has refused to lift his restraining order.

"When the 9-11 attackers don't want women guarding them, it's absurd, and I don't think we should be accommodating that," she said.

Ayotte directed her remark to Gen. John Kelly, the head of the U.S. Southern Command, who's in charge of Guantanamo. Kelly told Ayotte he disagreed with the judge's order, but there was nothing he could do about it. He suggested the judge had been misled.

The general said the five Sept. 11 defendants and their lawyers were manipulating the court trying their case.

Ruiz, the lawyer for one of the defendants, finds that comment telling.

"When General Kelly makes that kind of statement, it's very clear that he doesn't really understand what is happening in the detention center that they're supposed to be supervising," Ruiz says.

And that's not the only issue, says David Nevin, who represents alleged Sept. 11 mastermind Khalid Sheikh Mohammed. Nevin says it's also a matter of showing respect for a well-established tenet of Islam.

"There's a problem, a religious problem, protected under the First Amendment to the U.S. Constitution, with having women touch men," Nevin says. "It's just something that's not done."

Which is why, Nevin says, female guards simply cannot escort these Muslim men.

"So while it is, you know, completely desirable and understandable for women to have a greater role in the military, there's no explanation for why it absolutely has to be applied in this way, in this place, and that's the problem," he says.

That problem has gone away with the judge's restraining order against using female guards — an order Kelly says he has to abide by.

"I'm almost ashamed that I'm doing it because I am discriminating against my soldiers because they're female," he said. "They're trained. They're capable. They're ready."

The U.S. Southern Command says it has investigated the Equal Opportunity complaints filed there by unidentified National Guard members. Some were women, who said they'd been discriminated against by the judges' restraining orders; about half were men, who complained those orders increased their work loads. The findings of that probe have yet to be made public.