Accessibility links
An Ohio Couple Would Like To Forget 'A Gronking To Remember' A lawsuit alleges that the popular erotica e-book — which centers on Patriots tight end Rob Gronkowski — used an engagement photo on its cover without permission. 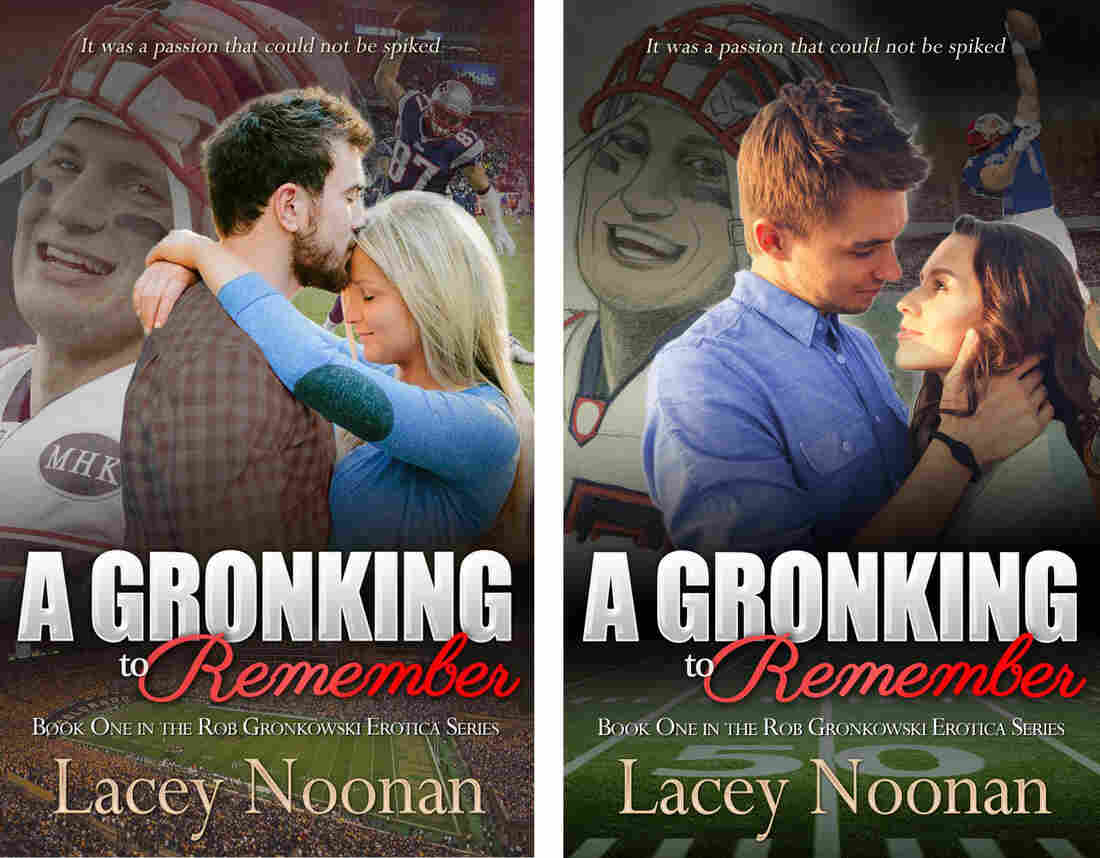 The image of the couple featured on the e-book's original cover (left) was used without permission, according to a lawsuit filed against Amazon, Barnes & Noble and Apple. On Amazon's Kindle store, a new cover image (right) replaced the original one. Amazon via The Daily Beast (left); Amazon (right) hide caption

When Lacey Noonan — the pseudonym chosen by the author — self-published the e-book, she didn't expect much. The novella went up for sale on Amazon, Apple and Barnes & Noble last December, and to her, it was mostly a joke. ("Obvious satire and parody," she later called it.) Boston media, obsessed with all things Patriots, covered the book with glee. Sales took off.

A few weeks later, as Gronkowski and his teammates were preparing to play in the Super Bowl, Gronkowski was asked about it at a pre-Super Bowl media day in Phoenix. "Oh, I've heard all about it," he said. "I think it's pretty funny." Following his team's Super Bowl victory, he appeared on Jimmy Kimmel Live! and performed a dramatic reading.

But even with great publicity, the e-book had problems. In early January, Amazon pulled it from its website, reportedly over a dispute about the cover art — which featured an attractive young couple in a romantic embrace. Behind them were two faded photos of Gronkowski in his Patriots gear.

The Boston Globe speculated that the Patriots or the National Football League had objected to the cover. The league is very strict about licensing of various logos and uniforms. The NFL would not comment. The book came back online — this time with a drawing of Gronkowski instead of photos, and no logos.

This week, Eriq Gardner, who covers business and the law for The Hollywood Reporter, broke the news that the cover art had yet another issue. A lawsuit was filed against Apple, Barnes & Noble and Amazon by an Ohio couple claiming "that their faces were put on the book cover without their permission," Gardner says.

"Apple and Amazon — which are providing the tools for authors to self-publish — are they in some ways considered publishers or should they be granted some sort of immunity from what authors put forward and distribute?"

What's interesting about the case, Gardner says, is that it brings into question who exactly the publisher is for a self-published e-book. "Apple and Amazon — which are providing the tools for authors to self-publish — are they in some ways considered publishers or should they be granted some sort of immunity from what authors put forward and distribute?" he says.

Amazon, in particular, provides tools for self-published authors to do things like create cover art. It provides stock photography but also allows authors to upload their own cover art. In its legal response, Amazon claims it was unaware of the unauthorized use of photos on the cover of A Gronking to Remember.

In the meantime, A Gronking to Remember is back for sale online, this time featuring a new young couple embracing on the cover.