Accessibility links
Review: Joanna Gruesome, 'Peanut Butter' On a sophomore album that packs 10 songs into less than 22 minutes, the Welsh band showcases its considerable gift for balancing sweetness and chaos. 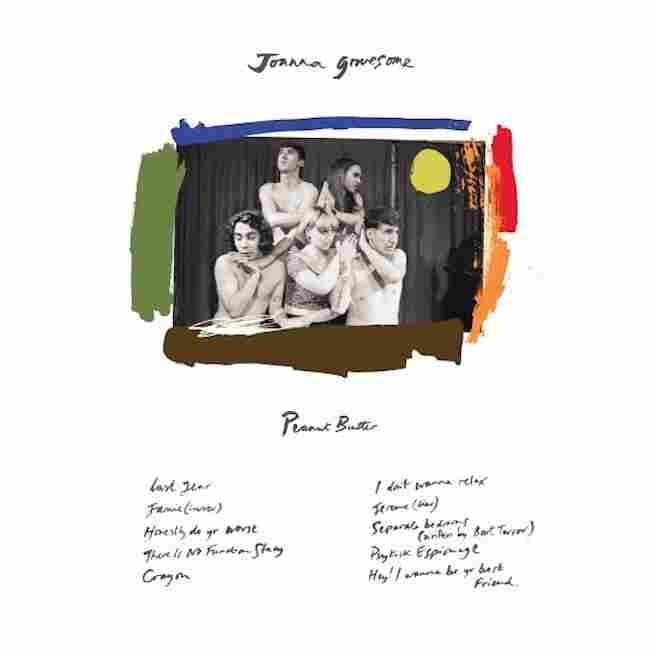 The story goes that members of Joanna Gruesome first met in 2010 at an anger-management group, and bonded over a mutual love of hardcore and writing songs as musical therapy. Whether fact or a myth that's grown in the telling, it's an origin perfectly matched to the Cardiff band's biting, bittersweet songs. Punk is about ratcheting up tension, whether through cranked-up amps and explosive drumming or howling above the fray. That's one side to Joanna Gruesome's fast and fuzzy music, but the band is just as adept at offsetting dissonance with tender, wistful pop melodies as a song reaches its breaking point. It's the sound of pent-up angst unleashed, only to uncover the pain and heartache at its core.

Led by singer Alanna McArdle and guitarist Owen Williams — alongside bassist Max Warren, guitarist George Nicholls and drummer David Sandford — Joanna Gruesome first caught attention for its punny name, which references a certain harp-playing songwriter. But thanks to its grungy 2013 debut (Weird Sister) and brash live performances, Joanna Gruesome has quickly become one of the U.K.'s most exciting bands, while maintaining a potent work ethic that defines its music.

With its follow-up, Peanut Butter, Joanna Gruesome refrains from tweaking its own formula too much, instead dispensing more of what we've come to expect, but doing it better: Recorded with Hookworms frontman MJ, the band sounds tighter and more dynamic, with catchier choruses and more assured singing. Peanut Butter's 10 songs clock in at only 22 minutes — about seven minutes shorter than its predecessor — but the band crams just as much energy and depth into a more compact and vital package.

Right from the jump, "Last Year" opens with a burst of feedback as McArdle shouts a string of grievances, chanting "I will not!" in her best hardcore voice. Then, Williams' and Nicholls' thick, chugging guitars give way to dreamy pop, helping to lift McArdle's vocals above the static that surrounds her. That heavy-turned-hooky template is a constant throughout Peanut Butter -- from the scorched guitars of "Psykick Espionage" to the jangle of "There Is No Function Stacy."

Lyrically, McArdle and Williams write sparsely, often playing with surrealism ("A sonic question, a liner shore / Crayon aquatic, the manager's eyes," from "Crayon") or with humor ("They all write about you like you're a monkey playing a tuba," from "There Is No Function Stacy"). Joanna Gruesome's true strength, however, is its hyper-specificity — telling personal stories through snippets of conversations and inner monologues ("I Don't Wanna Relax"), calling out exes ("Jerome [Liar]") and painting quiet moments that feel real. When singing in unison, almost as one voice, McArdle and Williams' words tend to shift points of view: "I've got to change my ways, I know, right / I've got to tell you truly, I like you / Plus I wanna walk there with you, boy," they both sing in the pining "Jamie (Luvver)."

Those details help Joanna Gruesome depict themes of fading love, exasperation and an inability to connect: "You only say you want me when you're tired in your room" ("I Don't Wanna Relax"), or "Bite through every part / Are you gonna chew till you reach the heart?" ("Honestly Do Yr Worst"). Elsewhere, in "Separate Bedrooms" (a cover of a song by Black Terror), Joanna Gruesome reflects on an eroding relationship, or a friendship that could evolve into something romantic yet remains unrequited: "I know trying to make you fall in love is something I should not do / Maybe part of the reason this is easy is knowing I can't have you," they sing, before the song's final refrain: "I know that life would be all right if I hadn't met you / We could spend every single night in separate bedrooms." When set against a flurry of distorted guitars and volatile noise, the vulnerability in their voices carries weight, demonstrating Joanna Gruesome's considerable gift for balancing sweetness and chaos.