Accessibility links
Review: Buffy Sainte-Marie, 'Power In The Blood' On her first studio album since 2008, the 74-year-old firebrand's voice remains relevant, full of spit and vinegar and fun. 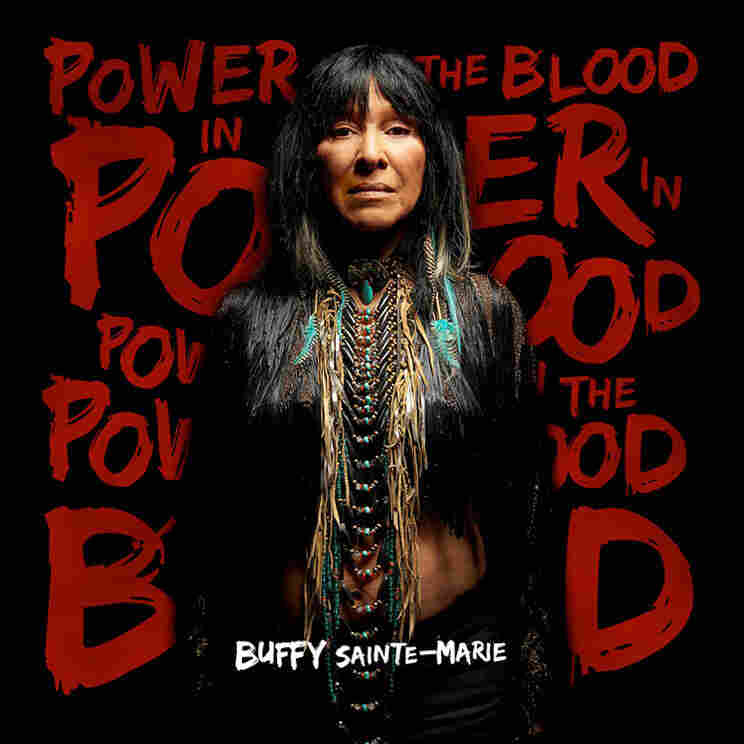 It's tempting to mythologize Buffy Sainte-Marie — to call her a folk-music mother of dragons, or at least a shaman calling up lost spirits in her music. It's easy, after all, to exoticize individualistic women, especially women of color; doing so can even feel like offering a compliment. But on Power In The Blood, her first studio album since 2008, the 74-year-old firebrand defies categorization, as she has throughout a half-century of recording. Those who know her mostly by reputation as a standout of the early-'60s folk revival will be delighted to discover an artist who's more Bjork than Baez, more Kate Bush than Laurel Canyon. Sainte-Marie is a risk-taker, always chasing new sounds, and a plain talker when it comes to love and politics. She believes in magic — but the practical kind, nurtured through centuries of rituals and shaped into songs meant to wake up the world.

Power In The Blood serves as an introduction to Sainte-Marie's extensive catalog and a powerful statement in its own right. Recorded in Toronto with three of Canada's top producers — Michael Wojewoda, Chris Burkett and Jon Levine, all known for pop hits as well as more esoteric material — the album features adventurous reworkings of classic Sainte-Marie songs alongside two surprising covers and new material. Still a fiery singer with a touch that can be as strong as a street protester's or as playful as a rock 'n' roller's, Sainte-Marie gives her collaborators room to play with samples, beats and arrangements that range from classic rock to delicate electronic music, all the while keeping her attention-grabbing, yarn-spinning voice at the center.

The first notes of Sainte-Marie's new version of her signature song, "It's My Way," which features acoustic guitar lines blended with striking synthesizer sounds, remind listeners that this woman so versed in folkways has long experimented with electronics, too. The title track, originally by English folktronica band Alabama 3, loops in elements of the original as Sainte-Marie claims it with a fierce, Dylan-esque vocal. A Cree chant, sampled from a traditional drum group, repurposes the reggae beat of UB40's anti-apartheid "Sing A New Song," turning it into a cry of the heart from all colonized peoples. Two songs from Sainte-Marie's long "blacklist" period, when her activism led to a near-silencing of her work on American radio, stick fairly closely to the originals, with the singer conjuring the spirit of one too long repressed.

The new works, however, are Power In The Blood's biggest treat. The countrified love song "Farm In The Middle Of Nowhere" and the sensual lullaby "Ke Sakihitin Awasis" exude sexiness that doesn't need to be limited by the label "mature." "Uranium War" extends the story Sainte-Marie began telling in her 1996 broadside "Bury My Heart At Wounded Knee," demonstrating that such jeremiads are still relevant. The delicate "Orion" transforms music by the late composer Jack Nitzsche into a dreamy elegy. And "Carry On" is an anthem that, in its classic joyfulness, suits these troubled times.

Too often, elders like Sainte-Marie are venerated without actually earning a serious listen from people not of their generation. But this woman's spirit isn't sitting down yet. Her voice remains relevant, full of spit and vinegar and fun. It could even renew the spirit of some whose blood has grown weak.