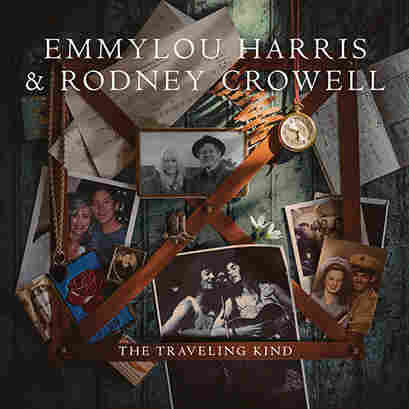 The Traveling Kind Courtesy of the artist hide caption

It took Emmylou Harris and Rodney Crowell nearly four decades to get around to making their first duets album, Old Yellow Moon, and just two years to follow it with The Traveling Kind. Their collaborative debut may have swept two of the biggest awards in their genre — a Best Americana Album Grammy and Album Of The Year at the Americana Awards — but there were more powerful incentives for them to team up again.

They'd found each other early in their lives and careers, Crowell becoming Harris' Texas-bred harmony-singing partner and one of her primary song sources while she found her footing as a tradition-celebrating West Coast country singer the longhairs could love. And to Old Yellow Moon they brought what this writer described as "a long-running, non-romantic back story that's given them empathy, trust and the ability to help free each other from self-consciousness." Vocally, they nudged, teased and cradled each other, not "acting their ages so much as inhabiting every age they've ever known each other to be."

That album was a chance for Harris and Crowell to savor simply singing older songs together. For The Traveling Kind, they spent time co-writing, something they've only occasionally done together in the past, cultivating the intimately shared language that appears in the title track. "We don't all die young to save our spark from the ravages of time," they begin, softening their deliveries as they reach the verse's lived-in conclusion: "But the first and last to leave their mark someday become the traveling kind."

To generations of folk, country and roots listeners, these two are, indeed, archetypes of trend-outlasting creative restlessness, having each navigated their ways through various seasons of cultural currency, commercial appeal and high-concept artistic reinvention; she's revered as an interpreter, while he's a songwriter for the ages. Here, they consciously embrace the full breadth of their expression, from the elegant sentimentality of "Higher Mountains" to the hardcore country heartache of "You Can't Say We Didn't Try," the breathless, country-rocking edge of "I Just Wanted To See You So Bad" (a vintage Lucinda Williams number), the earthy introspection of "Just Pleasing You" (culled from Crowell's co-writing experiment with his memoirist mentor Mary Karr) and the sprightly, down-home Cajun heat of "La Danse De La Joie."

As they swap lines and leads between his reedy resilience and her gossamer vibrato, Harris and Crowell don't just share the spotlight. They also share the weight of legacy, influence and lifelong artistic investment, bearing down when the emotional heft of a song calls for it, loosening up and growing playful when it doesn't, and altogether lightening the load for each other. This is what it sounds like when true equals, both deep into their journeys, draw out the best in each other.