Accessibility links
'Mad Men' Skates Across A Changed And Changing Landscape Mad Men's third to last episode was a hard one for Joan, a better one for Peggy, and perhaps a pivotal one for Don — or the man we know as Don. 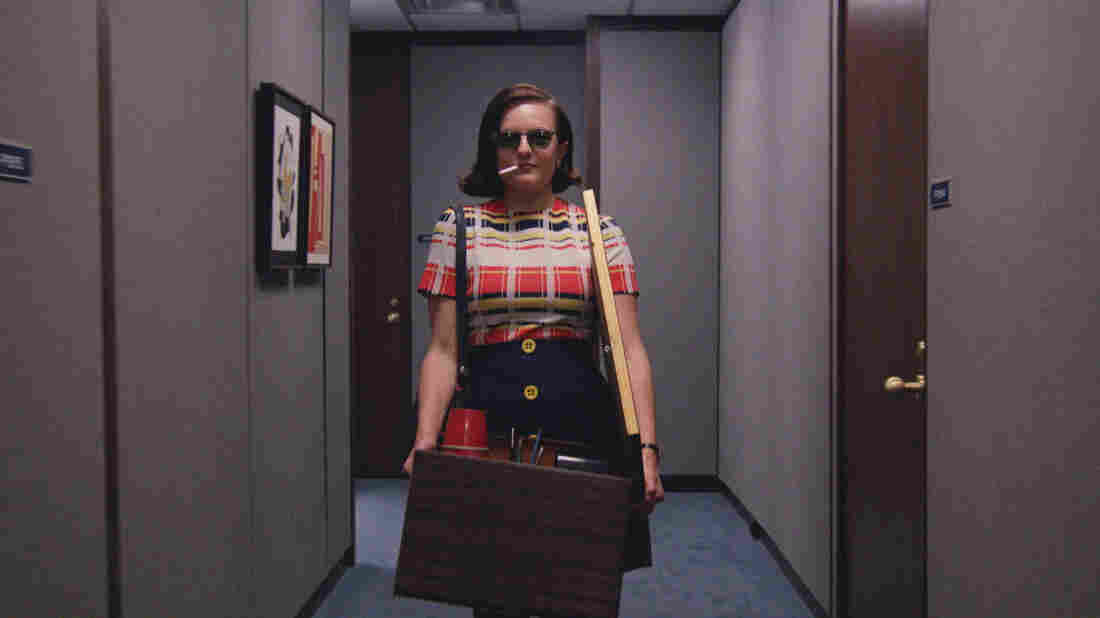 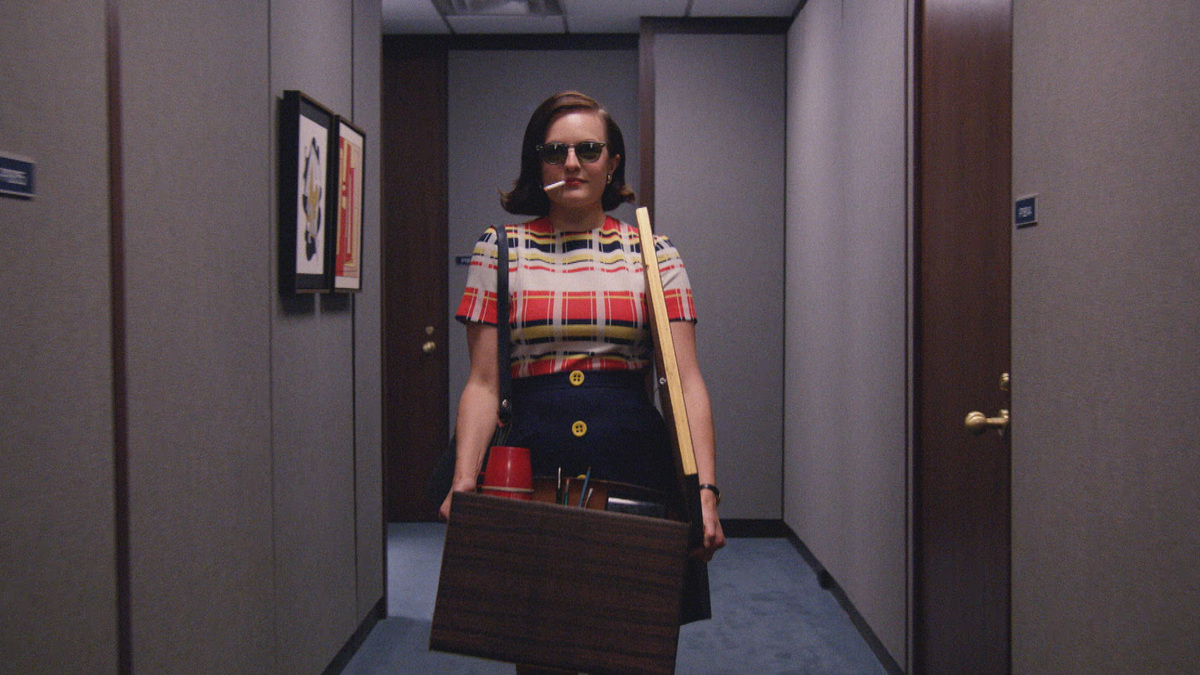 Sunday night's Mad Men was the antepenultimate episode of the series – a word we don't get to use enough, but one that can be surprisingly significant in television. The second to last episode is often (rightly or wrongly) understood and analyzed as finale table-setting, so this third to last episode is sometimes the last that feels like the regular show. And for Mad Men, it seemed to serve as a crystallizing hour for the themes that the show has returned to over and over, reaching no conclusions about those themes but turning them over and over in its narrative hands.

The show's main fascination, of course, is change: whether it's possible, what it does to people, and who pays the price for it. This episode is called "Lost Horizon," named after what's often spoken of as the first mass-market paperback book. That's entirely consistent with where social and personal change has been going all season: what is distinguished and highly valued by the people who have always had power is being forcibly democratized, made vulgar and accessible, made cheap and audacious.

"Lost Horizon" followed the former SCDP personnel as the company they built together was dismantled and they were absorbed, for however long they choose to stay, by McCann Erickson, the new owners who care not at all if most of them stay or go. Don pressed his hand against the glass windows of his new office – a tantalizing nut for those who have always believed the series would end with him becoming the window-jumper in the credits. (He also hungrily watched a plane – incidentally a tantalizing nut for a handful of particularly inventive viewers who have advanced the adorably bonkers theory that Don will become D.B. Cooper.) Miserable and lost in the new company among a sea of identical men with identical pens and robbed of his personal exceptionalism, he took off in search of Diana, the waitress with whom he was involved earlier this season. When he didn't find her in Racine, Wisconsin, he kept driving. Not back home, but farther west. (This exclamation point on the episode's ending may be lost on a certain number of coastal Mad Men viewers who have no idea where Wisconsin and Minnesota are relative to each other and don't realize Don is gone, baby, gone.)

For now, McCann Erickson boss Jim Hobart is without the one SCDP asset he seems to have valued: Don Draper. And Don Draper – who after all, is not Don Draper anyway – spent the episode playing with one of his favorite cerebral toys: the endless promise inherent in simply ceasing to exist. He didn't have to come up with the elaborate ruse he did to explain himself to Diana's ex-husband's new wife; he likes inventing a new back story on the fly. He likes thinking that perhaps an identity can be left behind like a suit and a new one carried like another man's business card.

That window, that plane: he already had one foot out the door. We never even saw the new apartment Meredith was decorating for him. He didn't even seem to care what it looked like, though he was amused by pointing at a photo, choosing décor by placing himself in a new home of his imagination. But did he ever intend to live there? His office is gone. His apartment is gone. What's left that he really would miss? Oh, right. He paused for a lovely little chat with Betty, to make sure she was okay and she could look after the kids. After all, as Betty reminded him, Sally is very independent now. He even wished her well. "Knock 'em dead, Birdie." And ... gone.

Meanwhile, Joan learned the perhaps unsurprising news that her painful decision to sleep with a client in return for a partnership didn't provide her with lasting protection against jerks, but only with opportunities to meet more of them, who got worse the higher up she went in the organization. She began with Dennis, the rude, sexist, leering clod assigned to work with her on her accounts. When he blew a client call and then whined that she wasn't "fun" the way he expected, she went up one level to Ferg Donnelly to ask for someone else to deal with. She was told that Ferg would help and protect her – if she slept with him, of course. And when she went over Ferg's head to Jim Hobart, he told her flat-out that her partnership didn't count, she didn't matter, she could count on worse treatment as time went on, and she was welcome to leave, with only half the money the company owed her, if she didn't want to hang around and be sexually harassed and humiliated. In a very real way, she was offered $250,000 to stay and be abused. Or, looked at another way, offered the opportunity to purchase her freedom for the same amount.

The final insult? Roger Sterling, whom she has loved and been disappointed by over and over, came to tell her to give up, take half her money, eat the loss, and leave. Christina Hendricks did beautiful work in that scene as Joan looked at Roger and saw all the years she'd lost to a job that — and a man who — ultimately gave her back nothing close to what she knew she deserved. So she walked. The system stayed, but at least this one woman left.

Joan is in a peculiarly brutal moment that arrives in lots of lives: the moment when the anesthesia of low expectations for your life has worn off and allowed in the pain of the unjust impediments to getting what you are finally prepared to admit you want. She now knows she settled for too little from Roger, from SCDP, from her life as part of the brain trust behind a successful advertising agency. She, who began the series by schooling Peggy in how things are, now can't stand how things are. She believed that by going along one last time to get her partnership, she'd be insulated from the effects of all of this, and now she knows there's no insulation thick enough to keep Dennis and Ferg and Hobart away. She learned that you can't build yourself a lifeboat and escape a sexist swamp all alone. Because you're still in a very little boat in a very big swamp.

Peggy, meanwhile, got what very might be the single greatest character shot in Mad Men's seven-season history: walking into McCann Erickson for the first time in dark sunglasses with a cigarette hanging out of her half-smiling mouth, a dirty painting under her arm, and no time for nonsense. We already know from Joan's discussion with Ferg, as well as from how long it took them to even get Peggy an office, that Peggy isn't going to be treated well at McCann either. They don't intend to give her the authority she had at SCDP. They don't intend to make men work for her the way men used to work for her. This isn't going to be what she wants – at least not at first. 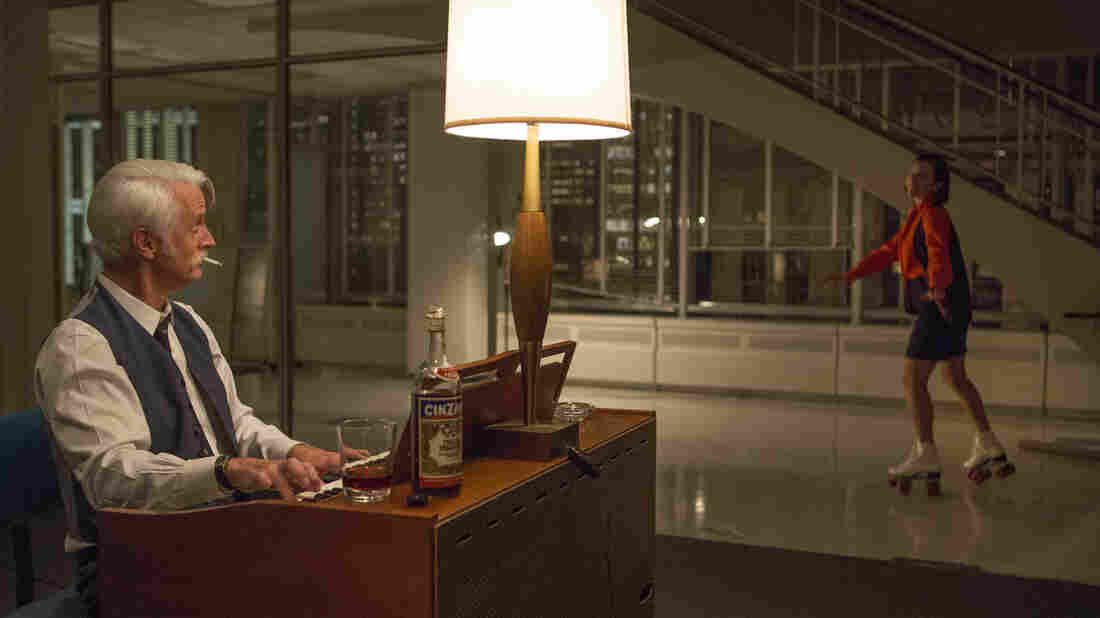 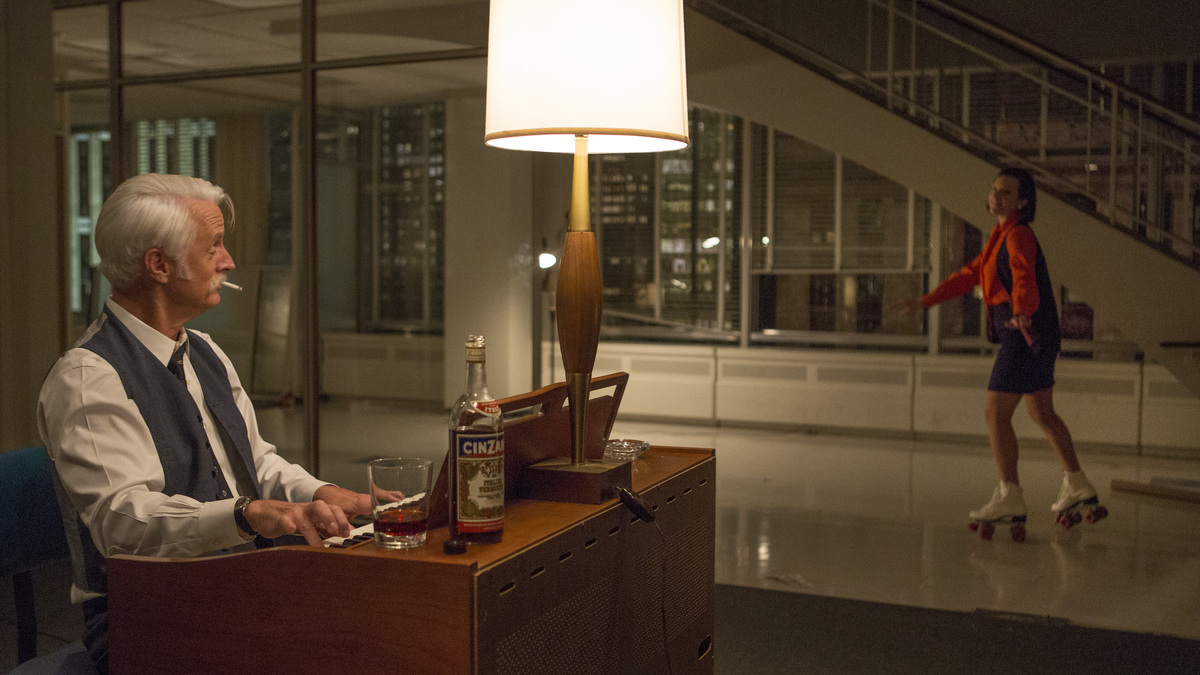 But Peggy had a great day. Peggy spent a day drinking and roller-skating while Roger played the organ (one of my favorite sequences either actor has ever done), and they talked more than they usually have, and it helped.

Perhaps part of the reason Peggy is feeling better than Joan despite knowing her prospects are dim is that she's never let herself accept the way things were, so she's been feeling this rock in her shoe forever. She feels it when she comes to work, when she goes home from work, when she talks to Don, and when she talks to Joan. She's been working in spite of it. Peggy always believed she could do more. She asked for more money. She even left for more money. She told Don Draper, of whom most of the office was afraid, how to treat her and how not to. When McCann told her to come and sit with the secretaries until she had an office, she said no: she understood the optics. She understands she has to hold out as long as possible, in absolutely every way she can, even though it probably won't work.

Nothing is good. Everything is terrible. What's not cheap and loud is old and rotting. But for whatever reason, other than a man who's literally fleeing into the west, Peggy Olson is the only one who feels all right.