Accessibility links
'Vorrh' Takes A Dizzying Trek Into The Dark Heart of Fantasy British artist Brian Catling's fiction debut, about a mysterious forest in an alternate-universe Africa, is finally in the U.S. Reviewer Jason Heller calls it an "eye-gouging, mind-bending spectacle." 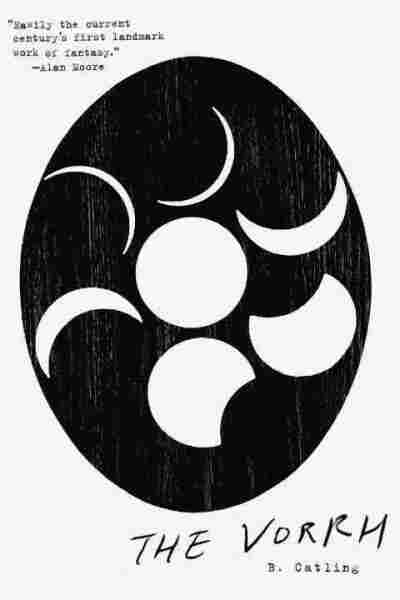 Title
The Vorrh
Author
B. Catling

Before Brian Catling's debut novel, The Vorrh, was published in his native England in 2012, he'd already racked up an impressive list of credentials — just not as a fiction writer. His poetry, sculpture, paintings and performance-art pieces have been getting international acclaim for decades.

Catling turned to The Vorrh at the urging of friend and fellow polymath Iain Sinclair, and his first foray into long-form fiction does not disappoint. Instead, it feels like the midcareer highpoint of an established novelist, full of lyrical subtlety, piercing clarity and an understated assurance. What it doesn't possess is restraint: The Vorrh — which is finally being published in the U.S. — is a sprawling, omnivorous novel that gobbles up history, geography, mythology and fantasy, then delicately chews it into a rarified pulp.

Like Jeff VanderMeer's recent Southern Reach Trilogy, The Vorrh takes place in a fictional area that exists within our world, nestled in a spot on the map that's never specifically identified. Catling's mysterious domain, which shares the name of his book, is a vast, uncharted forest somewhere in Africa — but other than that, the reader is left deliciously disoriented. Outside of the Vorrh sits another fictional place, the city of Essenwald, which was relocated from Europe, brick by brick, as a symbol of colonial dominance.

The era is post-World War I; the Vorrh sits on the cusp of antiquity and modernity. For reasons that aren't entirely clear, Peter Williams — an English veteran of the French trenches — ventures into the Vorrh alone. But he's not going unaided: His lover, a woman named Irrinipeste who belongs to a native tribe called the True People, has died, and Peter gruesomely fashions a bow out of her sinews and bones. The arrows he shoots from this bow guide him as he treks deeper into the forest that no one has ever reached the heart of — at least no one who has ever lived to tell the tale.

Catling's plot and prose, like his setting, are dreamlike and hyper-vivid. His frequent and liquid shifts in point-of-view only add to that kaleidoscopic vision, and his surrealistic style dovetails empathetically with the source of his inspiration: The real-life surrealist writer Raymond Roussel, whose 1910 novel Impressions of Africa briefly mentions a forest called the Vorrh. In this sense, The Vorrh is not only a work of alternative history, but of alternate literature; Catling builds his imaginary story of the conception of Impressions of Africa into his Joseph Conrad-esque voyage into the unknown. He also intricately weaves in half-true, half-invented lives of historical figures such as pioneering photographer Eadweard Muybridge and Sir William Withey Gull, the physician to Queen Victoria (and suspected Jack the Ripper). Roussel becomes a central character, rendering The Vorrh a tangled, dizzying dialogue with the work that inspired it.

There are a staggering number of elements to juggle, and Catling practically levitates them. As Peter's journey becomes stranger, so does The Vorrh's voluminous cast. Ishmael is a Cyclops — literally, a man with one large eye in the center of his forehead — who seeks to track down Peter in the Vorrh and therefore further his own quest to discover his origins, as abominable as he fears they may be. In Catling's world, a miraculous healing touch becomes a plague of unchecked beneficence, where primitive tribes of cannibals do not adhere to the racist stereotypes of the time, and where angels must bury themselves under the soil in order to sleep. None of these wonders is there for show; they each play a part, sometimes pivotal and sometimes peripheral, in the teeming conceptual ecosystem of The Vorrh.

For all its eye-gouging, mind-bending spectacle, The Vorrh makes room for hushed poignancy and philosophical heft. Ishmael is a man-monster as compelling as Frankenstein's, and the nature of perception, time and the ghosts we both battle and become are tenderly explored. "They say that the forest lives on in memory, and that it devours the memory of men," Ishmael says to Peter, who has long ago forgotten how long he has been in the Vorrh, or even why he's there. It's a testament to Catling's skill as a sculptor of words that such otherworldly ideas and images not only connect, but resonate to the bone.

Read an excerpt of The Vorrh