Accessibility links
'The Argonauts' Is A Voyage Through Parenting, Partnership And Transition Maggie Nelson's philosophical memoir uses her pregnancy — and her partner Harry's gender transition — to explore larger questions about the changing ways we approach marriage and motherhood. 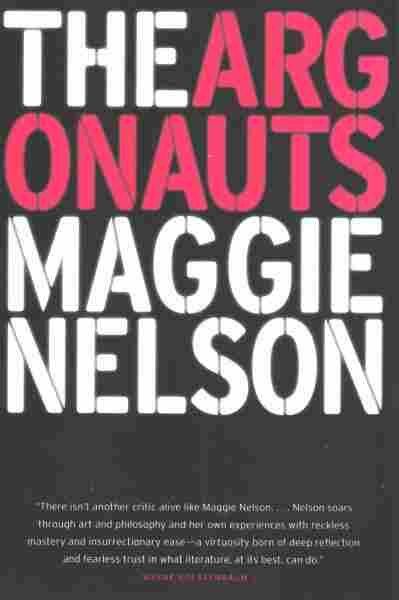 Maggie Nelson's The Argonauts is, on one level, a memoir about Nelson's pregnancy with her first child, Iggy, and her partner Harry's concurrent female-to-male "transition." (The quotation marks are borrowed from Nelson, who at one point wonders "how to explain ... that for some, 'transitioning' may mean leaving one gender entirely behind, while for others — like Harry, who is happy to identify as a butch on T [testosterone] — it doesn't?")

But that doesn't quite capture The Argonauts' whirlwind character. Nelson's vibrant, probing and, most of all, outstanding book is also a philosophical look at motherhood, transitioning, partnership, parenting and family — an examination of the restrictive way we've approached these terms in the past and the ongoing struggle to arrive at more inclusive and expansive definitions for them.

The two components rub against each other. In some senses, The Argonauts captures Nelson and Harry at their most rigidly gendered — Nelson pregnant after years of "deriding 'the breeders'" and Harry achieving the body he long envisioned for himself after going through testosterone therapy and surgery. But the reality is much more fluid. "On the surface, it may have seemed as though your body was becoming more and more 'male,' mine more and more 'female,'" Nelson writes. "But that's not how it felt on the inside. On the inside, we were two human animals undergoing transformations beside each other, bearing each other loose witness. In other words, we were aging."

Nelson's embrace of fluctuation, of loose identity, of continual metamorphosis, runs through the book. It's apparent even in the book's title, which refers to the sailors of the mythical ship the Argo, cited by Roland Barthes as the subject of Theseus' paradox: The ship that is rebuilt entirely from new parts but nevertheless keeps its original name.

But her enthusiasm is mingled with uncertainty and self-doubt. While her family isn't traditional, her life in some ways is. She's married (she and Harry tie the knot hours before Proposition 8 briefly becomes law in California), has a son and a stepson, and partakes, along with her mother, in family rituals like going to see The Nutcracker at Christmas.

So when Nelson writes about "the anxiety and despair so many queers feel about the failure or incapacity of queerness to bring down civilization and its institutions, and their frustration with the assimilationist, unthinkingly neoliberal bent of the mainstream GLBTQ+ movement, which has spent fine coin begging entrance into two historically repressive structures: marriage and the military," she's writing both at and about herself. Are we drawn to these institutions, she asks, to what might be deemed a more conformist life, because with time we truly desire them? Or does the dominant culture just finally catch up with us?

The Argonauts explores this theme — and many others — in a swirling, daring structure filled with quotes from philosophers like Judith Butler, Eve Sedgwick and Gilles Deleuze. Nelson integrates these bursts of argument and counterargument into her personal writing by attributing the author on the margins, thus putting theory on the same plane as her own more personal content. The impulse to reveal and the need to analyze elevate each other through their friction. "I'm just trying to let it hang out," Nelson writes at one point, but she also recalls times with Harry when self-revelation led to confusion: "As is so often the case, the intensity of our need to be understood distorted our positions, backed us further into the cage."

Nelson's writing dances to avoid the cage. There are more questions broached here than conclusions offered ("the aim is not to answer questions, it's to get out, to get out of it," Nelson quotes Deleuze). The instability gives the book life because it reflects a way of life. Nelson has no tolerance for restrictions, or shame in relation to her life decisions or anyone else's. "Any bodily experience can be made new and strange," she writes. "Nothing we do in this life need have a lid crammed on it ... no one set of practices or relations has the monopoly on the so-called radical, or the so-called normative."

The beauty of that limitless possibility is movingly illustrated when Nelson finds out she's going to have a baby boy. She's disappointed at first — she had "the fantasy of a feminist daughter ... a femme ally" — but quickly has a change of heart. "I was on board ... I would love him fiercely," she writes, and then recalls a reminder Harry offered: "Hey, I was born female, and look how that turned out."

Tomas Hachard is a Toronto-based writer whose work has appeared in The Guardian, The Globe and Mail, and Slate.