Accessibility links
Not My Job: Actor Steve Buscemi Gets Quizzed On Government Jobs Buscemi wasn't always a famous actor. He was once just a young man taking the civil service test. If things had gone differently, he could have had a career in any number of exciting government jobs. 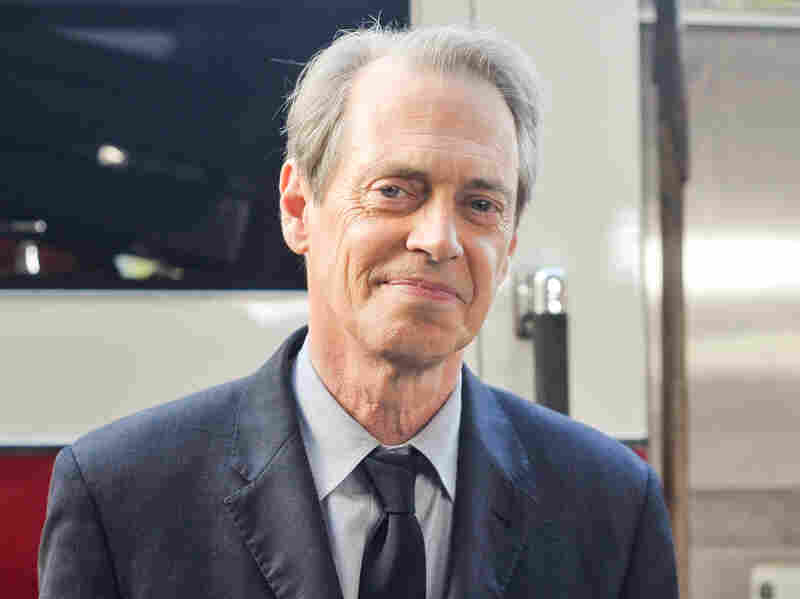 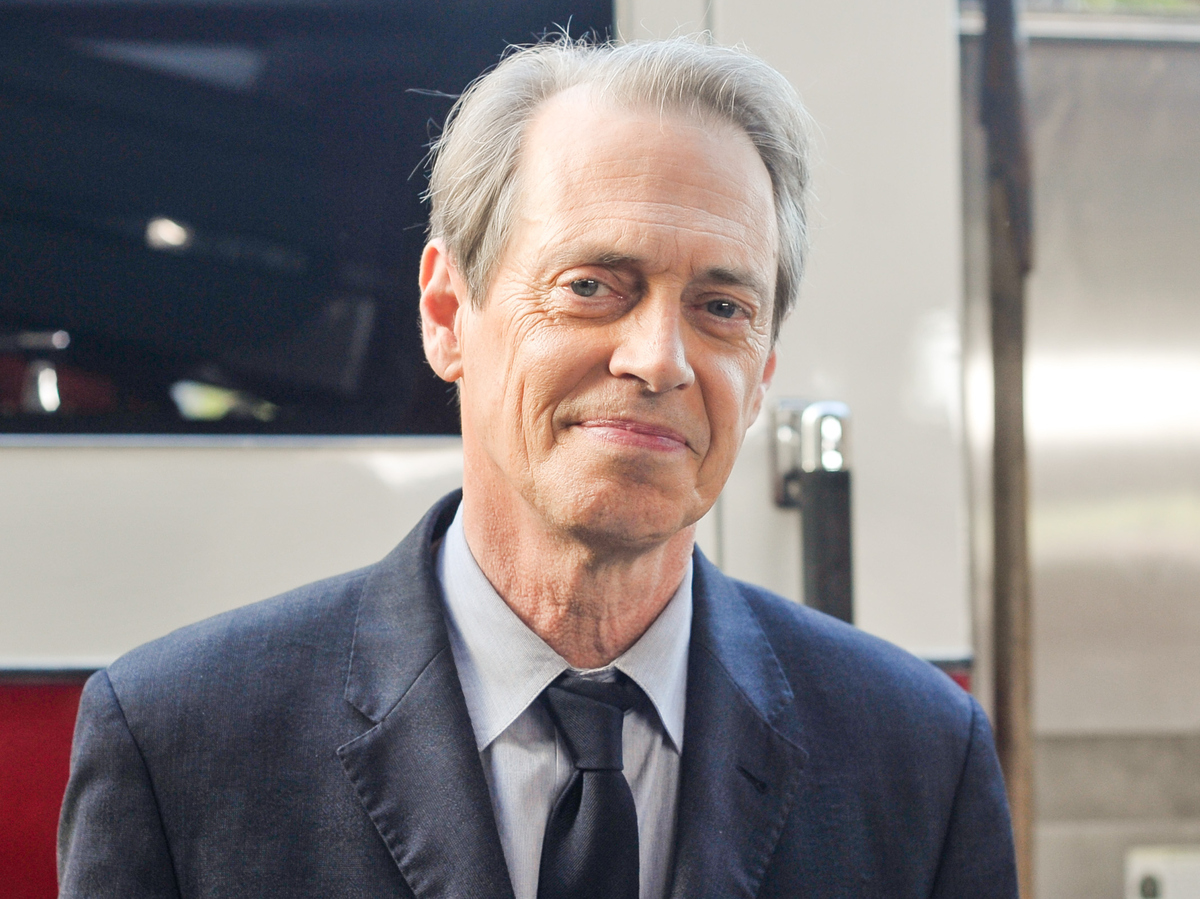 Steve Buscemi has become one of the most beloved, busy and recognizable actors of our time, with starring roles in classics like Reservoir Dogs and Fargo. He just finished a five-year run as the sentimental gangster boss of Atlantic City on HBO's Boardwalk Empire.

We've invited Buscemi to play a game called "Complete Form B46-A and get back in line."

Steve Buscemi wasn't always Steve Buschemi, famous actor. He was once just a young man taking the civil service test. If things had gone a different way, he could have had a career in any number of exciting government jobs. We'll ask him three questions about the civil service.

And now the game where we ask local heroes about things people just don't talk about around here. It's called Not My Job. So Steve Buscemi was born here in Brooklyn and grew up in nearby Valley Stream, just a few miles away.

SAGAL: Where amazingly, he was a jock. But he's become one of the most beloved, busy and recognizable actors of our time with starring roles in the classics, "Reservoir Dogs" and "Fargo," and he just finished a five-year run as the sentimental gangster boss of Atlantic City on HBO's "Boardwalk Empire." Steve Buscemi, welcome to WAIT WAIT ...DON'T TELL ME.

STEVE BUSCEMI: Thank you so much. Nice to be here.

SAGAL: It's really fun to have you.

SAGAL: You - so Steve, as I mentioned, back in high school you were an athlete, right? Yeah, I was on the wrestling team. I played soccer and a little bit of track. And I had a pretty mean reverse cradle.

MIKE BIRBIGLIA: Is that a track term or a wrestling term?

BUSCEMI: It's a wrestling term.

SAGAL: Yeah, you sort of hold them and put their head on the ground.

BUSCEMI: You get his head in a head lock and a leg and you grip your hands together and...

SAGAL: Can you still do that?

SAGAL: And - but at a certain point you decided to try to get into show business and perform. You were a stand-up, right?

BUSCEMI: Yes. I tried doing stand-up. I actually - I don't know how but I passed the auditions at The Improv in like 1978. And I would hang out there. But I would never get on. I would just be there like late at night and watch all the - like Jerry Seinfeld and Gilbert Gottfried and all these guys perform. And then one night they did not have anybody there to go on. And it was still like early in the evening. And the manager, you know, came over and he looked at me and he said, all right, you. You're up.

SAGAL: It's your moment.

BUSCEMI: It's my moment.

SAGAL: It's going to happen.

BUSCEMI: And I was just about to go up and then Paul Reiser came walking in.

BUSCEMI: Thank God Paul's here. And they put Paul up.

PETER GROSZ: I think "Mad About You" would've been a lot better if you were on it.

BUSCEMI: Well, I actually - but I actually, I did guest star on "Mad About You" where I played the disgruntled subway token guy who went to film school with Paul Reiser. And I got to yell at him in the scene.

SAGAL: Did Paul know this?

BUSCEMI: No. I don't think he would have cast me if he knew that I really like held...

BUSCEMI: And then I told him the story and he went, wow, you really do hate me.

SAGAL: Is - I'm dying to know what was your comedy like?

BUSCEMI: Oh, this is why I quit.

BUSCEMI: It was - I don't want to talk about it.

SAGAL: I've been thinking about about all the roles I've seen you in, and you have had some of the most memorable deaths I've seen.

BUSCEMI: I've had a lot of deaths.

SAGAL: You've done a lot of deaths. You died in - I'm sorry for the spoilers - "The Big Lebowski." Probably your best death - would everybody agree - "Fargo," into the wood chipper?

BUSCEMI: No, I don't know where they got that leg.

BUSCEMI: I was a little upset. That looks nothing like my leg.

SAGAL: Mister Coen, can I have a moment with you please? Look.

BUSCEMI: But people, you know, sometimes stop me and say that that's their favorite scene of mine in "Fargo."

SAGAL: You were so convincing as a disembodied leg and a spurt of blood.

GROSZ: You look great now. I mean, you look fantastic.

SAGAL: Perhaps your saddest death, at least for me as a fan, was in "The Sopranos."

SAGAL: Where Tony himself shotguns you.

SAGAL: I was sad to see you go.

BUSCEMI: And I remember I called my mother. You know, we're not supposed to say what's happening on - you know, David chase had a very strict rule. But that afternoon, I called my mother to tell her that I was going to die that night on "The Sopranos" because like, she's seen me die so many times.

BUSCEMI: So I wanted to prepare her. And I said, mom, just so you know, I'm going to get it tonight. And she says, but who kills you? I said, Tony. She says, oh, Steven...

BUSCEMI: ...He's your cousin. I said, I know, but I've done bad thing. My character - you know, and he's, you know. So that night after the show, I called her to see if she was OK. And this is only, you know, can come from a mother. She said, oh, you looked so handsome - after I was shot.

BUSCEMI: After - yeah. Laying there on the porch, the way you looked, you looked so handsome, so peaceful.

SAGAL: Steve Buscemi, what a pleasure to talk to you. But we've asked you here to play a game we're calling...

BILL KURTIS, BYLINE: Complete Form B46-A And Get Back In Line.

SAGAL: Now as we were discussing, you were not always Steve Buscemi, famous actor. In fact, we once read that when you were a young man, your father had you take the Civil Service Exam. So we're going to ask you three questions about the civil service. Get two right, you'll win Carl's voice on the voicemail of one of our listeners. Bill, who is Steve Buscemi playing for?

SAGAL: All right. Here we go.

SAGAL: First question. Now we're all familiar with the postal worker, the proud civil servant in charge of delivering our mail. But along through the long history of the Postal Service, they have occasionally faced competition such as which of these? A, Mailcats, domestic cats outfitted with mail patches; B, The Tony Express of 1930 Staten Island, where a group of guys named Tony delivered mail anywhere you wanted in the Borough; or C - and this is just late last year - based on the notion's popularity on the podcast Serial, Ira Glass tried to introduce real life Mail Kimps.

BUSCEMI: How could any of those be real?

BUSCEMI: I don't know why but I'm going to go with The Tony Express.

SAGAL: I love the Tony Express.

SAGAL: It's true. In the 1870s, the Belgian Society for the Elevation of the Domestic Cat tested out male cats rigged up like carrier pigeons with messages tied to their collars. But the problem is that unlike carrier pigeons, cats go wherever the hell they want, so...

BUSCEMI: I know. Why a cat?

KLEIN: It's the worst one.

SAGAL: All right. You still have two more chances. The DMV may be the most hated part of the civil service, but we're here to tell you there's a reason for that. As in which of these - A - one of these really happened. A DMV official in Cleveland was disciplined for trying out his five-minute comedy routine on each customer because he was, quote, "trying to get them to smile for their license picture"; B, a man who moved from New Mexico to Connecticut was told he couldn't have a Connecticut license 'cause this, quote, "this branch doesn't handle foreign transactions"; or C, a DMV official in Reno would prank people taking the driving test by throwing a baby doll under a tire and screaming.

BUSCEMI: You see now, all of those sound like they could've really happened.

SAGAL: You're actually right. We made this too hard.

The first one was the five-minute comedy routine for the people getting their licenses. So he sits them down, he says, a funny thing happened to me on the way to the DMV. You ever been to the DMV? It's crazy. No. That one, or a guy goes from New Mexico, tried to get a new license in Connecticut. They said we can't handle foreign transactions. Or a DMV official in Reno would give people the driving test and then throw a baby - doll, doll - under the tire and go ah. You killed the baby.

BUSCEMI: It's not that one. It's not the third one. The second one does really sound plausible.

SAGAL: They like it. They've been to the DMV.

BUSCEMI: I'm so tempted to go with the first one. And I'm probably wrong but I'm going to go with A.

BUSCEMI: Did I say A?

SAGAL: You said A.

SAGAL: It was the guy in Connecticut...

SAGAL: The guy says look, just call New Mexico and you'll straighten this out. And the guy says I can't. We're not allowed to make international calls here - Connecticut DMV.

All right, so this one is for all the marbles. Perhaps the branch of the civil service that people complain about the most is the TSA. In one recent case, our worst nightmares were confirmed when two agents in Denver were fired for doing what? A, to save time, they just pasted one of those men's room stick figures of a man on their screen so they wouldn't have to check anybody; B, they ran a business in the airport parking lot selling bottles of water, wine and gourmet jam taken from passengers; or C, they set the machine to alarm whenever an attractive person went through so they could check them by hand?

SAGAL: It was sort of brilliant, but creepy. The trick was whenever the scout saw an attractive guy through, she would alert her partner to set the machine to female, so then the machine would detect a kind of anomaly in the groin area. And then - oh, you have to be checked by hand. They've been fired, so worry not.

Bill, how did Steve Buscemi do?

KURTIS: Two out of three. That's a win.

SAGAL: Steve Buscemi's Emmy-nominated AOL web serious, "Park Bench" with Steve Buscemi is coming back for a second season. Steve Buscemi, thank you so much for joining us. What a pleasure.