Accessibility links
After Campus Suicides, Building Community With A Simple Statement After two of her classmates took their lives, MIT freshman Isabel "Izzy" Lloyd made wristbands to promote compassionate outreach on campus. The white bands say TMAYD, for Tell Me About Your Day. 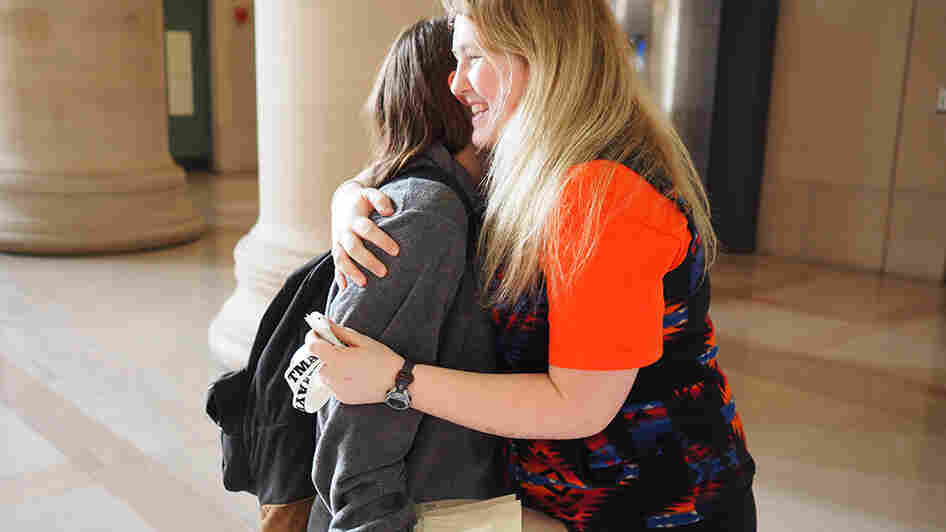 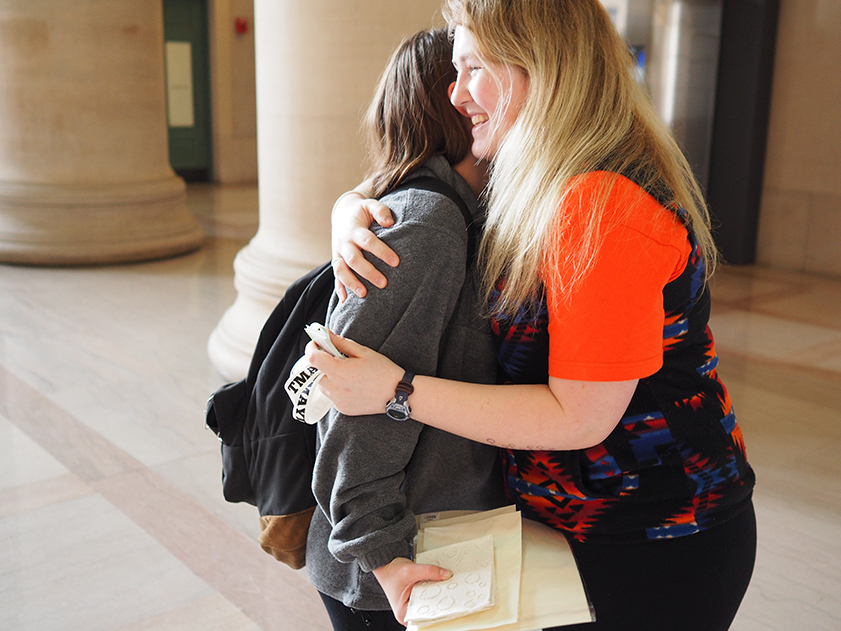 TMAYD founder Izzy Lloyd (right) gives a friend a hug after asking about her day.

In the past academic year, four students at the Massachusetts Institute of Technology have taken their own lives.

And in the days that followed two of her freshmen classmates' deaths by suicide, 18-year-old Isabel "Izzy" Lloyd noticed something.

"Things just sort of stopped for a week or two and there were people posting on Facebook and sending out emails and Twitter and Instagram and people were saying, 'I care, you can come see me,' " she says.

"And what I noticed during all of that is that we should be reaching out and telling people that we care before tragedy strikes."

Lloyd wanted to create a symbol, a visible reminder of that spirit of compassion and care. She decided to make wristbands — 1-inch-thick white silicon wristbands with TMAYD MIT written on them in black letters.

TMAYD stands for Tell Me About Your Day.

She says that simple phrase can open up interactions with anybody.

"It's a good way to check in and it spans all different kinds of conversations — bad, good, embarrassing, something you've accomplished, something you hope to accomplish." 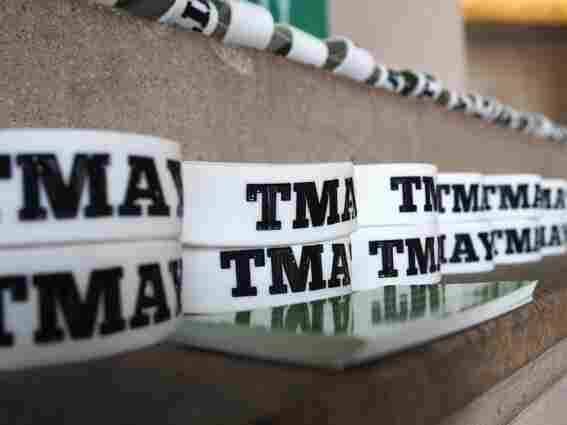 The class of 2019 will get these hard-to-miss symbols of support when they arrive on campus. Maia Weinstock/MIT hide caption 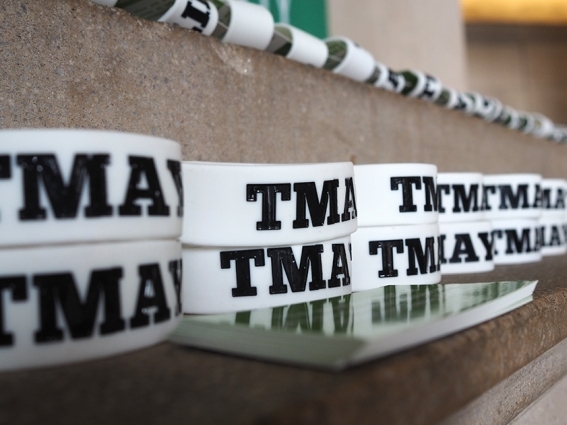 The class of 2019 will get these hard-to-miss symbols of support when they arrive on campus.

She used her own money to have 200 wristbands made and started handing them out in March.

"When I was first giving them out I was standing in Lobby 7 at MIT, which is like this main artery of campus. And a lot of people were confused by TMAYD but that was kind of the point. I wanted them to wonder," she says.

The curiosity factor worked and by the next day she had hundreds of requests. She got a grant from the Student Activities Office to make more.

Now, 2,500 TMAYD wristbands are floating around the campus, which has around 4,500 undergrads.

Lloyd says she recently saw four or five dancers at a dance troupe show wearing the wristbands. "[It] was not part of their costume and so they still wore it and it was very visible. So that was the goal — is to be able to look at somebody and be like, 'OK, that person cares about me.' "

She says the bands she created have even been a good reminder for her.

"I look at it and I think, 'OK I'm gonna stop what I'm doing now and go talk to that girl over there sitting alone, I haven't talked to her in a while,' " Lloyd says. "And I hope that other people do that ... A lot of my friends have told me that people they haven't talked to in months have come up to them and asked them how their days are."

Upperclassmen and grad students are donning the wristbands. And some faculty are displaying the bands around their classrooms.

In the fall, there will be wristbands waiting for the class of 2019.

"It's gonna be a really good time being able to sort of hand the wristbands to them and give them a physical object that says, 'We care about you and you're welcome here,' " Lloyd says.

She hopes the message spreads off of the MIT campus and even beyond the college realm.

"I think ... someday this could be a national acronym that people see, and I would love that," she says.