Accessibility links
A Visceral, Inventive Blockbuster Roars To Life In 'Mad Max: Fury Road' More than 35 years after the release of the original Mad Max, a new chapter emerges, starring Charlize Theron in what Chris Klimek calls a doomsday reinvention like nothing since The Matrix. 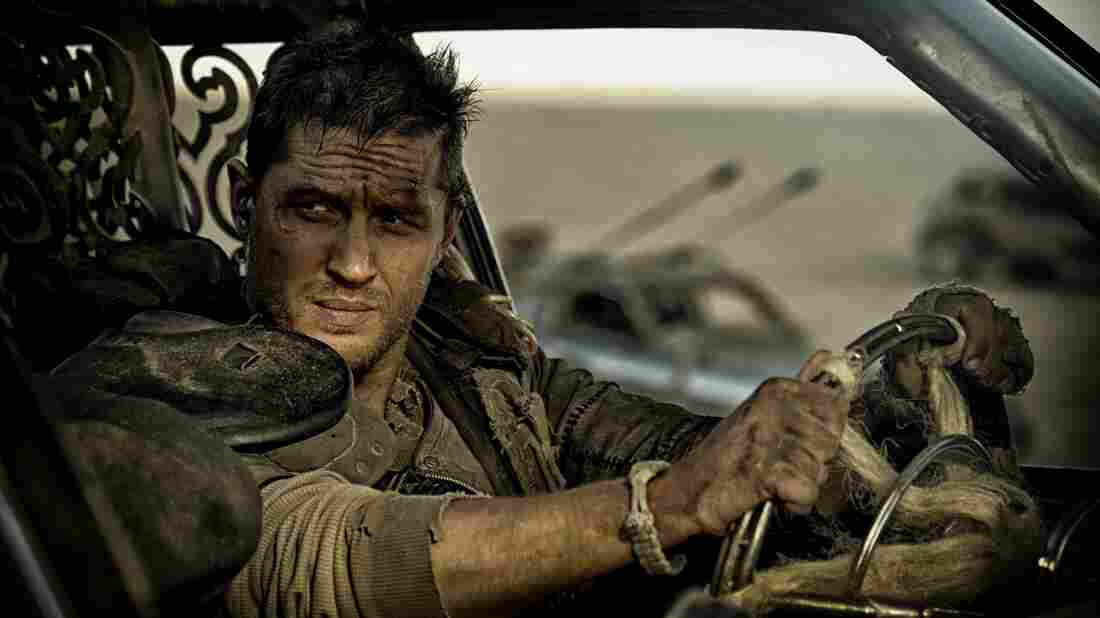 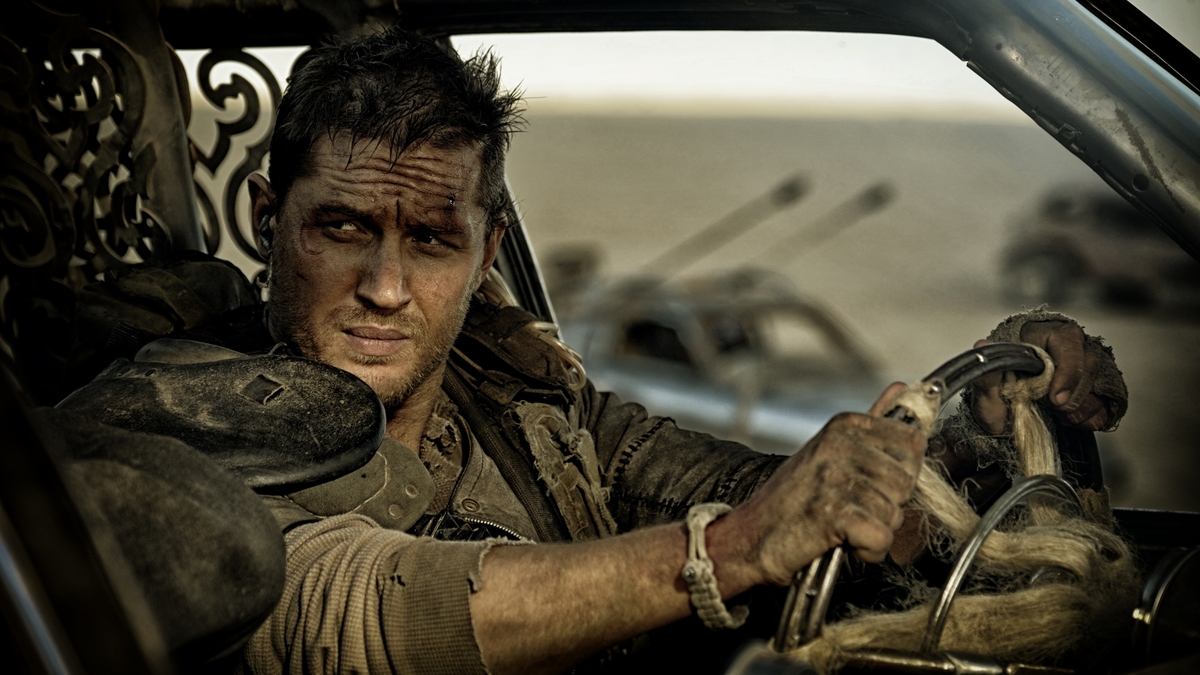 What's the half-life of a post-apocalyptic action film franchise? Potential ticket-buyers born the day the most recent Mad Max movie was released — summer 1985, one weekend after Back to the Future -- could be on their second marriages by now. The original Mad Max, from 1979, cost less than $1 million in 2015 money. Though an international hit, today it plays more like a scrappy curiosity than a great action picture, notable for introducing the world to 23-year-old Mel Gibson, whose personal dystopian hellscape was still decades off. Its sequel, released in these United States as The Road Warrior, is the original trio's only essential entry.

But even that lo-fi, high-impact classic now looks like a mere sketch for the long-under-construction Mad Max: Fury Road, a kinetic, hallucinatory, boldly feminist chase flick that, with its vibrant color palette, harrowing stunt work and show-don't-tell style of yarn-spinning, leaves every Marvel movie and every Fast & Furious in its irradiated dust. It's the most visceral blockbuster since Gravity, and it reinvigorates the doomsday genre like no film since The Matrix. Director George Miller, plucked-from-retirement cinematographer John Seale, and editors Jason Ballantine and Margaret Sixel render its overwhelmingly analog derring-do in a balletic and fluid legato, rather than the thudding staccato of a younger, more loudmouthed car-chase franchise that lives its life a quarter mile at a time (and never, ever shuts up about it). If Fury Road has a moral, it's the same one screenwriting professors have been reiterating since chase movies starred Steve McQueen: Action is character. Words? They're just talk.

Tom Hardy, replacing Gibson as Max with as little explanation as when James Bond swaps faces, is nearly as tight-lipped in the role as Gibson was. (Miller co-wrote the script with Nick Lathouris and veteran British comics artist Brendan McCarthy, who also contributed to eye-popping design work.) When he does speak, he sounds as if he's just snuck up on Vin Diesel during one of his slurry monologues and swallowed him whole. Mercifully brief narration – from Max himself this time, a change the earlier movies – sets the table: He was a cop, in the last days of civilization. After motorbike-riding droogs ran down his wife and child, he wandered into the desert. Now he's driven only to survive, so he says, but here he is again, defending the vulnerable against the cruel for a third time.

Make that co-defending. Charlize Theron shares a movie-opening title card with Hardy and pulls a Linda Hamilton-in-Terminator 2, elbowing the title character out of the way to become the film's true protagonist. She plays Imperator Furiosa, a one-armed "war rig" jockey who paints her face with engine grease before going into battle on behalf of the water-hoarding warlord Immortan Joe. The McGuffins in his installment are, like Soylent Green, people: Specifically, Joe's five jealously guarded slave "wives," one of whom is carrying his child. Save for Joe's son, they're the only humans in the movie not visibly afflicted by cancer or gout or pallor or a missing limb. Except for Max, of course – and he's crazier than Don Quixote. (He sees dead people now, and it's starting to degrade his combat effectiveness.)

Anyway, Furiosa goes rogue to help these women escape. Wonder of wonders, we're not subjected to a cinemas-interruptus monologue where she tells us why. We get why. Theron's eyes show us why. Max eventually becomes her ally through happenstance, not heroism: He was a Immortan Joe's captive, too, kept alive for use as a "blood bag" for Joe's chalk-skinned "warboys." In one scene, he takes a few errant shots with a rifle before handing it, along with the movie, over to Furiosa. Her aim proves true.

Miller invited Vagina Monologues playwright Eve Ensler to the set in Namibia to help the cast try to understand the perspective of victims of sexual violence in war zones. A tall order for a summer popcorn flick, putting it mildly, not to mention for a film that, for all its brutality, sustains a lighter tone than most superhero films of recent vintage. (The sight gags are straight out of a Road Runner cartoon.) But it's all of a piece. The feminist and ecological payload of the movie is so inseparable from its simple narrative of flight and pursuit that it never feels didactic. It feels, well, visionary.

That's also true of the keenly observed anthropological details of the sunny hellscape Miller & Co. have created: It's a yellow desert with a liquid blue sky, wherein sickly warboys spray chrome on their faces in the hope of proving themselves "shiny" in battle. An elderly woman carries various seeds on her back her through the wastes in the slender hope of replanting the world.

There are a handful of callbacks to the earlier movies – including a running gag about the unreliability of old shotgun shells – but they don't call undue attention to themselves. In a pleasing bit of symmetry, the corrupt, red-eyed Immortan Joe is played by Hugh Keays-Byrne, the same actor who appeared as Toecutter, leader of the gang of art-school sadists who killed Max's family in the 1979 original. Nicholas Hoult gives a terrific performance as Nux, a tumor-pocked child soldier who becomes, briefly, a real boy. And Theron deserves another Oscar.

And let's also have one for Miller, who's been trying to get this movie made for at least 15 years. After delays ranging from September 11th to the Iraq War to original star Gibson's public dissolution to unexpected rainfall in Australia, he finally began shooting... in 2012, which was a while ago. George Lucas, James Cameron, and Peter Jackson all returned to this sort of epic fantasy/sci-fi after long sabbaticals, and all of them seemed to have lost, to greater or lesser degrees, the storytelling instincts that had served them so faithfully as younger, hungrier artists. Not so with Miller, whose three-decade second act as a maker of family-friendly films (two installments in the porcine Babe franchise, plus two penguine Happy Feet) has only made him a bolder and more energetic maestro of vehicular Thunderdome.

Now, he's willed into existence a $150 million tentpole that doesn't condescend and feels like the coherent statement of a singular artist. If he can pull that off, how about an Imperator Furiosa action figure?