Accessibility links
Interview: David Letterman No one has been a late-night TV host longer than David Letterman, who retires Wednesday after 33 years. Here's what he told TV Critic Eric Deggans about leaving the Ed Sullivan Theater one last time. 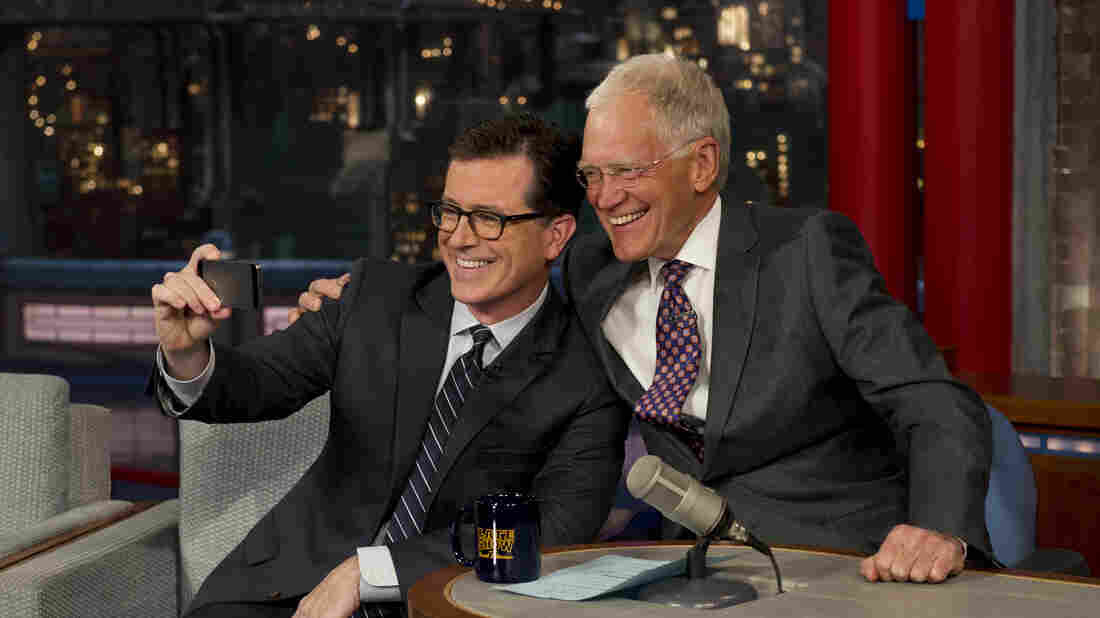 David Letterman, seen here snapping a selfie with his replacement Stephen Colbert, will step down next week as host of the Late Show. Getty Images hide caption 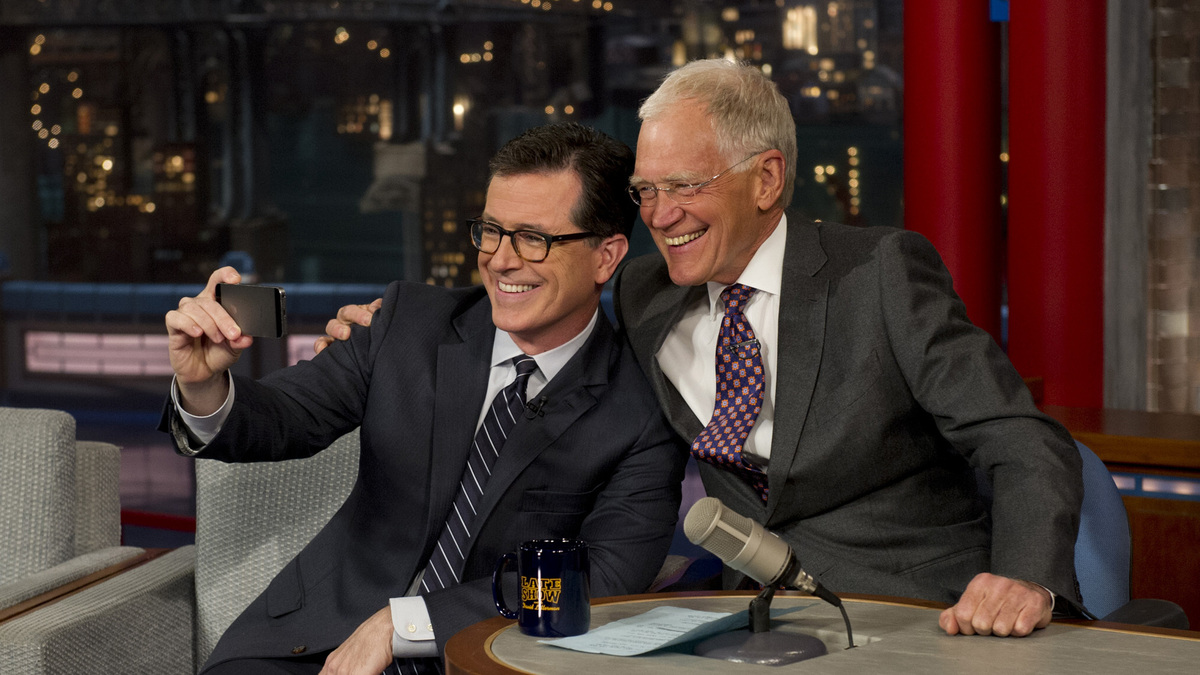 David Letterman, seen here snapping a selfie with his replacement Stephen Colbert, will step down next week as host of the Late Show.

What I first noticed about David Letterman was how quickly he ditched the suit.

During a taping of the Late Show on Monday at the Ed Sullivan Theater in Manhattan, he put off donning his suit jacket as long as possible, greeting the crowd in just a shirt and tie for a pre-show Q & A session before shrugging on the coat just as recording began.

Minutes after the show ended — the big highlight was seeing shock jock Howard Stern try to kiss Letterman on the lips — the host was completely out of his monkey suit. Clad in a long-sleeve shirt, khaki pants and hiking boots, he looked nothing like the big shot broadcasting legend who had held court with Don Rickles and Stern just moments earlier.

And perhaps that was the point. Because as Letterman answered questions posed by NPR about his impending departure, it was obvious he had settled into the idea that his historic run was finally coming to an end and his life was entering a new chapter.

"Up until this weekend I was feeling ... everything you might feel. Nervous. Uncomfortable. Out-of-sorts concern. And now I kinda feel like ... it is over now. I feel like these — these next two or three days are just cleanin' up paperwork. And, y'know, we're done." 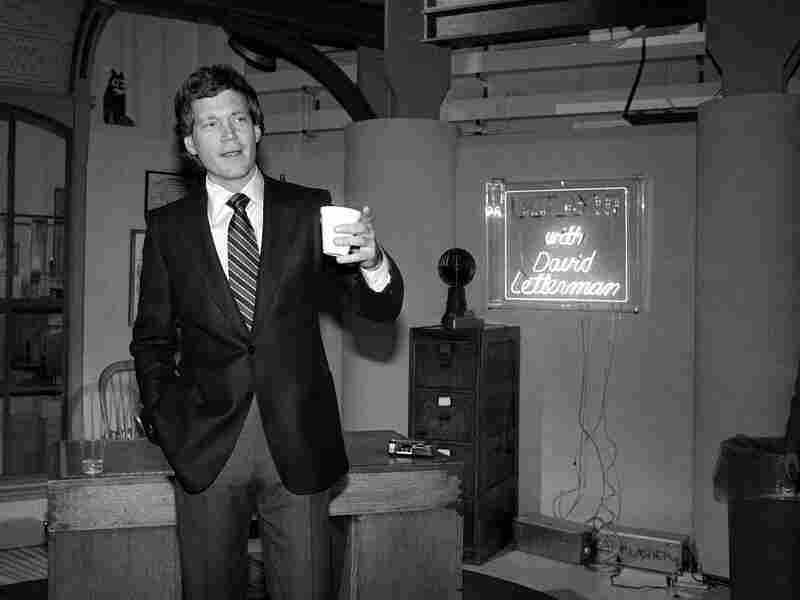 A young Letterman in NBC's Studio 6A in January of 1982, at a reception marking the launch of the new Late Night with David Letterman. He moved to CBS' Late Show in 1993. Perez/AP hide caption 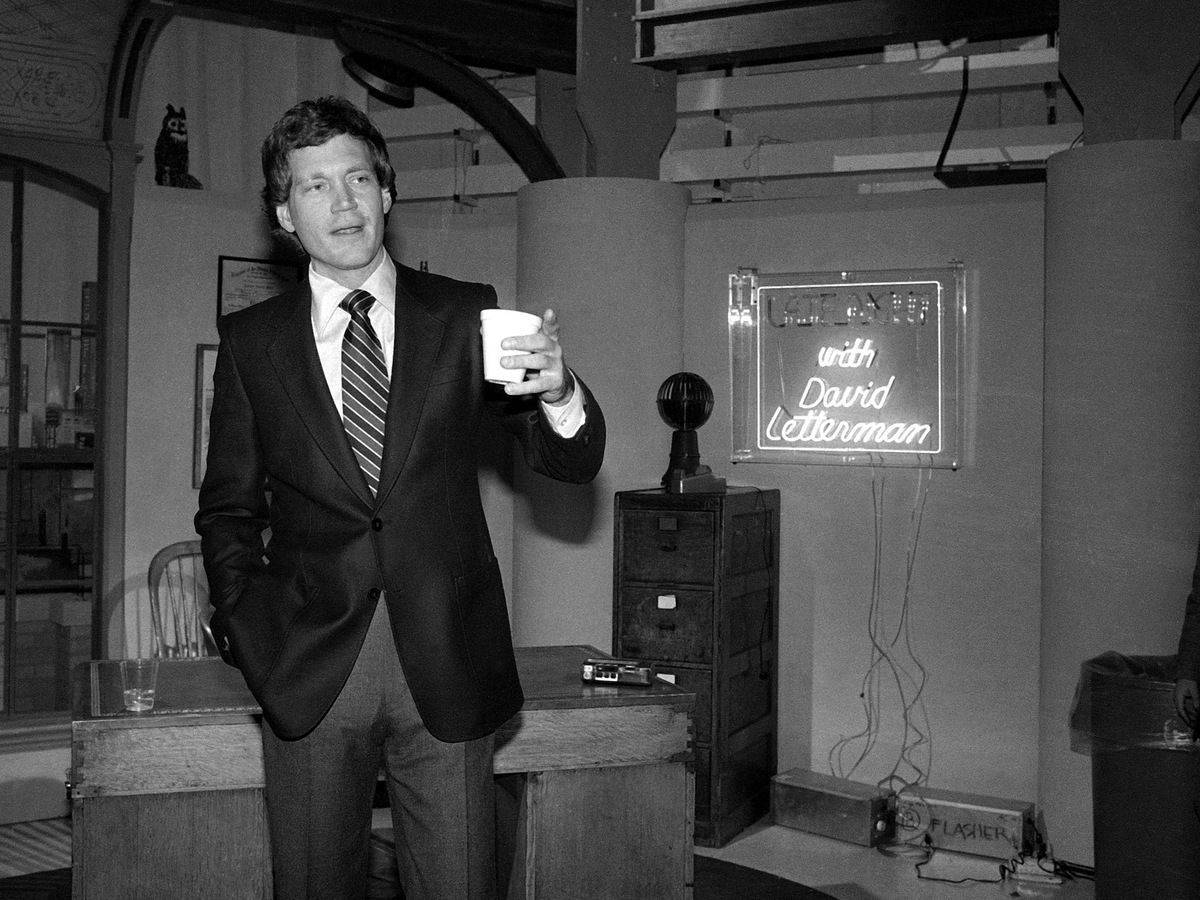 A young Letterman in NBC's Studio 6A in January of 1982, at a reception marking the launch of the new Late Night with David Letterman. He moved to CBS' Late Show in 1993.

On how Steve Allen influenced him

And then, they would occasionally run across the street to the farmer's market. ... And they would start the — they'd start in the produce section and start throwing fruit back and forth. And it was just like, how can you do this?!

On his first show after Sept. 11

I knew how I felt. I wasn't in the city when it happened. I remember flying back to the city ... my wife and I are coming back and, and we could see — this is like four days after the attack — we could see as, when we were landing, we could see these plumes of smoke rising. Y'know, everyone has a dramatic story. ...

I didn't know what my role was supposed to be. I knew that it was something that I wanted to respond to, but I knew whatever I said really wasn't gonna make a difference, y'know. Three thousand people were dead; I just got a talk show. ... So I dunno, I just, I tried to explain how I felt and ... that was it.

On his favorite guests

David Letterman Will Retire In 2015

When Joaquin Phoenix came on [pretending he had quit acting to be a rapper] I just loved it. That was a bit reminiscent of Andy Kaufman. I loved it when Andy Kaufman would come on. It was just fantastic and unusual and the audience never knew whether he was serious ... Tina Fey last week, I thought that was great. That was a spur-of-the-moment, something that she was, y'know, she's put some time and effort into that. A lady doesn't take her dress off unless there's been some time and effort put into it.

And I love when Bill Murray comes on because ... he's one of these guys who, irrespective of what he's doing, he's funny. And he goes to great, elaborate lengths to do things. And it's always unnecessary. Because he's just funny. And for me it's very satisfying to see the big elaborate thing just kind of collapse on itself. And he still is tickled by it because ... all he is, is funny.

On ceding control of the show, including the final episode

When I get, had my heart surgery — this was 15 years ago — I said, "That's it, I'm not going to rehearsal anymore, I'm not going to meetings anymore." Because I have — the ADD, the HDAC or whatever you have — and I can't sit through another damn meeting.

So when it came time for the last show I said, "You guys" — speaking to the producers — "you start doing it." ... And I'll just do what I think I'm responsible for. So that's what happened. And from what I've seen they're doing a very nice job. And all I have to worry about is my one little segment.