Accessibility links
Review: 'Nimona,' By Noelle Stevenson Noelle Stevenson's webcomic Nimona, about a shapeshifter who aspires to be an evil sidekick, is now out in book form. Reviewer Tasha Robinson praises the story's ebullience, complexity and intensity. 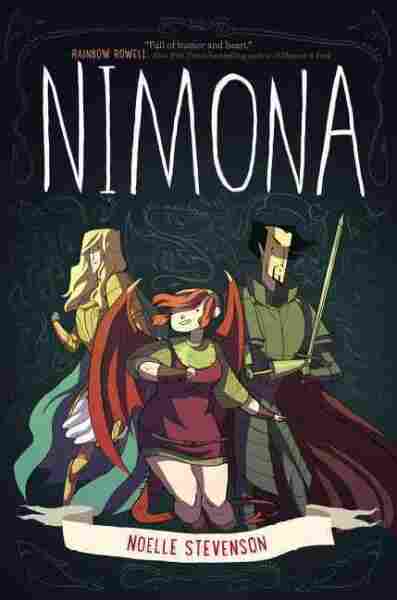 Over the course of the collected Nimona, it's possible to watch artist Noelle Stevenson blossom from a student to a superstar. Nimona originated as a two-page art-school experiment that expanded into a webcomic, published biweekly on Stevenson's website over the course of two years. What began in a visually and narratively simple style in June 2012 rapidly became more elaborate and sophisticated, expanding into a showcase for Stevenson's rapidly evolving talents. In 2013, the series won Slate's Best Web Comic Of The Year prize, and the audience — fiercely loyal, highly involved and prone to vocally agonizing over each new online update — grew rapidly.

By the time Stevenson finished the story in September 2014, she was in an entirely different place in her life. She'd graduated from the Maryland Institute College of Art, interned at comics company BOOM! Studios, started co-writing her first monthly print comic, Lumberjanes, and become an immensely popular fan artist on Tumblr.

Some of the credit for her still-growing popularity and established place in the mainstream comics world — most recently as a writer on Marvel's Thor and Runaways — comes from her ubiquity online, drawing much-circulated silly pop-culture spoofs like the ones that reimagined the Lord Of The Rings characters as sullen hipsters. Still more of her popularity emerged from her willingness to bare herself to her fans, posting frequently about feminism, politics and creativity, and occasionally drawing comics on darker personal issues, like depression and loneliness.

But much of the credit for her flowering career can be laid at Nimona's feet. It's a perfect storm of a series: Much like Jeff Smith's Bone, it starts in a goofy, accessible place before deepening into a morally and emotionally complicated fantasy. It goes in thrillingly unpredictable directions not hinted at in the early pages. And by the end, it's become a gripping horror story, threatening the relationships and lives of characters whose prickly distance from each other just makes their relationships seem more appealing.

The collected edition of Nimona features minor revisions to the opening pages, to bring the art into line with Stevenson's later designs. But it keeps the story and most of the script intact just as it first ran online. Ebullient, energetic shapeshifter Nimona presents herself to supervillain Ballister Blackheart, claiming she's been assigned as his sidekick. Even after exposing her ruse, he takes her along on his latest mission to avenge himself against The Institute, which raised him and then betrayed and ejected him.

The story takes place in a proto-medieval yet high-tech society full of mad science and noble knights; it's a grab-bag mythos that often seems to encompass whatever feels appropriate in the moment. Initially, it also seems arch and tongue-in-cheek. Blackheart's nemesis, the Institute's chief knight, is a poncy blond who goes by Sir Goldenloin, and spouts lines like "Unhand that science!" and "We've got to fight because that's my job!" Goldenloin clearly thinks of himself as a chivalric storybook hero, with Ballister, his fallen former best friend, as a mustache-twiddling baddie to be bested amid banter.

But Nimona rapidly changes the rules, proving more bloodthirsty and violent than the story seems to warrant, or than Goldenloin and Blackheart can accept. As Stevenson's art becomes more complicated, and the colors become richer, the tone and focus change rapidly. What starts as Nimona's story — a cute wish-fulfillment lark about a refreshingly chubby girl with magic powers and a subversively unladylike attitude — soon becomes Blackheart's story, about a betrayed and bitter man who has to rise to the challenge of saving his kingdom, his doltish former lover, and if possible, the sidekick who doesn't want to be saved.

Nimona is a perpetual surprise. It's still puckish even when it turns grim, but for something that starts out so lighthearted and silly, it's astonishingly intense. It's filled with shocks and sudden reversals that drove the webcomics fandom to distraction when these pages were being doled out at the rate of two a week. (The fans were often so angst-stricken once things got rough that Stevenson started posting reassuring doodles on Tumblr, promising that in an alternate universe somewhere, Blackheart and Goldenloin were gay dads with Nimona as their adopted toddler.)

Collected in book form, it's a fleet-moving, breathless story that develops rapidly from a playful power fantasy into a completely different kind of story. Like Stevenson, it goes places that were hard to imagine at the beginning.