Accessibility links
Chipping Away At The Mystery Of The Oldest Tools Ever Found How do you prove a rock was actively shaped and used as a tool more than 3 million years ago? Scientists found a kit of more than 140 artifacts in one spot and say the tools' crafters were pre-human. 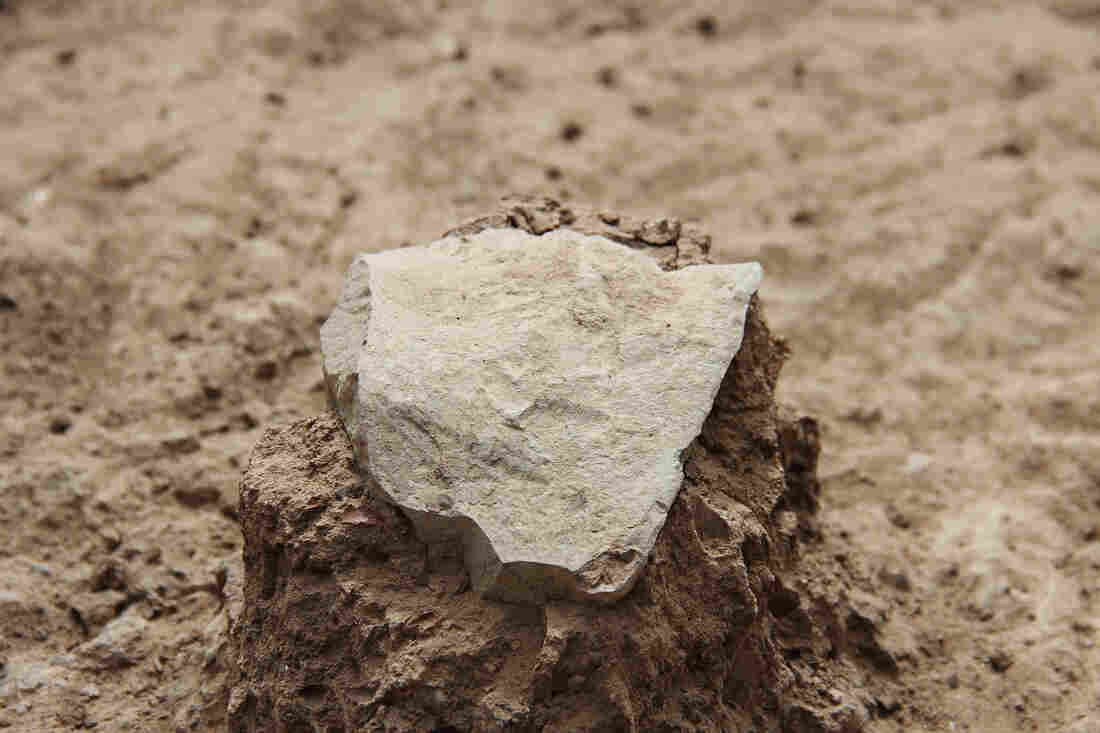 An ancient stone tool unearthed at the excavation site near Kenya's Lake Turkana. It's not just the shape and sharp edges that suggest it was deliberately crafted, the researchers say, but also the dozens of stone flakes next to it that were part of the same kit. MPK-WTAP hide caption 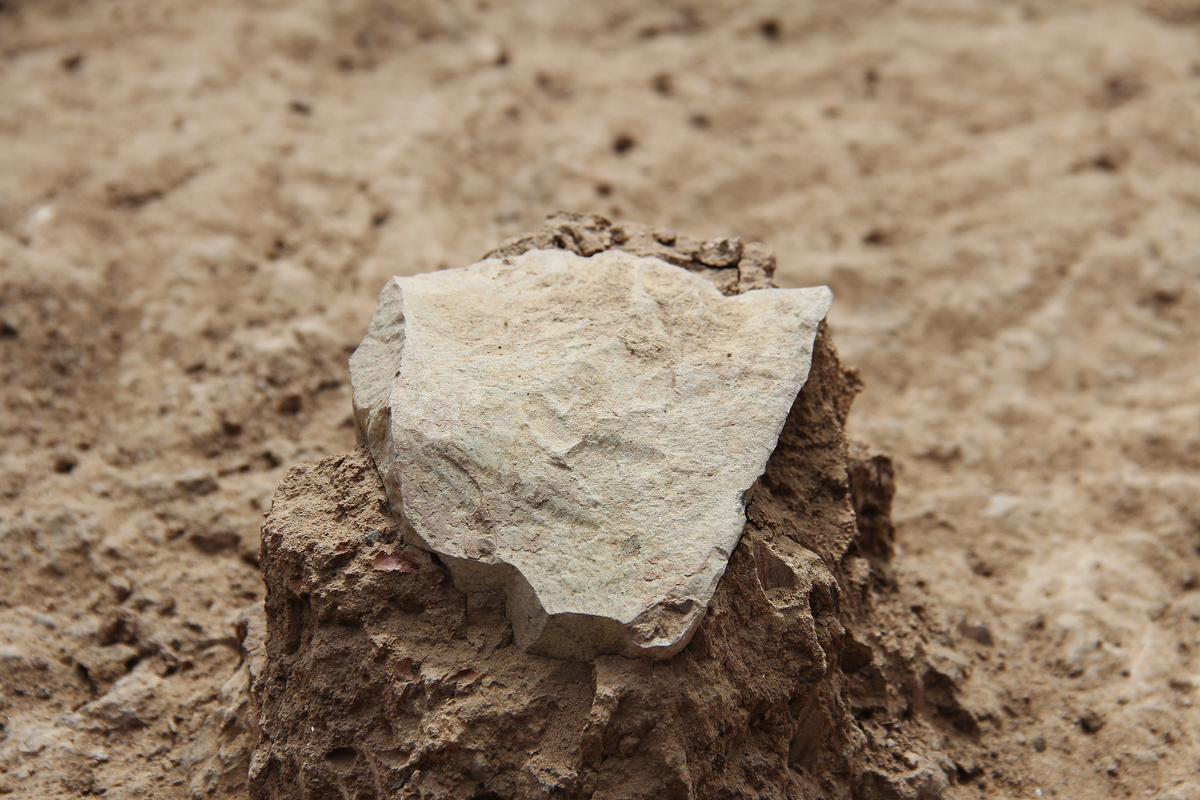 An ancient stone tool unearthed at the excavation site near Kenya's Lake Turkana. It's not just the shape and sharp edges that suggest it was deliberately crafted, the researchers say, but also the dozens of stone flakes next to it that were part of the same kit.

A scientific discovery in Kenya, first reported in April, challenges conventional wisdom about human history, say the scientists who made the discovery and are now releasing the details. The scientists say the collection of stone tools they turned up near Lake Turkana were made long before the first humans are thought to have evolved.

This week the scientists unveil the details of their discovery in the journal Nature.

"The magic is being able to touch these stone tools for the first time, after 3.3 million years."

What's remarkable about the find is that, up until now, scientists widely believed that humans invented stone-tool making. In fact, anthropologists call the earliest humans Homo habilis -- meaning handy man.

The toolmaking technique associated with humans involves whacking rocks together in just the right way to fashion sharp tools. Until recently, the evidence — fossil bones and very old tools — has suggested this talent emerged about 2.5 million years ago.

But a team led by scientists from New York's Stony Brook University discovered stone tools that are much older than that, in a desert area west of Kenya's Lake Turkana. The tools are now in a museum in Nairobi. 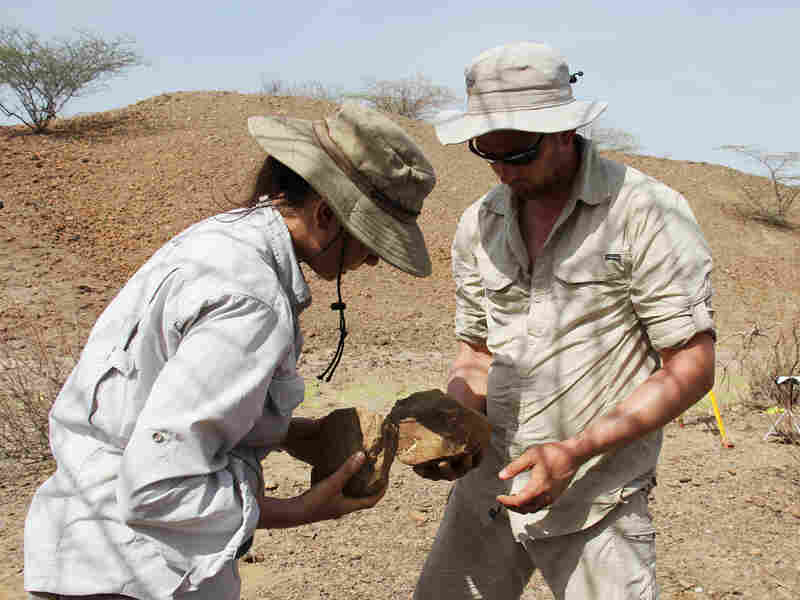 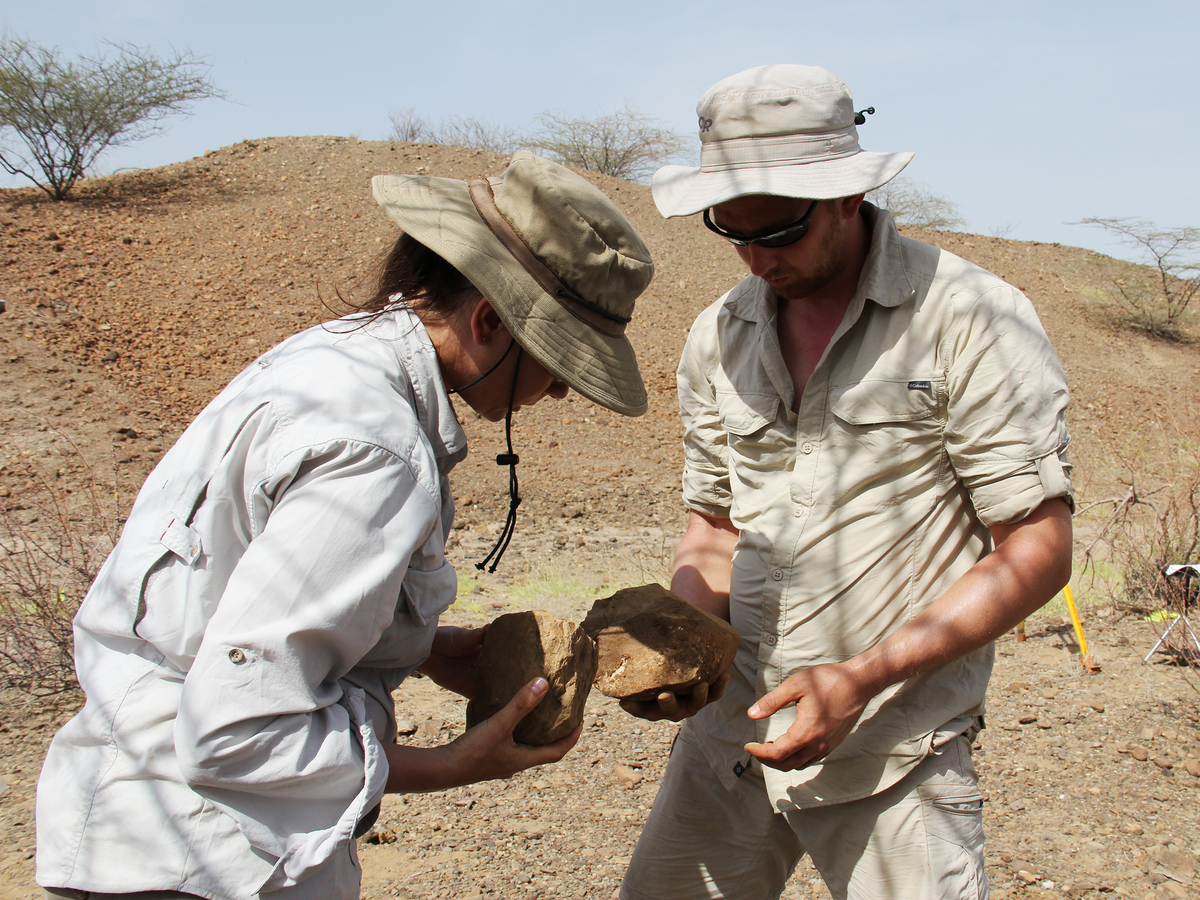 Archaeologists Sonia Harmand and Jason Lewis, of Stony Brook University, examine stone tools. Initially, she says, the scientists didn't realize the tools they found dated to hundreds of thousands of years before the first humans.

Team leader Sonia Harmand says Sammy Lokorodi, a Kenyan goatherd and fossil hunter on the team, found the first stone tool on the surface. Harmand knew it was old but at first didn't quite know what they had.

"We were very, very excited," she says. "But at that time, we didn't know, at all, we were going to have these stone tools begin at 3.3. million years ago." That's hundreds of thousands of years before humans evolved from apelike ancestors.

Reliably confirming the age of this assemblage of stones was just the start. The researchers also had to prove that the sharp rocks had actually been crafted by hand and weren't just stones accidentally shaped like tools by natural forces — wind or water, for example.

"The jumping up and down lasted a couple of minutes in the field," says Jason Lewis, another archaeologist and member of the Stony Brook team. "We very quickly had to put our nose to the grindstone to put everything together to convince the rest of the world."

What convinced the team (and other scientists who have seen the tools) was the fact that there was a whole stone-tool-making kit right there — all in one place. The kit was just like the ones the first humans used; it included big core stones, flat anvil stones and sharp flakes.

To make a tool, you place the core stone on the anvil stone and strike it hard with another rock, Lewis says. Certain marks on the stones found in Kenya confirm they were manipulated this way.

"It's clear that the intention was to hit the stones together in such a way as to break off a series of sharp flakes," says Lewis.

And they found lots of these sharp flakes at the site. These are the "knives" of the Stone Age. They might have been used to cut meat off bone, or perhaps to cut up vegetable matter. In all, the team found more than 140 toolmaking artifacts at the site. While they weren't as sophisticated as tools that have been associated with the first humans, they were definitely crafted intentionally.

And at least one of the flakes actually fit perfectly into the grooves of one of the core stones. Harmand says that was the cherry on the cake — further evidence that someone had worked on these rocks at the site. 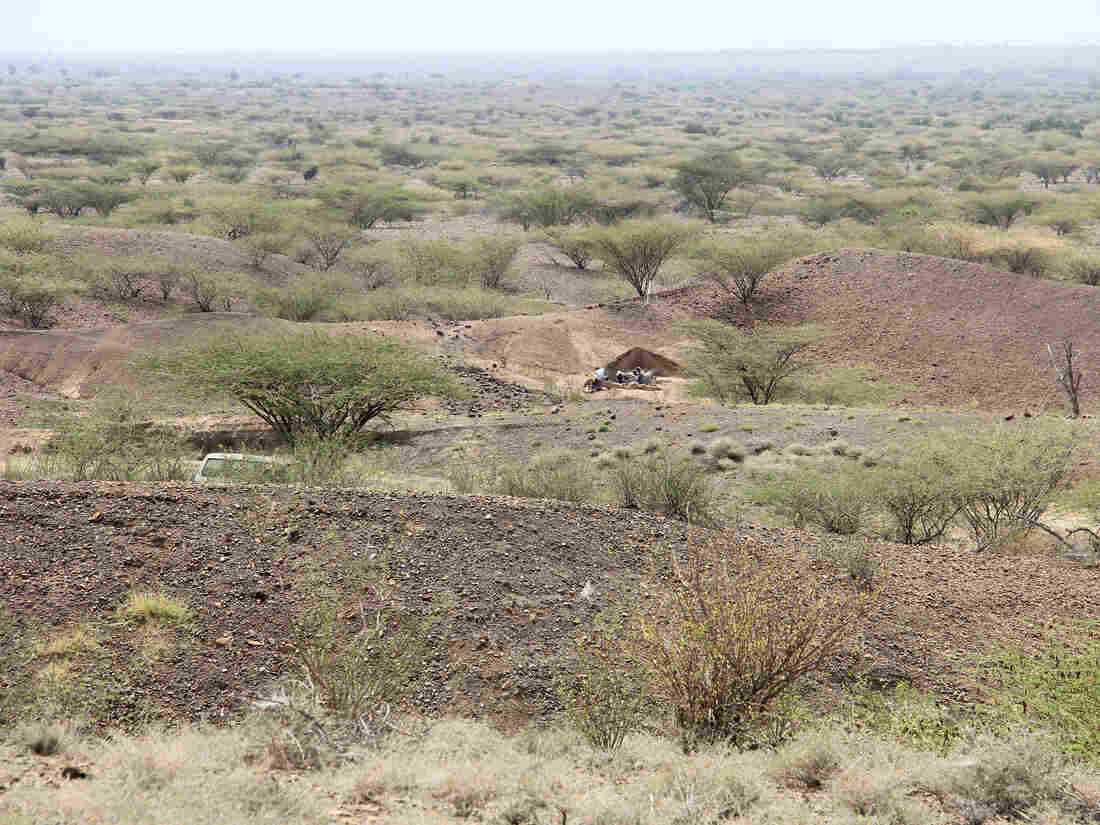 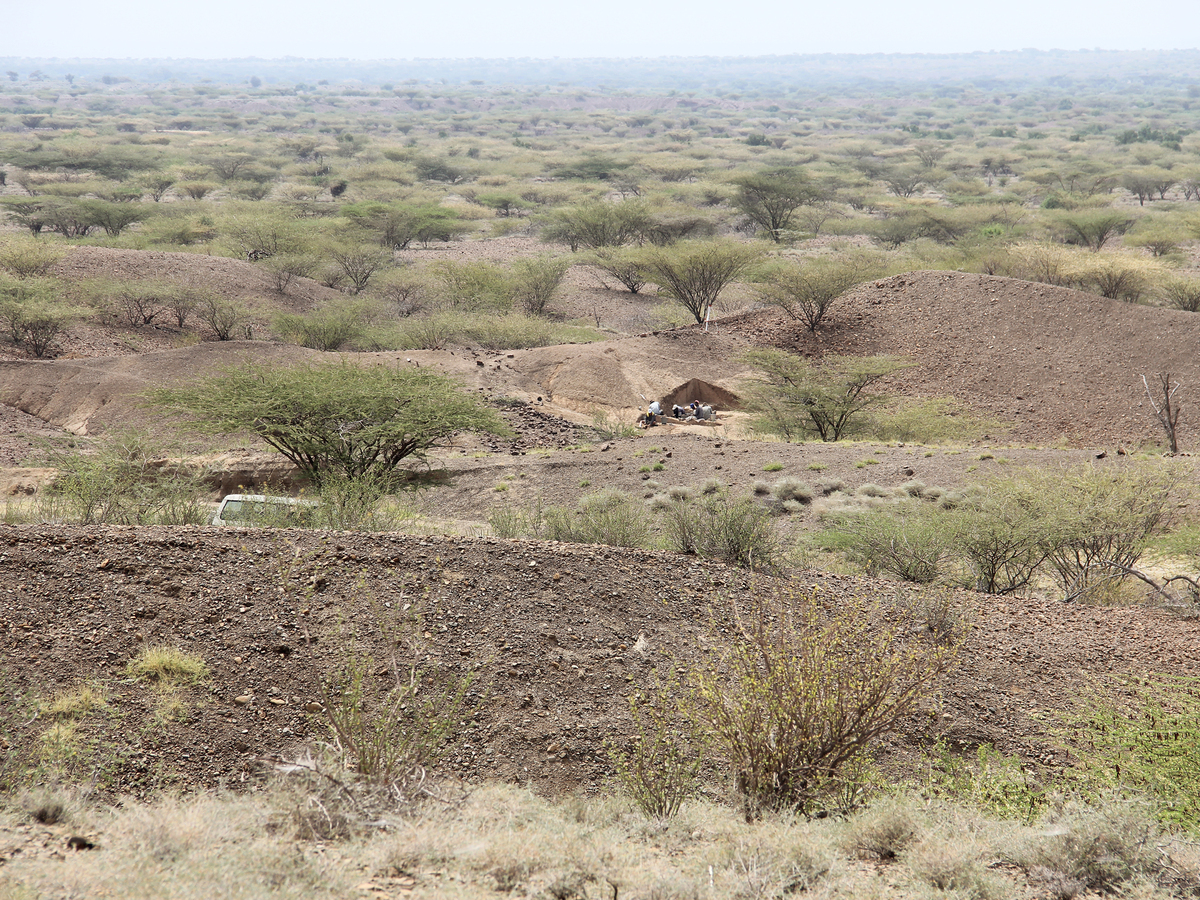 View of the excavation site near Lake Turkana.

"The magic is being able to touch these stone tools for the first time, after 3.3 million years," she says.

So who made these tools? Certainly, chimpanzees can use stones as tools, to hammer and open nuts, for example. Chimps also fashion sticks to fish out termites from nests. But they don't manufacture stone tools like these.

The Stony Brook team says the maker of these tools might have been an apelike creature called Australopithecus, or perhaps a lesser known primate of the period, Kenyanthropus. Australopithecus is known from the famous fossil Lucy, about 4 feet tall, and living in trees, as well as on land.

But even if humans can no longer lay claim to inventing stone tools, it's worth considering whether toolmaking would have been a regular part of the Australopithecus skill set.

"The question, I think, is not could they have, but would they have done so repeatedly," says Erin Marie Williams-Hatala, a paleoanthropologist at Chatham University in Pittsburgh, who studies stone tools.

Maybe Early Humans Weren't The First To Get A Good Grip

She says the wrists and hands of Australopithecus — which included long fingers and slender thumbs — were adapted to grasping tree branches. Sure, maybe these hands could also make tools, Williams-Hatala says, but it probably would have been a chore.

"And maybe," she says, "because it took them so long to do it, it didn't make sense for their subsistence strategy — for the way that they lived their lives."

Making tools probably didn't become a part of everyday life, she says, until the evolution of the first human hands, which had big strong thumbs that could connect with the fingertips in a tight grip and offered better fine motor control. Also, says Williams-Hatala, the human wrist is much more flexible in a way that enabled an efficient tool-cutting motion.

"When our hands and wrists changed to a sufficient degree," she says, "it began to make sense for our ancestors to engage in these behaviors in a new way, and probably more frequently" — maybe frequently enough to give humans an edge in the competition for survival.