Accessibility links
Friendship, Magic And Danger Blossom In 'Uprooted' Naomi Novik's latest is a reworked "Beauty and the Beast," with a powerful female friendship at its heart. Reviewer Amal El-Mohtar calls it "moving, heartbreaking, and thoroughly satisfying." 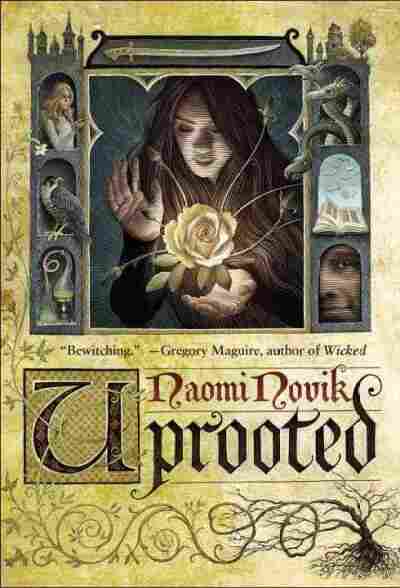 I've read a staggering number of excellent books recently, and it has done things to my head. I'm not sure the human brain was meant to read so many brilliant books in such short order — even less sure that swinging my reading-pendulum from Hannu Rajaniemi's collected science fiction stories to Naomi Novik's sword-and-sorcery fantasy novel is at all wise. By all rights I should have tumbled into Uprooted feeling disoriented and confused, dissonant and harsh in my criticism — but no. Uprooted has leapt forward to claim the title of Best Book I've Read Yet This Year.

Between the warring kingdoms of Rosya and Polnya is the Wood, a place of corruption and danger. Protecting the villages of Polnya against the Wood is a wizard called the Dragon, to whom the villagers owe fealty. Every 10 years the Dragon chooses a young woman from the villages to come live with him in his tower as a servant — after which she never returns to her family, even once released. He always chooses the girl who seems special in some way, the most beautiful or talented, the one whose loss will be most keenly felt. The Dragon has been doing this for as long as anyone can remember.

Agnieszka of Dvernik is 17, the age at which the Dragon's choosing occurs, and she knows for certain that the Dragon will choose Kasia, her best friend. In fact everyone knows this, including Kasia's family, who have steeled themselves against the reality for years: Kasia is gorgeous, skillful, brave. Agnieszka is in many ways Kasia's opposite — uncouth, coltish, unable to keep herself clean and presentable for more than a few minutes at a time. The Dragon's choice seems inevitable. But when the moment comes, the Dragon surprisingly — and reluctantly — chooses Agnieszka, compelled by the King's law that demands anyone with magical ability must receive magical training. Agnieszka, it seems, has that ability — which she will need when the Wood comes calling, threatening her family and friends. But the Dragon is an impatient and sarcastic teacher, Prince Marek of Polnya has a secret agenda, and everything gets complicated very quickly.

Summing up the plot does Uprooted a disservice. For one thing, it unfolds into at least three books' worth of plot, but it never feels rushed, never feels anything less than grounded and meticulous in its exploration of character and setting. Watching the plot develop is like watching time-lapse footage of a plant growing, unfurling leaves, gaining height and depth simultaneously: it's an organic, vivacious development that builds seamlessly on what came before. Agnieszka's training, her failures and successes in magic, her loneliness and fears and frustrations, all bud and blossom into new adventure even as the roots tangle into deeper complication: The ultimate source of the Wood's malice.

"Uprooted is a triumph on several fronts — characterization, pace, a warm and beautifully realized setting, a tensely escalating threat level — but for me its most remarkable, wonderful aspect was in Agnieszka's love for her friend, which becomes the novel's driving force."

It's no secret—in the way that the sun is no secret—that I crave seeing strong friendships between women in fiction. I'm forever talking about how sad and strange it is that the only stories that seem worth telling or reading are stories about sexual romantic love. Uprooted is a triumph on several fronts — characterization, pace, a warm and beautifully realized setting, a tensely escalating threat level — but for me its most remarkable, wonderful aspect was in Agnieszka's love for her friend, which becomes the novel's driving force.

I loved Agnieszka completely. I was reminded of the love I felt while reading Rachel Hartman's Seraphina and Shadow-Scale, the love peculiar to inhabiting the perspective of a young woman trying hard to do and be her best in very difficult circumstances. I felt her every joy and disappointment and loss with a keenness that often forced me to exclamation, to stamping my feet or clutching my Kindle or walking angrily around the room. Her devotion to Kasia often moved me to tears, and was so reflected in the novel's end-game that I have to stop talking about it because spoilers, but trust me, it's a huge deal.

This is a book that takes any number of classic fantasy stances — a grumpy wizard in a tower, a wicked Wood, a division between High Magic and Low Magic — and makes them feel vibrant and new. It's so shockingly good at the things it's doing, so perfectly immersive, that saying "I see what Novik is doing" is akin to saying "I see that water is wet" while enjoying a languorous sunset swim.

Moving, heartbreaking, and thoroughly satisfying, Uprooted is the fantasy novel I feel I've been waiting a lifetime for. Clear your schedule before picking it up, because you won't want to put it down.