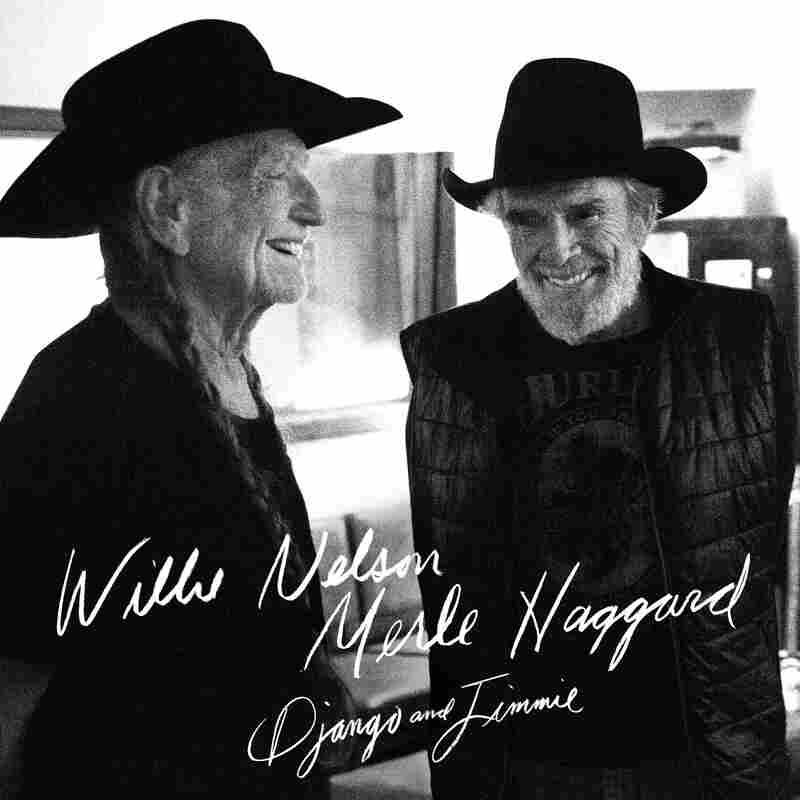 Django and Jimmie Courtesy of the artist hide caption

Love your old uncles while you have them. Mine used to hang around near the drinks table at family gatherings, comparing the weird bumps growing on their ears, sharing jokes they'd learned in the Army, and blowing the kids away with stories culled from decades' worth of interesting exploits. Most have gone to the next beyond by now, but I hold my uncles' devil-may-care spirit close to my heart. People have a lot to learn from those among them who've lived long enough to not worry about any particular outcome.

Luckily, music still has a few old uncles, chief among them Willie Nelson and Merle Haggard. The country titans share a long history. Its landmark was the 1983 album Pancho & Lefty, which set the standard for top artists collaborating with and beyond their home genre. Nelson and Haggard could have stopped there, but they've continued to work together on numerous recordings and tours, including the recent cross-country jaunt that anticipated this new release. I caught one of their shows in 2013 and was dazzled by the intact artistry of these two men, one on either side of 80; their laid-back, wide-ranging sets touched upon jazz and R&B as well as country and showed their authority as virtuoso raconteurs and masters of the most advanced level of IDGAF.

They bring that utter assurance into Django And Jimmie, Nelson's sixth studio release for the Legacy label since 2012. (He's rivaling Betty White for the title of hardest-working senior in show business.) The title track connects it with the inimitable Pancho & Lefty by celebrating a pair of musical iconoclasts: the guitarist Django Reinhardt and Jimmie Rodgers, the singing brakeman whose stardom defined early country music. The song puts eclecticism upfront as a value, and the rest of the album fulfills that mandate. There's plenty of humor in songs like the smoke-out anthem "It's All Gone To Pot" and the shaggy-god reminiscence "Missing Ol' Johnny Cash," which also features the great Bobby Bare. There are tender odes like the Beatles-esque "Where Dreams Come To Die," co-written by Nelson and album producer Buddy Cannon. And there's some lightning-sparked Bakersfield spirit in a 50th-anniversary rendition of Haggard's signature song "Swinging Doors."

There's so much affection running between these two lifelong compatriots and the seasoned musicians who share their space in the studio that nearly any track on Django And Jimmie will likely lift the spirits of even the gloomiest listener. Nelson and Haggard cover each other's classics, rib each other about the girls they've loved before, and wrap it all up with the gentle mutual-admiration fest "The Only Man Wilder Than Me." In a promotional video for that song, someone asks if the buddies wrote that song. "Merle did," Nelson says. "I told him to." And they laugh, knowing that this will be another great story to add to their old-uncle treasure chest.