Accessibility links
A Special Focus On Caring For Vets At The End Of Their Lives Service members often struggle with guilt, abandonment and regret. The Army and the Department of Veterans Affairs are working to help make those last days meaningful.

Caring for the nation's veterans at the end of their lives can be a complex task. Service members — especially combat veterans — can struggle with guilt, abandonment and regret.

The Army and the Department of Veterans Affairs are working to help them. At one Army hospital south of Seattle, its mission is to make those last days meaningful. 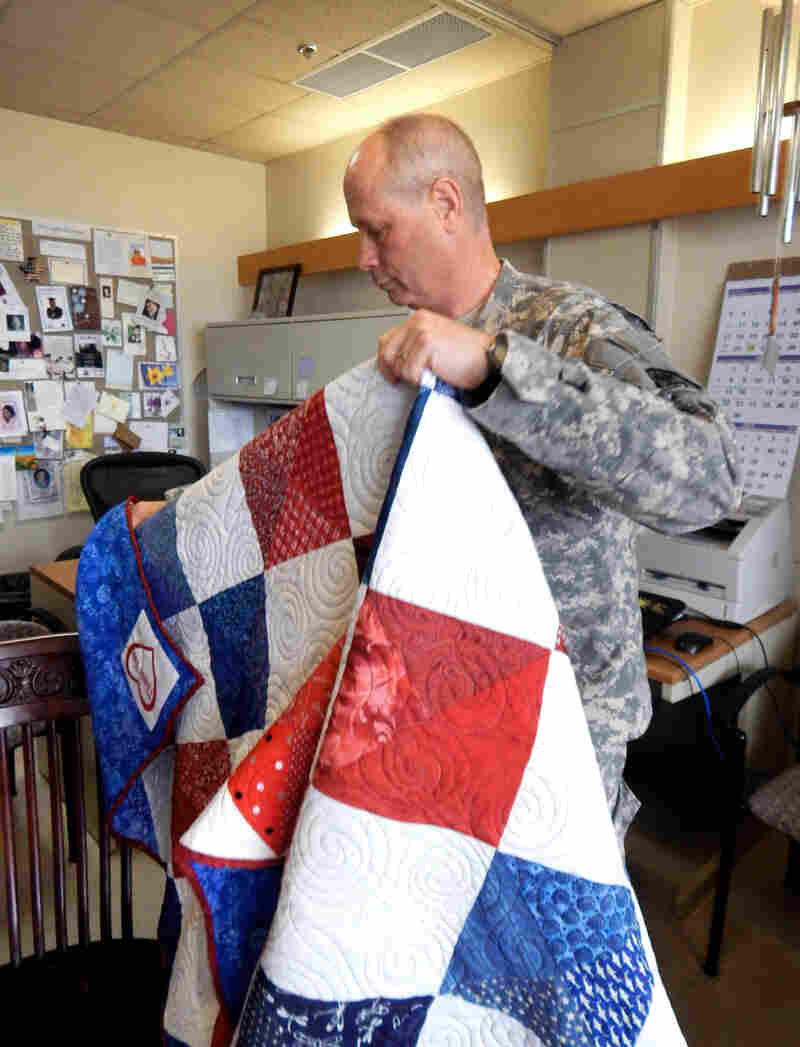 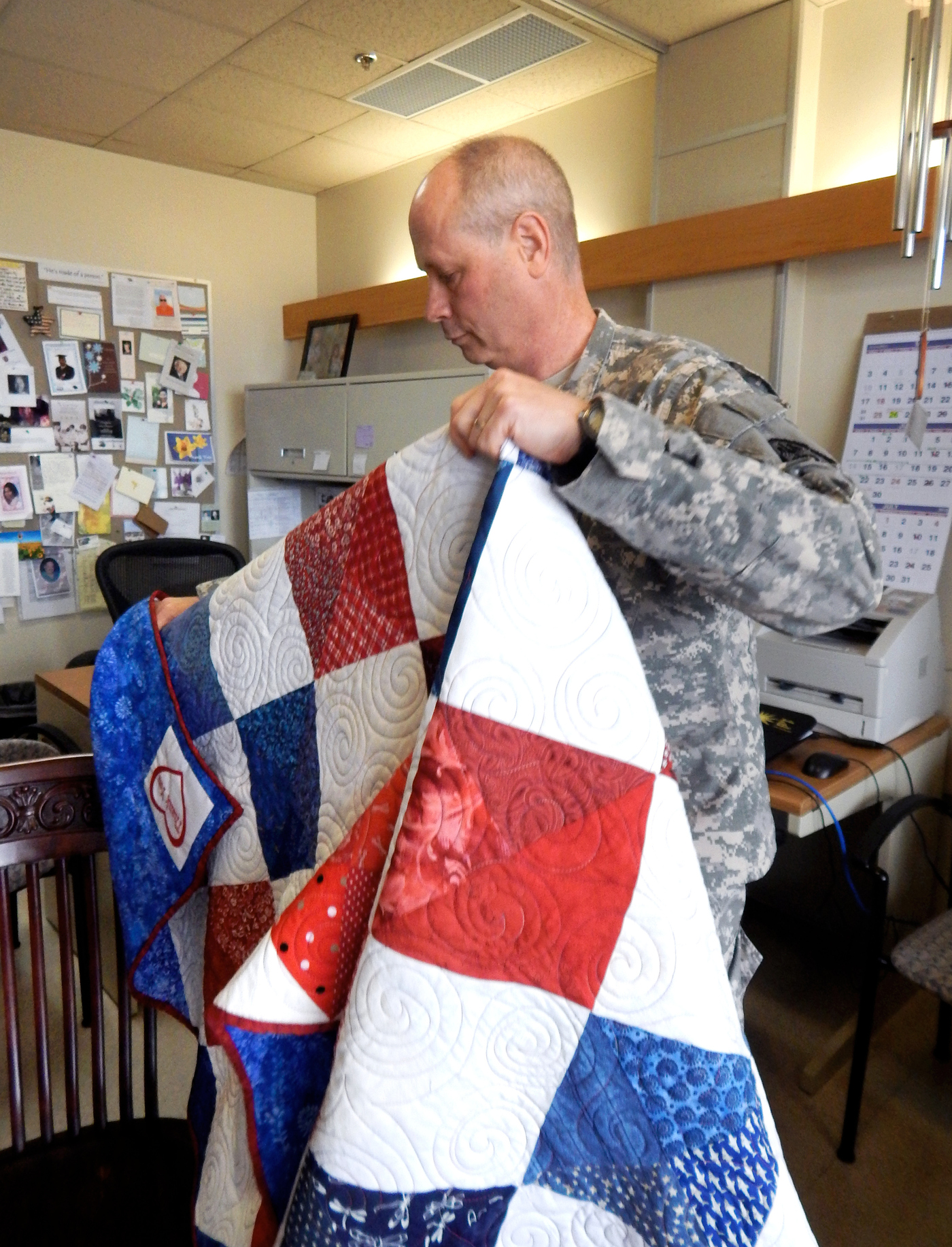 Col. Kenneth Trzepkowski, chief of palliative care at Madigan Army Medical Center, unfolds one of the handmade quilts donated to the hospital for the palliative care patients.

Mark Goodwin rode a Harley. He liked to barbecue, and he loved the Seattle Seahawks — the retired Army first sergeant was a season ticket holder.

"He's the kind of person that wanted to make sure that everyone else in his life was taken care of," says his wife, Traci Goodwin. "I think that's part of being a soldier, of being a leader. So he was used to looking after people."

But when Mark was diagnosed with stage 4 colorectal cancer last year, she says it was Mark who needed someone to look after him.

He ended up at Madigan Army Medical Center in Tacoma, Wash. The Palliative Care Team there helped the couple manage everything from pain care to Mark's veteran benefits.

"While we were focused on recovery and healing, they wanted to make sure that all of his documents were in order ... to make sure that I wouldn't be left with a pile of paperwork or unsure of what to do," Traci says.

The end of life is an intimate journey. When confronted with it, many are unprepared.

To help, Madigan has one of the Army's most comprehensive and well-trained end-of-life teams. It includes physicians, nurses and social workers. Chaplain George Wallace works with the group full time.

"Sometimes what emerges are issues of betrayal and guilt. We have these really, really high — almost superhuman — standards. We call it the warrior ethos: 'I'll never quit,' that sort of thing, and that's great," Wallace says. "But it often comes with baggage after the fact, if you feel like you didn't live up, or, 'I left a buddy behind that I couldn't bring home.' "

There are other challenges: Some vets are alone at the end of life. They may be estranged from friends and family because of post-traumatic stress or substance abuse issues.

It can be a terrifying place, but also ripe for transformation and forgiveness.

Wallace says he has witnessed it many times. 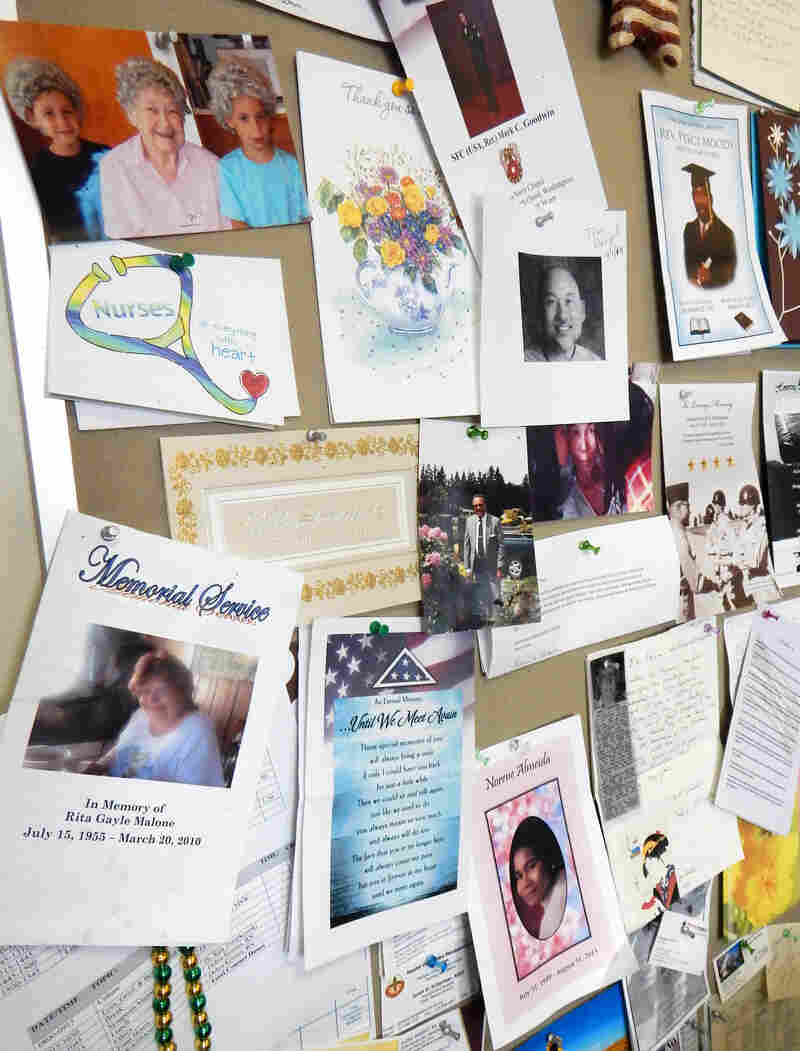 A wall of tributes, prayer cards and notes of appreciation from families whose loved ones have been cared for at Madigan Army Medical Center. Patricia Murphy/KUOW hide caption 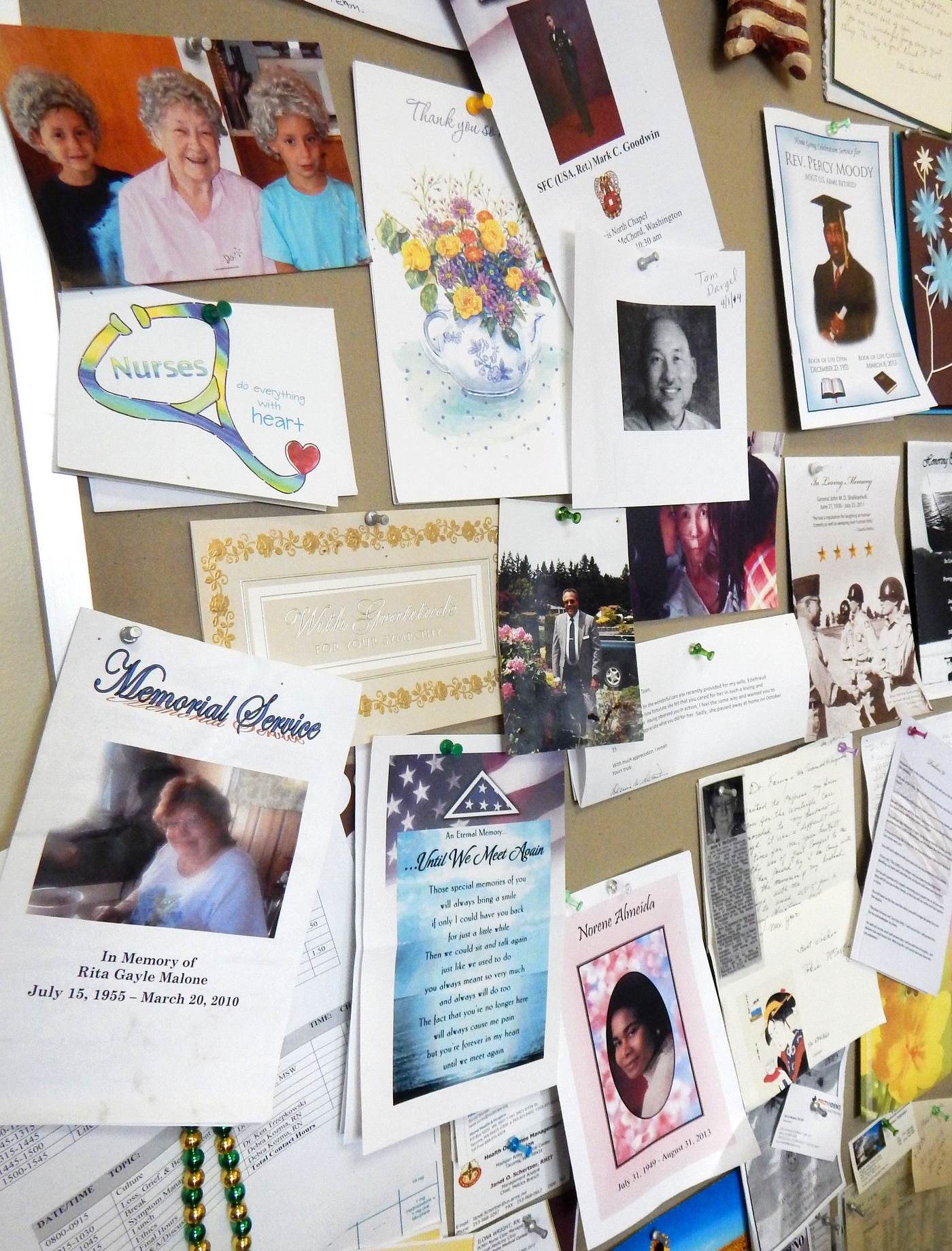 A wall of tributes, prayer cards and notes of appreciation from families whose loved ones have been cared for at Madigan Army Medical Center.

"You begin to realize that you're running out of time, so that has a way of jarring and opening a space that can be very fruitful," he says.

They spent a year at the medical center — the doctors trying to save him. But the couple knew they were walking on a knife's edge.

"When Mark finally realized that perhaps it wasn't going to work out the way we had been praying for, he called them in along with his nursing team and wanted to talk to them, and he actually asked me to leave the room so that he could speak to them in private," Traci says.

She says she was stunned. They'd been married for two decades and told each other everything.

Marc Goodwin's request to speak privately with his caregivers revealed the extraordinary relationship he'd built with them.

He entrusted them to deliver a message to his wife about his deepest fears during his final hours.

"They relayed to me that his concerns were me and how I would deal with it," she says. "I went in after that to give him the peace of saying it's OK. If you are ready, then I can let you go."

Mark died the next evening.

When a veteran or a service member dies at Madigan Army Medical Center or the VA, an American flag is placed over the body. As it's wheeled from the room, hospital staff line the hallway.

Some salute, others stand at attention, to honor a veteran's service and sacrifice.

An earlier version of this story placed Madigan Army Medical Center in Seattle. It is located south of Seattle in Tacoma, Wash.