Accessibility links
Women Fight Their Way Through Army's Grueling Ranger School Two years after the Defense Department lifted the ban on women serving in combat units, the Army is allowing women to go through the training program for soldiers who aspire to be infantry leaders. 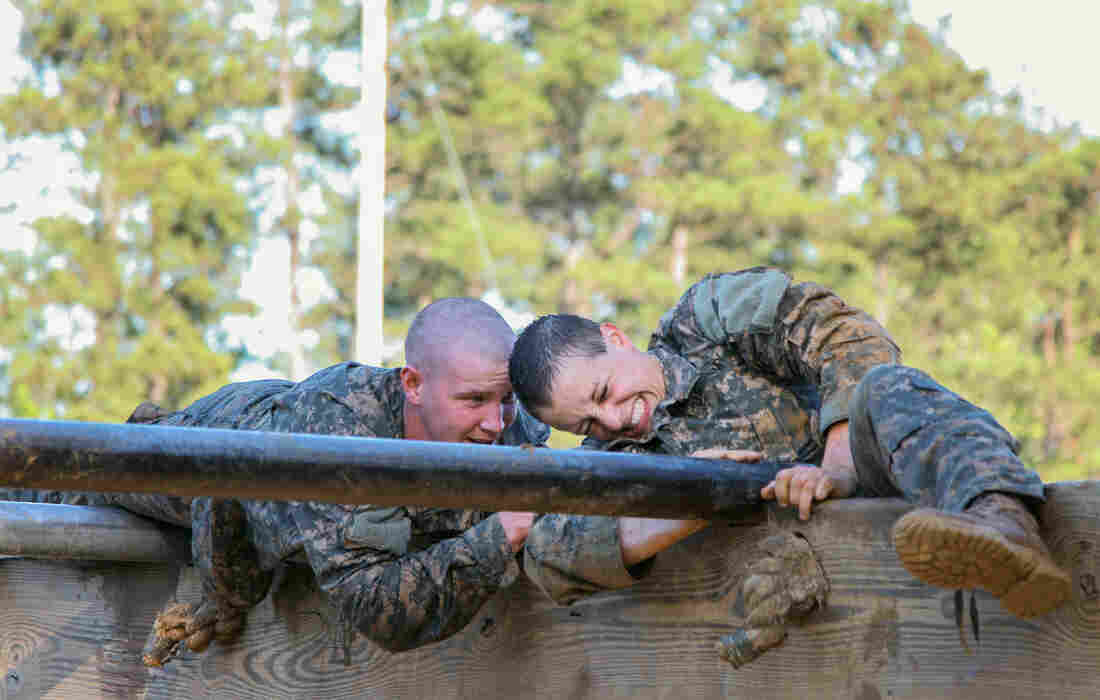 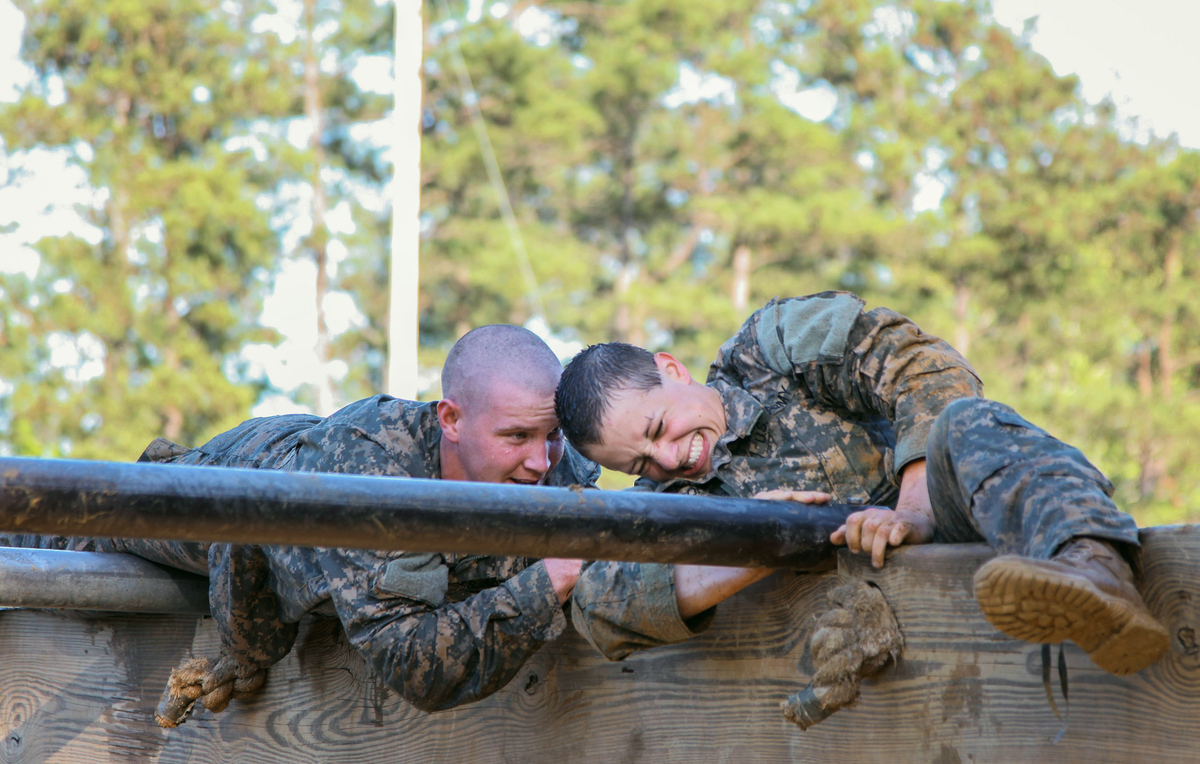 U.S. Army Soldiers conduct the Darby Mile buddy run and an obstacle course during the first gender-integrated Ranger Course at Fort Benning, Ga. Among the 400 students, 19 are women.

At Georgia's Fort Benning, female soldiers are fighting a two-month battle. Their enemies? Hunger, fatigue, even hallucination. They're fighting their way through the Army's notoriously hard Ranger School, trying to make history by becoming the first women to graduate from it.

It's one of several Pentagon experiments to see how best to move women into ground combat roles. And it's a test that thousands of men before them have failed.

With sharp-tongued instructors looking on, Ranger School students rocket down a zip-line from a 70-foot tower. They land into a pond so hard that they can dislocate limbs if they hit the water wrong. The instructors are trying to see who might struggle with heights and water because later the class moves into the mountains and then to coastal Florida.

First Lt. Tracy Ross is one of 28 women observers who the Army brought in to help evaluate the training. She had to take all the physical tests the students did, but didn't have to pass them.

"We're just here to understand what they're going through, so actually going through an event gives us an idea of how it's going to be like so we can provide feedback," she explains.

It's only hours into the 62-day course. By this point nearly a quarter of the 400 students have washed out for good, including three of the 19 women. In a normal year, only about half the men who try are able to finish.

Ranger school is voluntary, but vitally important training for anyone who aspires to be an infantry leader. About 90 percent of the Army's senior infantry officers wear the coveted, arch-shaped Ranger Tab.

"Everyone... wants the ranger tab. It's kind of like instant credibility," says Ross.

Opening the school to women is billed as a one-time experiment. Two years ago, the Defense Department lifted the ban on women serving in small ground combat units. Now each service branch has until the end of the year to figure out how to fit women into those jobs, or explain why it can't.

Three hundred students pair off in a giant, dirt and woodchip circle known as the Pit. They brand black plastic daggers; an instructor with a bullhorn coaches them on knife fighting.

A female soldier a little more than 5-feet-tall with a blank expression faces a man, who is 6-feet-tall. After the knife practice, instructors urge the students to crawl, jog and lunge in a circle yelling, and at times hoisting each other aloft for the buddy carry.

One woman staggers along with a nearly 200-pound man draped across her shoulders. 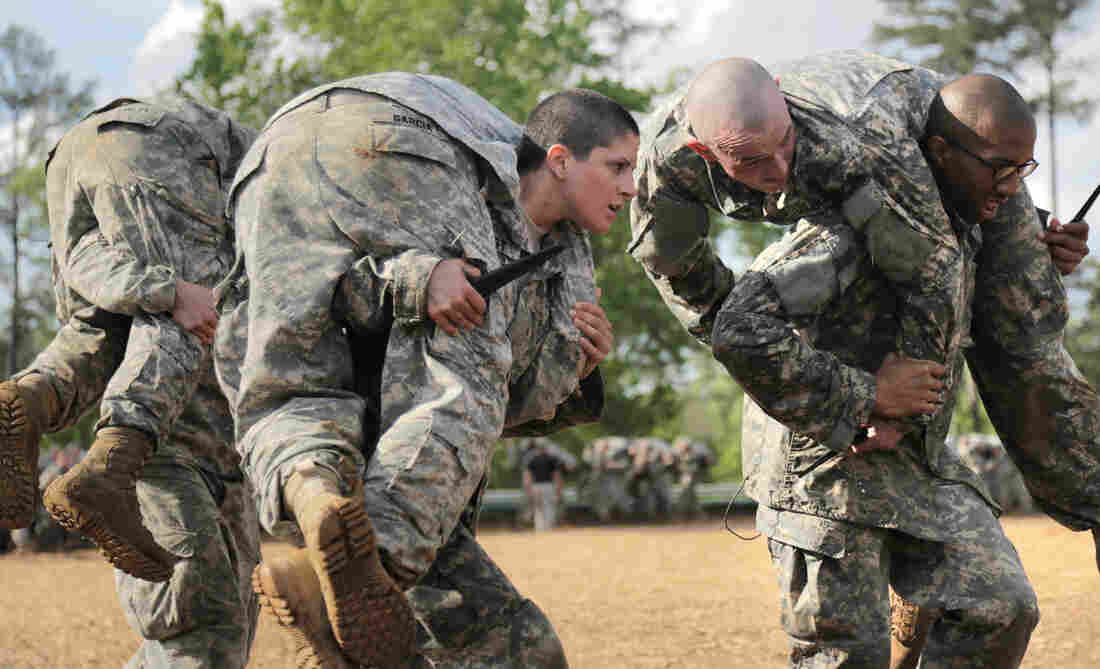 The buddy carry is one of the requirements of soldiers during the Ranger training program. Spc. Nikayla Shodeen/U.S. Army hide caption 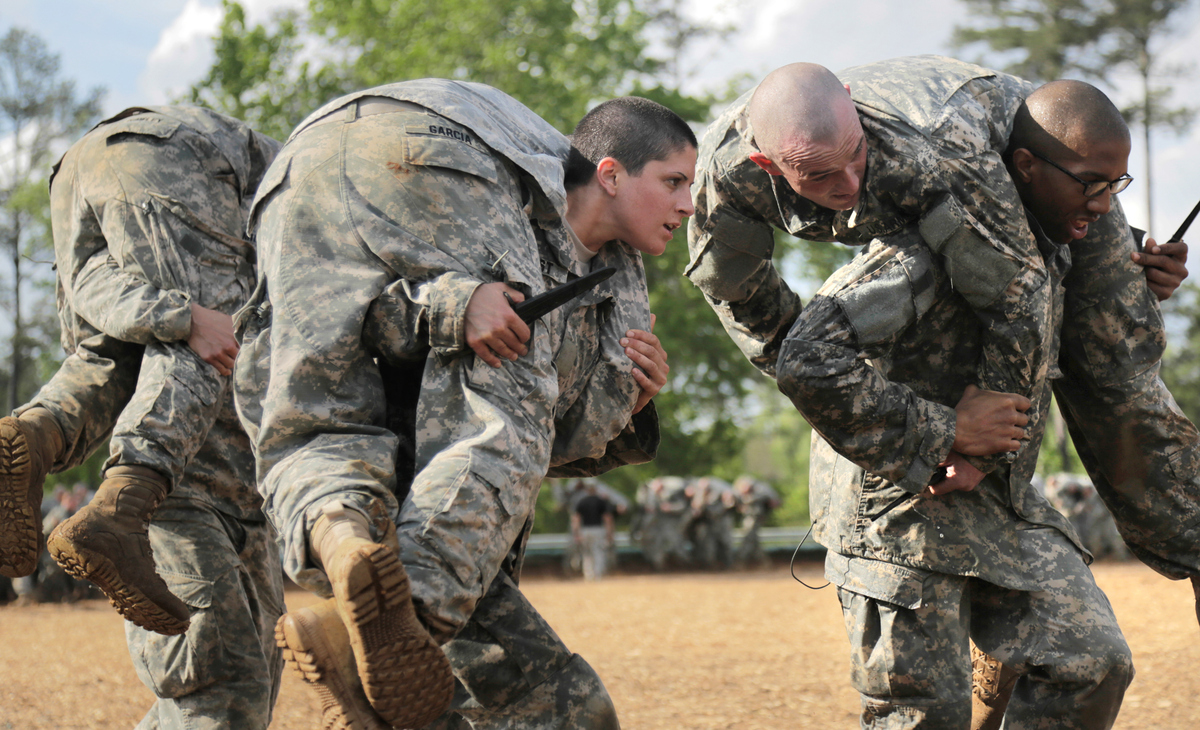 The buddy carry is one of the requirements of soldiers during the Ranger training program.

The instructors are starting a process that Ranger School is famous for: Pushing students to their physical and mental limits for weeks on end.

Most who drop out of Ranger School do so in the first four days, which are built around a battery of must-pass basic physical fitness tests. That means lots of "ups:" push-ups, sit-ups, chin-ups, and up at 3 a.m. to navigate by compass solo through bogs and thick underbrush.

It peaks with a 12-mile march under heavy packs that has to be finished in three hours.

Ranger training replicates the pressures of combat. And it's a kind of human pressure cooker.

"We yell at 'em to create that stress they're going to have in combat... because no one has a quiet conversation in combat," says Sgt. First Class Travis Pheanis, a long-time Ranger instructor. 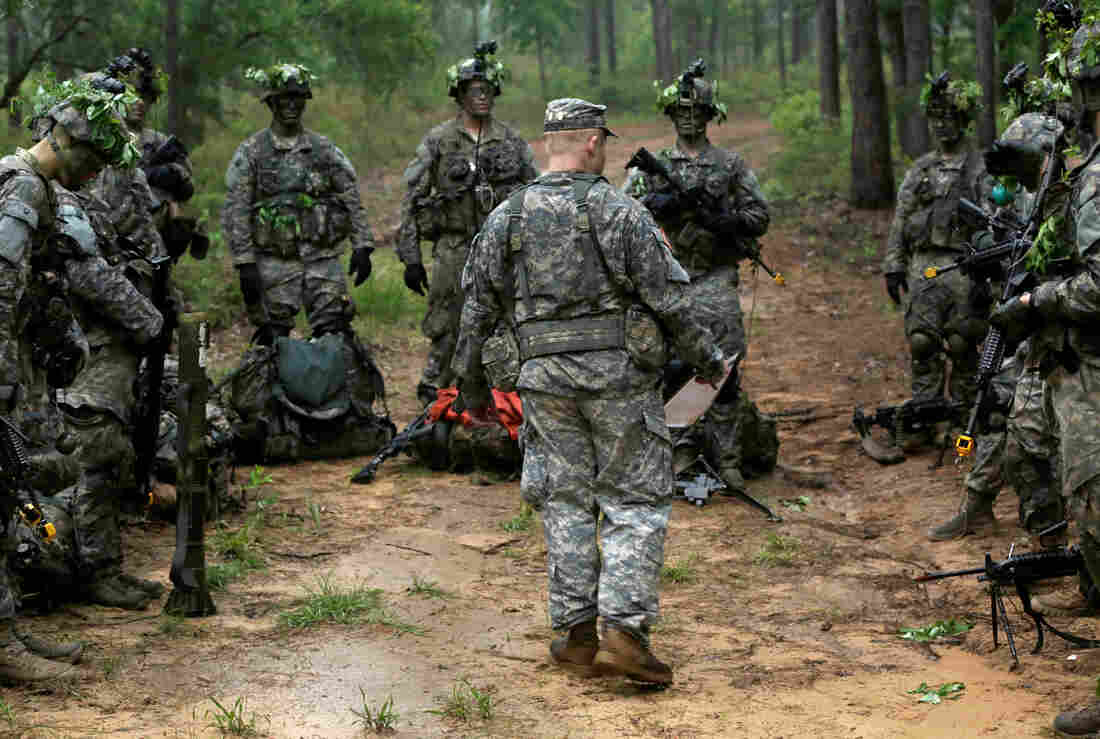 The students are kept moving, kept awake, and kept hungry. They get about three and a half hours of sleep a day, and so little food that even men in great shape typically lose 15 to 20 pounds.

By the final phase of the training — after the basic push-ups, sit-ups and zip-line, and after working on small unit tactics — the soldiers are sent to a Florida swamp, so exhausted that many are no longer sure what's real.

"Everybody hallucinates. I don't think there is one Ranger student who can tell you they didn't have one time where they saw something that was not there," Pheanis says. "I watched guys go up an escalator in the middle of a swamp. But then I blink four times and laughed it off. The problem is some guys take what their eyes see as the gospel."

The decision to let women try Ranger school triggered an outcry from some retired and active-duty Rangers. Inevitably, they say the school's harsh standards will have to be lowered to accommodate the female troops.

Critics also complain women are taking hard-to-get student slots that should go to men. Here at Fort Benning, the trainers don't have time to focus on the criticism.

Maj. John Vickery runs the land navigation test as part of the Ranger course. When asked about the idea of women as Rangers, he says:

But Vickery says passing a training course — no matter how tough — isn't the same as leading a unit in combat.

"Putting a woman in a small outpost in Afghanistan with 30 males, I think may pose some significant challenges that the Army would really have to work through to make sure that that's ok," he says.

The women still have to get through the Ranger Course. The land navigation is one of the toughest parts of the first week. Half of the exercise is in darkness, and all of it is in heavy underbrush infested with several kinds of venomous snakes, fire ants and wild boars.

For those who make it through those first days, the odds improve sharply. They're moving to phases where the challenges are as much mental as they are physical. 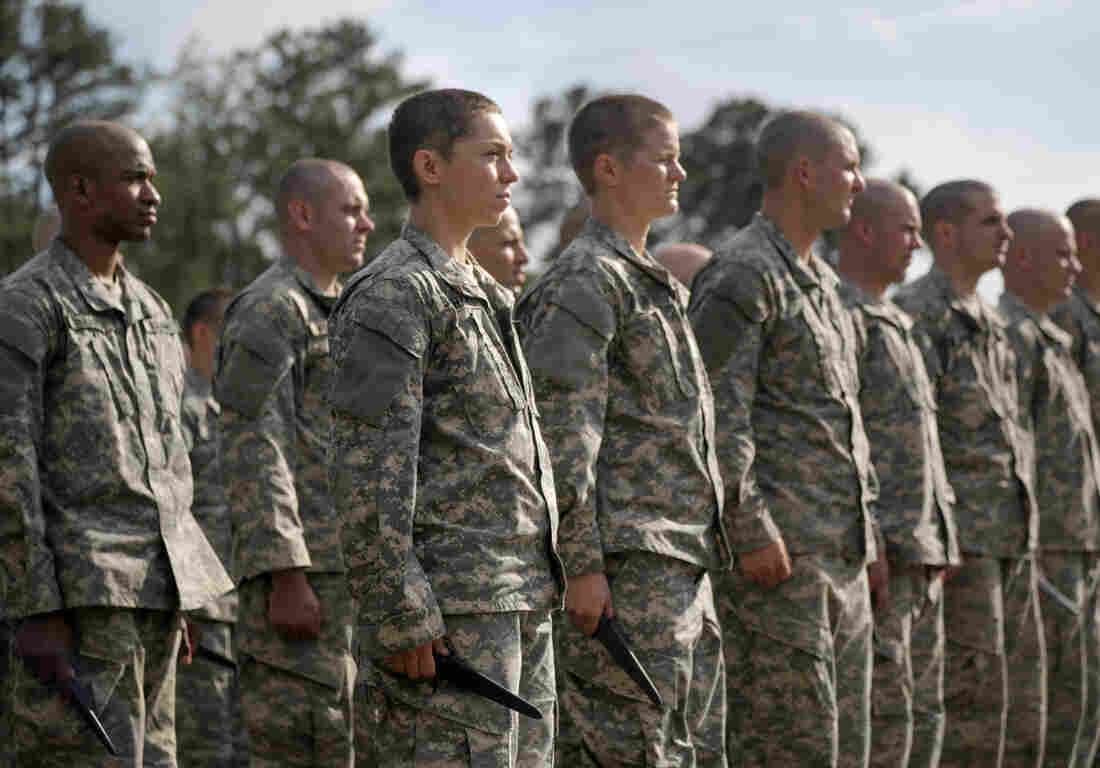 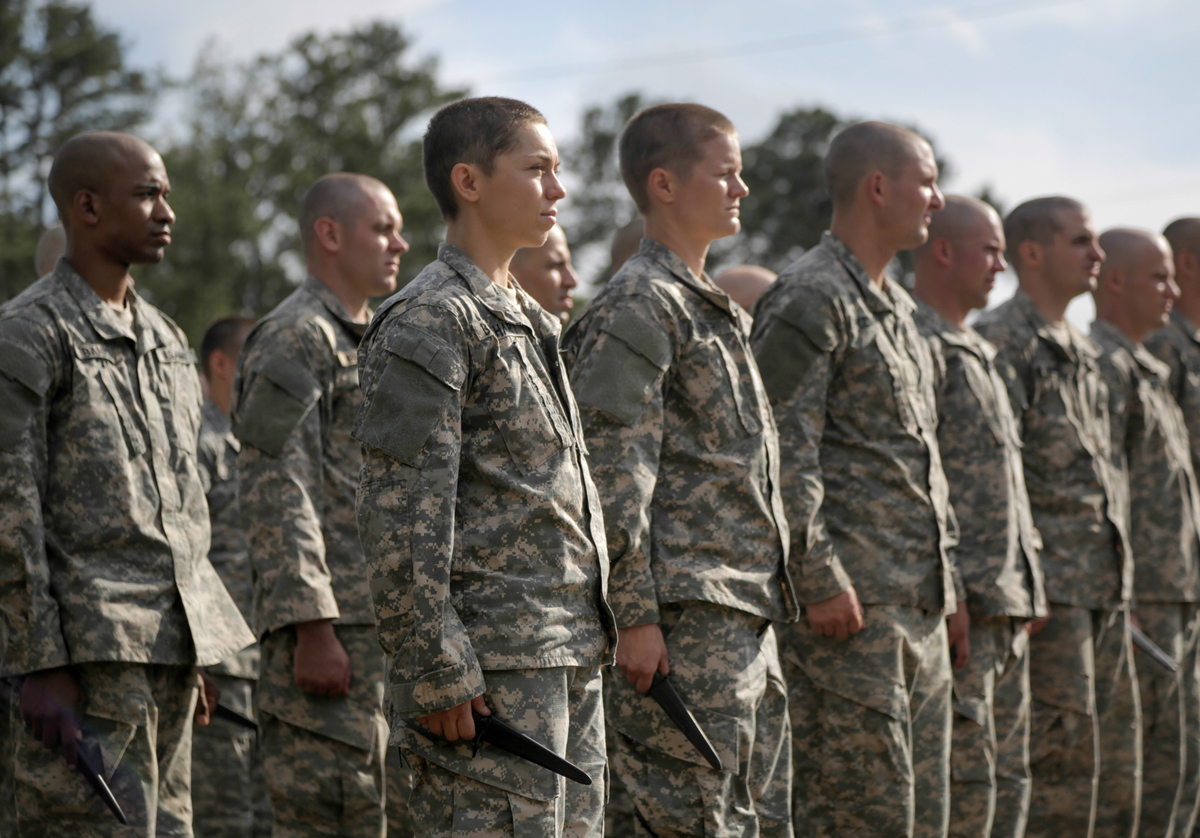 As Ross, the female observer, watches the soldiers trickle in from the woods, she says the women she's seeing aren't worried about whether they're making history. They're in the moment.

"They're soldiers, that's their primary task," she says. "If you tell them to do something they're going to do it. Male, female, it doesn't matter."

The Army is gathering lots of data during the experiment, like how many women manage to crank out 49 push-ups in two minutes. But the Army thinks Ranger School will also reveal things that can't be measured, like how women will take on leadership roles under the stress of combat.

As the navigation exercise ends, the leaders make sure everyone made it out of the woods. This time a woman is among the first to finish.

She's filling her canteen at a water truck when another jogs past on the way to report in and pats her shoulder. They exchange a quick smile that simply says: "still here."

Of the 19 women who started the course, eight are still in — a dropout rate not too different from the men.

The remaining women who didn't initially pass the first major phase of the training, which focuses on small-unit operations, had to try again.

That's not unusual. Only about 25 percent of men who graduate from Ranger School make it without "recycling" at least one of the three phases. But each do-over adds more weeks of hunger and fatigue, making it increasingly difficult to pass.

Officials at Fort Benning are expected to release an update on the women's status as soon as this week.