Accessibility links
Fat Is Not A Four-Letter Word In 'Dietland' There are different kinds of fat people in literature — funny or comforting, sometimes despicable. But Sarai Walker's Dietland gives us a new fat protagonist — complex, compelling and dangerous.

Fat Is Not A Four-Letter Word In 'Dietland'

Fat Is Not A Four-Letter Word In 'Dietland' 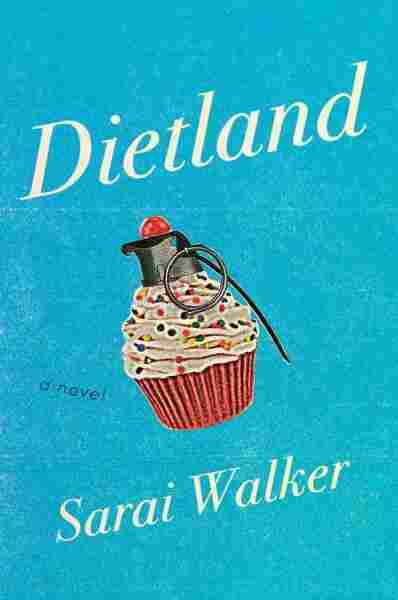 Editor's note: A Dietland quote in this review contains language some may find offensive.

In fiction, there are the Good Fats (Clara Peggotty, Mrs. Weasley and various other pillowy matrons) and the Bad Fats (Ursula, Augustus Gloop, assorted despicable characters whose fatness is shorthand for moral decay). Oh, and the Funny Fats. Don't forget the Funny Fats (Falstaff and his schlubby ilk). But complicated, dangerous, compelling Fats? These are rare.

Plum Kettle is one such Fat. She's around 300 pounds, and she's waiting for her "real life" to start: A life when she will be thin, beautiful and confident. She has a closet full of beautiful too-small clothes she orders for her future self. She is saving up for weight-loss surgery, lest she "stay a before picture forever."

Her life is small. She goes between her apartment and the coffee shop where she works responding to letters from teenage girls to the editor of a women's magazine. She eats "Waist-Watchers" meals from the freezer and calls her mother. It all changes when a strange girl in neon tights starts following her; soon she is pulled into a circle of radical feminist women who teach her self-acceptance, and she learns, for the first time, to be OK with being fat.

The word fat has a kind of wonderful concussive force; it seems powerful and self-announcing. Overweight carries clinical contempt — it is dressed in a white coat and detached frown. Obese has a kind of sinister ooze: it hisses. The euphemisms — zaftig, corpulent, husky, rotund -- have a kind of prim now-how-do-I-put-this-nicely lip-purse built in. The best you can hope for is harmless, maternal, sexless plump.

"It felt good to say the word fat," Plum decides. "I had also avoided it, but it had the same thrust as f*** and the same power — an illicit f-word, the top teeth digging into the bottom lip, spewing the single syllable: fat."

But the novel doesn't rest with a predictable message of sugary self-acceptance: Dietland swerves suddenly and powerfully from chick lit to revenge fantasy. At the same time Plum is learning to love herself, a terrorist organization known only as "Jennifer" is dealing vigilante justice to misogynists. Rapists are dropped out of helicopters. Magazines are threatened with destruction unless they replace images of naked women with naked men; when one newspaper CEO doesn't comply, her twin brother's scalp is delivered to her in the mail. Jennifer becomes a movement: When a fraternity's pledges march around a college campus chanting No means yes, Yes means anal — a moment ripped from the headlines -- women burn down the frat house. And when Plum's friend in Technicolor tights starts appearing on Wanted posters, she realizes she may be caught up in something more than she thinks.

I've never dropped anyone out of a helicopter. But Dietland resonated with the part of me that wants, just once, to deck a street harasser. At the very least, I wish an incurable itch upon everyone who has catcalled me on the street. I wish food poisoning and public embarrassment on everyone I've heard make a rape joke. I wish toothache and head lice and too-small shoes upon every stranger who has told me to smile. Which is to say, sometimes I forget I'm angry, but I am. Dietland is a complicated, thoughtful and powerful expression of that same anger.

Read an excerpt of Dietland