Accessibility links
In A Digital Chapter, Paper Notebooks Are As Relevant As Ever Is paper just a curiosity of the nostalgic? It turns out that digital natives think paper works in tandem with our devices. Research agrees that old-school note taking offers benefits a screen can't. 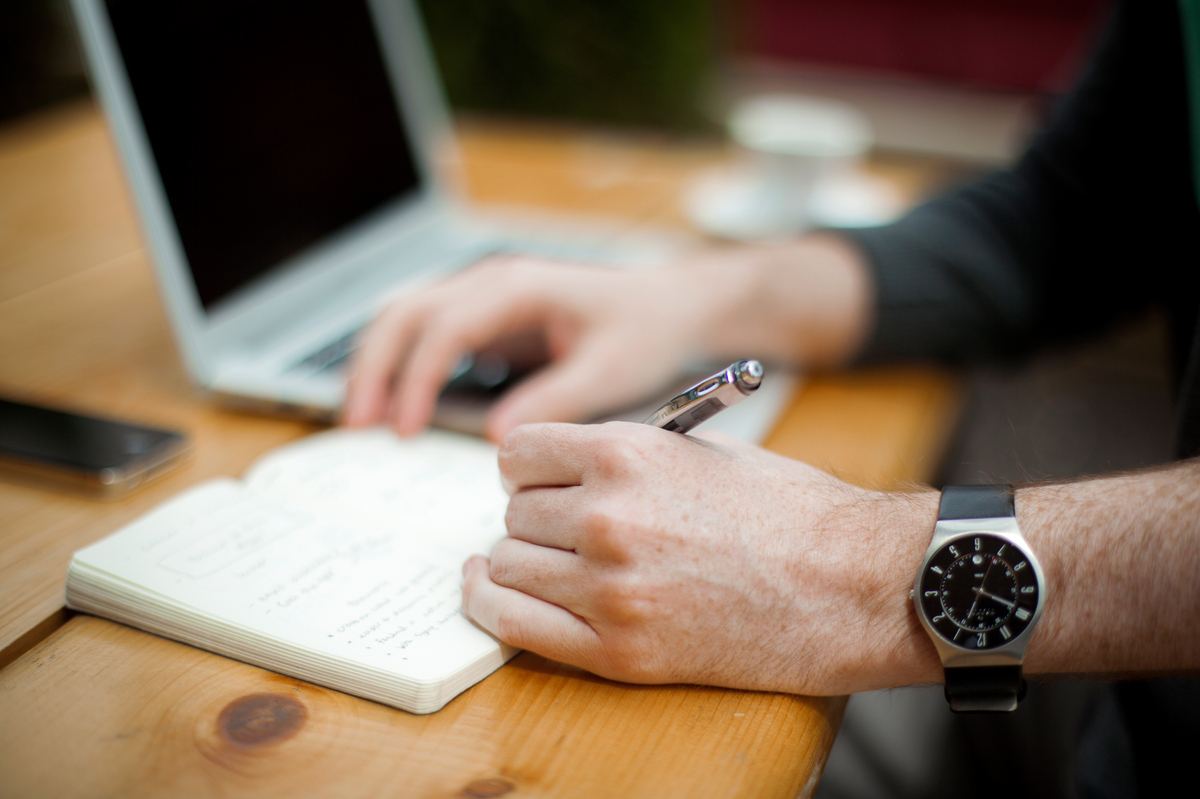 Paper can make the abstract tangible in a way that digital devices don't.

I confess. I'm a notebook nut. I own dozens and dozens of them. Everything from cheap reporter's notebooks to hand-crafted Italian leather beauties.

I wondered: Am I an analog dinosaur, or are there others out there like me?

The first stop in my investigation was, frankly, discouraging.

At first glance, a Starbucks on the campus of George Washington University points to the dinosaur conclusion. So plentiful are the laptops and tablets that they outnumber the double-mocha-half-caf-triple-shot-Frappuccinos.

But when I look more closely, I spot plenty of paper here as well.

"The stuff that really matters goes onto the paper," he says.

Not just any paper. He uses a small black notebook with an elastic band and a storied past. Picasso and Hemingway used an early version of the Moleskine, and now you can, too. 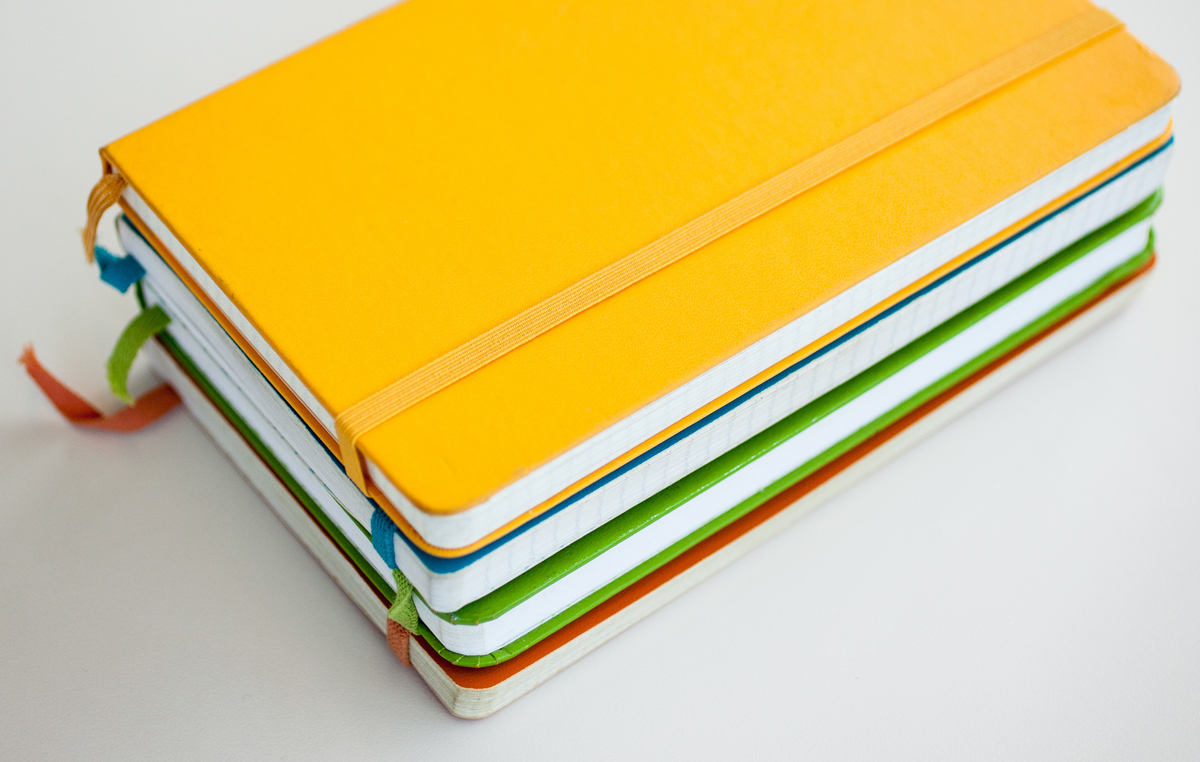 Moleskine notebooks have grown in popularity.

Oddly enough, the analog company's success has grown in tandem with the digital revolution. In fact, when conducting market research, the company detected something even more perplexing: a direct correlation between sales of its little black notebooks and proximity to an Apple store.

That led Moleskine CEO Arrigo Berni to conclude that his customers are "not people who are clinging to paper with a nostalgic feeling, but rather people that have both digital and analog as part of their lives."

Yes, he says, we live in an increasingly digital world, but we "still have a need for physical experience, for emotional experiences that digital devices and technology" don't always provide.

The Technology Of Books Has Changed, But Bookstores Are Hanging In

Besides, he adds, for so-called digital natives, iPhones and other high-tech gadgets are commonplace. Paper is the curiosity.

Not that long ago, she found herself adrift, professionally and emotionally, so she sought out a planner, a paper planner. None felt quite right so she designed her own.

Smelling a business opportunity, she turned to Kickstarter to get funding. In one of her campaigns, she was aiming for $10,000; she raised more than half a million.

"We went viral for a whole week, and it was insane," she says.

Friends urged her to launch a digital version of her planner, but she resisted.

She has nothing against apps — her smartphone is chockablock with them — but she finds paper more intimate.

"It's this thing that is so intuitive. It's between you and paper and a pen. It's kind of meditative," she says. "When I'm on the phone, it's never meditative. It's always task-y."

"I feel there's a huge need for paper in this increasingly digital world," she adds. "I look at my planner and I think of it as my second brain. I look back at something on there and it's like, 'Oh, I wrote that.' "

I know what she means. As a writer, no work feels complete until I hit the print button and it's on paper. Maybe, though, Angelia and I are both dinosaurs, albeit from different generations.

But some recent research suggests otherwise. Pam Mueller was a teaching assistant for an introductory psychology class at UCLA. One day, she forgot to bring her laptop to class.

"So I took notes, you know, the old-fashioned way, the way I did in college — pen and paper," she explains. "I thought I got so much more out of the lecture that day."

She mentioned this to her professor, Daniel Oppenheimer. It turns out that he had a similar experience in a faculty meeting. He was dutifully taking notes on his laptop but realized he had no idea what people were saying.

Oppenheimer and Mueller wondered if there was something about paper and the act of writing that explained this phenomenon, so they conducted an experiment.

They asked about 50 students to attend a lecture. Half took notes on laptops and half with pen and paper. Both groups were then given a comprehension test.

It wasn't even close. The students who used paper scored significantly higher than those who used laptops.

Mueller attributes this unexpected finding — published in the journal, Psychological Science — to the fact that the "analog" note takers were forced to synthesize rather than merely transcribe. It's a phenomenon known as "desirable difficulty."

"Desirable difficulty is some small roadblock that is in your path that actually improves your understanding of a topic," she explains.

This is, admittedly, a hard sell on college campuses, she concedes.

"Students find it hard to believe that more content isn't better," she adds, "that they aren't going to just get it all down now and study it later."

Mueller, though, has taken her research findings to heart. Whenever she needs to truly grasp a subject, she ditches the laptop and takes notes with old-fashioned pen and paper.