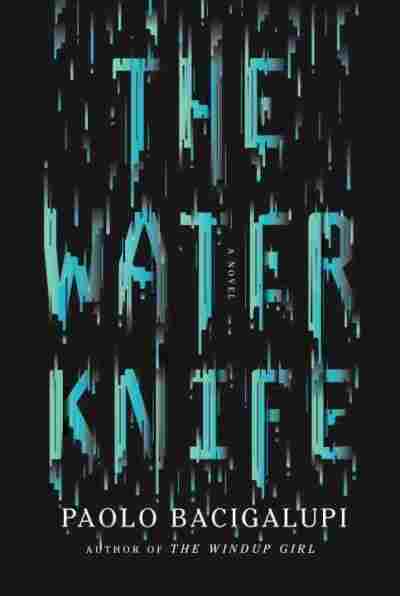 In The Windup Girl, Paolo Bacigalupi's best-selling, Hugo- and Nebula-winning debut, the author imagines a 23rd century in which the forces of commerce have run amok over the basic, biological building blocks of life. In his equally powerful sophomore novel, The Water Knife, he takes a similar approach to an inorganic substance without which human life wouldn't exist: H2O. But where The Windup Girl takes place hundreds of years from now in Southeast Asia, The Water Knife hits closer to home for U.S. readers. Its setting is the American Southwest, at a time in the near future when Britney Spears is toothless and old, the country is plagued by climactic calamities and the Southwest's dwindling water supply is controlled by robber barons.

A toothless Britney Spears, believe it or not, is the least chilling thing about The Water Knife — although "chilling" might be the wrong word for Bacigalupi's speculative vision of Arizona. Hit by "Big Daddy Drought," a perpetual catastrophe that has become the horrifying new normal, the Grand Canyon State is the new American dust bowl — or sand bowl, if you will — where refugees crowd the ghettos of suburban Phoenix and rapacious "coyotes" smuggle people not from Mexico to the U.S., as they do now, but from Arizona to California.

The federal government has been severely weakened by corporate influence; the drought-stricken Western states have formed their own militias and shut down their borders. In the midst of this poverty and tragedy, though, massive resorts are being constructed across the parched landscape, ones that flaunt their water-wealth in the face of exploited workers and gross ecological disparity.

When Angel is ordered to travel to Phoenix as part of an SNWA investigation into a possible new water source, he crosses paths with Lucy, who's probing the mysterious murder of her idealistic friend Jamie. In the middle of all this is Maria Villarosa, a young Texan refugee who gets caught up in a storm of violence, drugs, prostitution, torn loyalties and secret water rights that could dramatically shift the balance of power — as well as the quality of life — everywhere west of the Rockies.

Bacigalupi plays on a grand scale, but he does so with a keen eye for detail, from the designer dust masks worn by the rich to the "construction printers" used on an industrial scale — like giant 3-D printers — for the building of SNWA's super-resorts. His big triumph, though, is never forgetting that The Water Knife is a thriller at its pounding heart. Even amid reams of deeply researched information about the economy, geology, history and politics of water rights and usage in the U.S., he keeps the plot taut and the dialogue slashing.

The story is steeped in ethical debates about humankind and its obligation to the planet that nurtures it, but Bacigalupi paints his characters in shifting shades of moral gray that are no less sharp because of it. That's not to say that the The Water Knife doesn't have a clear message, or that Bacigalupi isn't an unabashedly activist author. But his case is so dramatically compelling — and so terrifyingly substantiated — that the book never feels like a sermon. The focus, rather, is on the people who are at the losing end of The Water Knife's trickle-down dystopia, and how deregulation, privatization and the concentration of power in the hands of the few might take strange new shapes in the coming decades.

Bacigalupi is raising bigger questions, too, about what happens when a shrinking federal government leaves a vacuum in its wake, and what kinds of things rush in to fill that void. "This was the true apocalypse. The world after all the rules had stopped existing," Lucy realizes as she reaches a point of no return. That realization could also serve as The Water Knife's alarming, mobilizing bottom line.

Read an excerpt of The Water Knife