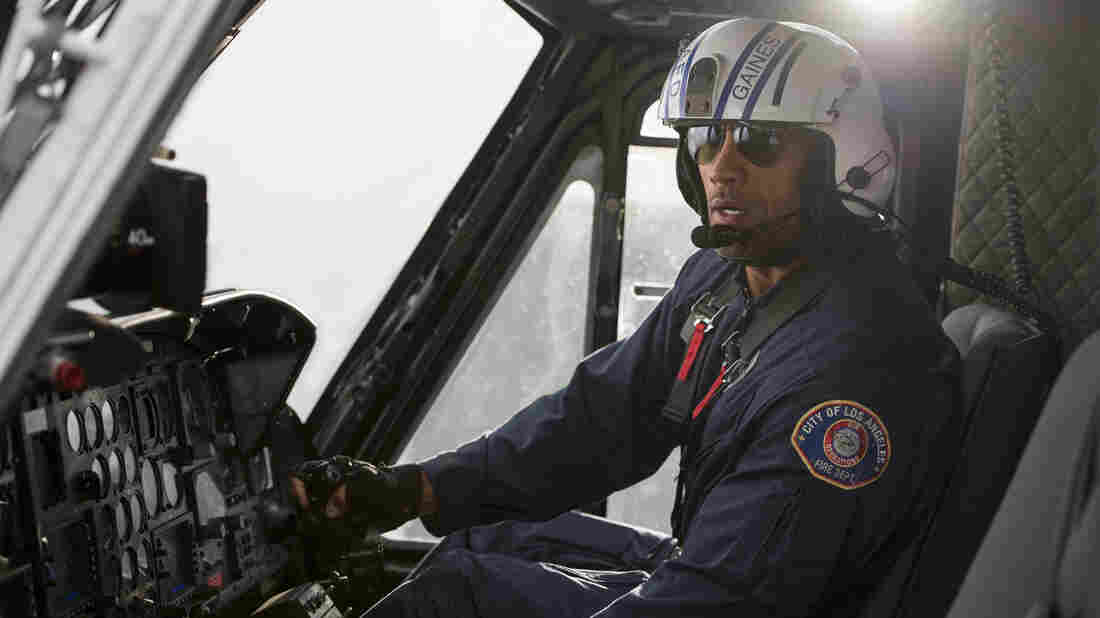 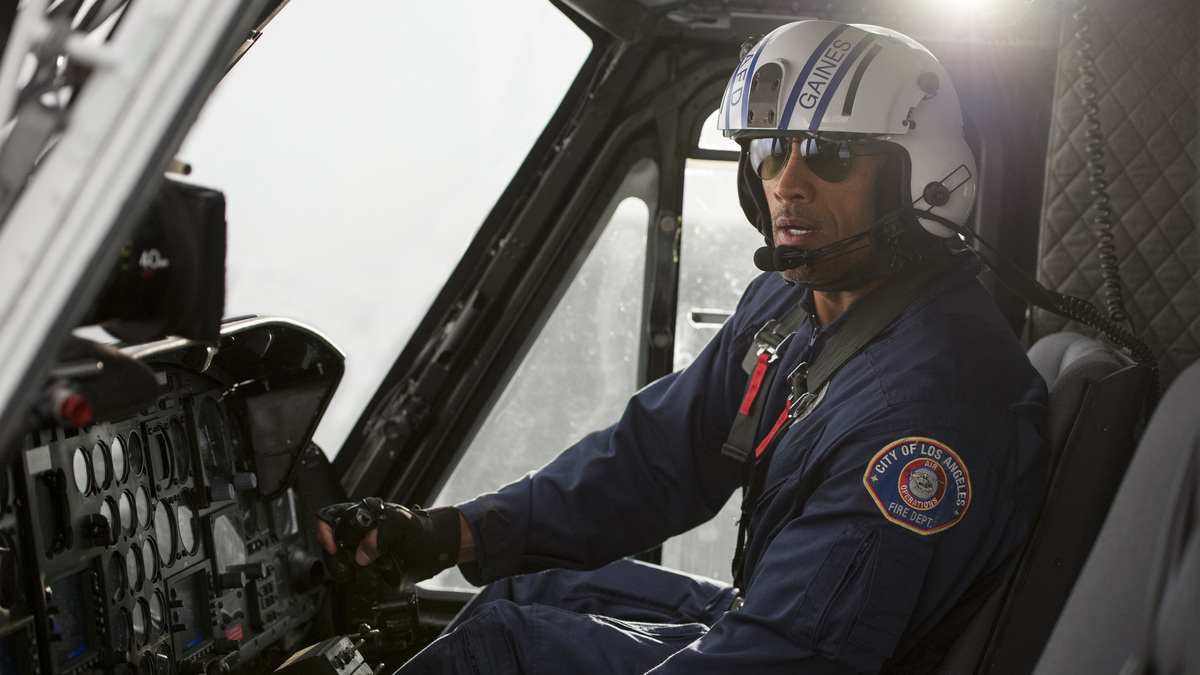 In the Universal Pictures release Earthquake, one of the biggest hits (no pun intended) of 1974, The Big One takes a big bite out of Los Angeles — God's vengeance, the film implies, for Charlton Heston cheating on Ava Gardner with Genevieve Bujold. You could expect Moses to be held to a higher ethical standard than the rest of the picture's all-star cast, which included George Kennedy, Victoria Principal, Richard Roundtree as a "daredevil motorcyclist" and Walter Matthau as a character identified only as "Drunk." The film was the first to be released in Sensurround, designed to use low frequencies to create a rumble from the back of the theater. In his favorable New York Times review, Vincent Canby said the gimmick "acts on the eardrums like thousands of angry Magic Fingers." Sensurround probably felt like a bigger deal 40 years ago than the familiar, weightless ka-blammo of San Andreas does now.

But the audience that will pay $14 to see the Hollywood sign tip over again, and the Golden Gate Bridge once more sundered like a bag of Twizzlers ripped open by Dwayne "The Rock" Johnson, regenerates every six or seven years; just enough time for an incremental upgrade in computer animation. And that's pretty much the calculus behind the new Universal Pictures release San Andreas: The Rock vs. falling rocks, which sometimes seem like they're really there but just as often don't. Helo-flown and hella-dumb, the movie delivers what its ads promise and not a particle more: Semi-convincing digital erasure of infrastructure. Extremely persuasive bone structure. On the summer movie Richter scale, it's a 5.0, grading generously.

Johnson, operating in Stoic Mode here, by which I guess I mean that at no point does he lip sync "Shake It Off" despite the undeniable synergy of movie and song, plays a Los Angeles Fire Department chopper pilot — a gig in which it would seem that standing 6-foot-5 and weighing a lean-beef 260 pounds would be more a hindrance than an advantage. On this fateful day, he's just received his divorce papers from Carla Gugino. (Every action hero needs a failed or foundering marriage unless he's a widower.)

I note with approval that Johnson and Gugino are the same age in real life, which makes her a cradle robber in Hollywood casting terms. Their college-kid daughter is played by Alexandra Daddario, the True Detective supporting player whose face was at the top of all those blog posts about HBO's alleged nudity mandate last year. (She and everyone else stays decent here, albeit, in the finale, soaking wet.) Daddario is only 14 years younger than her movie-parents but manages to pass, thanks to the same acting powers by which she convinces us she's in the same frame as the crumbling Transamerica Pyramid.

Just look at this trio, with their eerily symmetrical mugs. No one ever utters the word "eugenics" in San Andreas, but it's clearly set in an alternate-universe Golden State where selective breeding regulations have been in force for some time. Q: Who in this movie wasn't cast for their beauty? A: Only perhaps Paul Giamatti, who presumably got a genius deferment. He plays a Caltech seismologist who, in the wake of a surprise disaster, rigs up a pirate TV signal so he can warn the citizens of the state Gov. Schwarzenegger used to refer to as Cal-EE-for-KNEE-uh to expect a second, even more devastating strike. "They will feel this on the East Coast," he says, and it's not a pickup line. Even though every last one of his students and fellow researchers are — would you believe? — ridiculously hot.

The film has other dialogue, too; mostly minor variations on the classics "We gotta go!" and "Get dowwwwwwn!" and "DOWWWWWWWNNNNN!" But there is also the more somber and exotic, "It was my idea to take Mallory rafting that day," because every action hero also must be haunted by The One He Couldn't Save.

Subtext? None. Foreshadowing? Hey, do you like movies or don't you? This is a film wherein a scientist rejoices that he has figured out how to predict earthquakes no more than 60 seconds before an earthquake makes him pay the ultimate price for his hubris. Predict that, Poindexter! it almost says. Then it crumples the Hoover Dam, the first of many landmarks to be digitally struck from the landscape.

It's too bad that first act of playfulness vanishes once the buildings start coming down. The makers of San Andreas have heard your complaints about the callous city-destroying in Man of Steel and Star Trek into Darkness two summers ago, and responded by leveling two cities, LA and then, for the finale, San Francisco.

More astute specimens of the disaster-survival genre — the Steven Spielberg War of the Worlds from a decade ago; last year's Gareth Edwards-directed Godzilla — evince some moral awareness of the massive death toll they imply, while still being massively entertaining. San Andreas is closer to the cheerful style of Roland Emmerich, the German filmmaker who came to Hollywood and then razed it three times: in Independence Day, The Day After Tomorrow and 2012. What San Andreas has in common with Emmerich's megadeath megahits is its conviction that though mostly-unseen millions perish, if the half-dozen people we're following pull through it counts as a happy ending.

Costing a thrifty-for-its scale $100 million and clocking in at under two hours, San Andreas hasn't time or money for the subplots and oddball supporting players that make even (other) middling disaster flicks so hard to turn off. There's no cocky-but-supersmart Jeff Goldblum type. No wingnut survivalist Tim Robbins. No President Morgan Freeman. Bland and efficient, it comes to us from Canadian Brad Peyton, who previously teamed with Johnson on Journey 2: The Mysterious Island and also made Cats & Dogs: The Revenge of Kitty Galore, which sounds like even its title was neutered. (The voice of Kitty Galore was one Bette Midler, a performer not known for prudishness.)

So through austerity budgeting or by design, San Andreas is a star vehicle. Johnson, dialing down his Furious 7 arm-cast popping swagger, is a calming presence, his manner as implacable and mountainous as his cod-fed physique. Whether or not it counts as a great performance, he has that Zen fearlessness Keanu Reeves had in Speed. One day he'll have it in a better movie.

Introduced via a thrilling cliffside chopper rescue, he brings the opening line, "Just doing my job, Ma'am." Only he can't make that claim for long, because the first time he glances down from the cockpit and casually notices a freeway overpass dissolving into dust, he and his whirlybird go AWOL to save Gugino and then Daddario, who's up in San Francisco with Mom's rich land-developer boyfriend. (The movie encourages us to bay for his blood, then only kinda-sorta delivers.)

This rank dereliction of duty by a fire and rescue chief during LA's darkest hour might make for gripping drama, if the movie took even the slightest notice that its hero — a decorated Army veteran, we're told — is committing a huge crime, the kind that gets you court martialed and jailed and/or dishonorably discharged from the service. Look, you can't count on the government in a crisis, especially if we assume that every government employee who can swing it is going to steal a helicopter and go take care of his own.

Why these parents believe their daughter needs rescuing during this statewide emergency is unclear: She's a resourceful kid who we see has learned plenty of valuable survival skills from her soldier-turned-rescue-worker pop. The two cute British boys she hooks up with once the quake hits San Andreas' alternate-California, Asian-American-free San Francisco — Hugo Johnston-Burt and Art Parkinson as, respectively an age-appropriate beau and his kid brother, who looks and sounds like he just walked in from a production of Oliver! — take their marching orders from her. Still, Daddario finds herself in watery peril just as her folks arrive from out of town, so that Johnson can pump water from her lungs while yelling, "Don't you quit on me, Girl!"

Later, he and his soon-to-be-ex-ex-wife gaze out at the tableau of devastation while someone unfurls Old Glory from the remains of a bridge. "Now we rebuild," says The Rock. Daddario and her new boyfriend are there, too, the four of them looking ready to put their superior genetic material to work repopulating a California from which all the quitters have been washed away.

You better believe they'll make sure no busted-face Giamattis slip through this time.