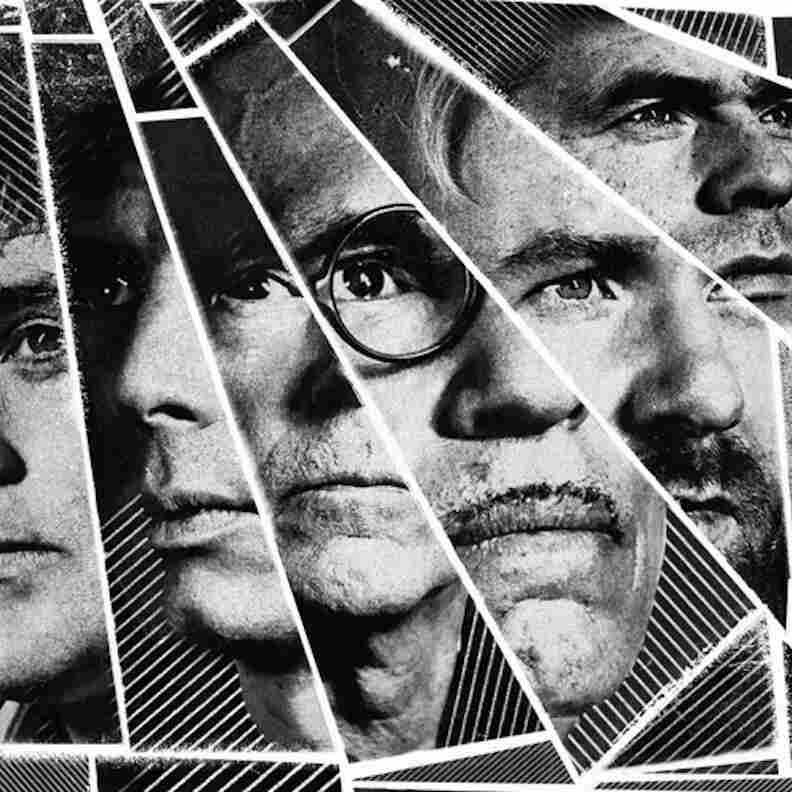 Scottish quartet Franz Ferdinand have helped steer rock in a dapper direction since 2004, when their taut and punning second single "Take Me Out" first charmed both indie and dance fans. For five decades, Sparks – band name for Los Angeles brothers Ron and Russell Mael – have achieved several cycles of European success while maintaining cult acclaim for their eclectic but always bravura art pop. Together they're FFS, a mutually flattering amalgamation that transcends limitations built into rock's hoariest cliché, the supergroup.

With FFS, the collective debut they'll release June 9, the sextet achieve more than the sum of their considerable parts while steering clear of supergroup bloat. It launches with the same florid Ron Mael piano chords that have defined Sparks since they last reinvented themselves as a classical rock duo with 2002's Lil' Beethoven. But it's Franz Ferdinand frontman Alex Kapranos who sings first on "Johnny Delusional." He's tentative but tightly focused on a beguiling female who – as is almost always the case in Sparksland – is way out of his league. On the third line, singer Russell Mael takes over at the bottom of his range before ascending to his renowned falsetto-enabled tenor as his brother and Franz swing into full force. The result retains the tension for which the Scot foursome are famous as well as the wit synonymous with Sparks, and the combination flexes and struts gracefully, fluidly, as if it had been waiting patiently to do this for years.

That's because it did. Right after Franz Ferdinand released their eponymous 2004 debut, the two bands discussed collaborating: Ron – Sparks' primary composer – even sent the Scots a new tune to potentially record together, "Piss Off," which here concludes the album, but Franz's immediate international splash rendered such plans impossible. (Full disclosure: When I profiled the group for The Herald on the eve of their first U.S. tour, I gave Kapranos an 8-track cartridge of Sparks' Propaganda; it just so happened that the singer drove an old car equipped to play it.)

Nine years later, the ensembles reconvened by chance and resumed sending material back and forth, adding to each other's contributions and separately rehearsing them for the next year and a half. When the six musicians finally intermingled in the studio, they recorded most everything as a unit so as to maximize their cohesion, and did so for only 15 days to stay spontaneous.

Accordingly, FFS is devoid of the second-rate psalms and meandering experimentation that usually pad supergroups: Neither Franz nor Sparks are those kinds of bands. Although the former's last three albums have lacked the gauntlet-throwing impact of their first, which paved ways for the Killers, Bloc Party, Arctic Monkeys, and other kindred acts, they're nothing if not consistent in their suave brutishness – a quality their finessed forefathers could never share.

Sparks may still be largely unknown beyond Europe and their native city, but their exceptionally distinctive fusion of glam-y, hammy Broadway and power-pop bombast has influenced everyone from Def Leppard to They Might Be Giants. Their 22 albums run the gamut from proto-punk to synth-driven disco, and at least half are blindingly brainy; few No. 2 U.K. chart entries pack the drollery of "This Town Ain't Big Enough for the Both of Us," the breakthrough hit for 1974's Anglo-American incarnation of Sparks. Possessing the most anxious voice in all of rock, Russell has for decades challenged gender and age conventions with his singular yelp and prancing stage presence. Whereas Ron Mael was born prematurely knowing, Russell never seems to get old. He's 66; Ron will turn 70 in August.

As FFS, Franz and the Mael men prove even more disciplined. Although each come with huge chunks of history, their collaboration is lean and contemporary, unfettered: The most Franz-like canticle, "Call Girl," features synth rumblings, processed drums, guitar scratching, and shimmering keyboards over which Kapranos and Russell croon sweetly as one, "I gave up blow and Adderall for you." Far more Sparks-esque, "Dictator's Son" tells of a fascist's spawn from "a country that's banned the rain" who vows to change the course of history but is for now far more concerned with banalities like BLTs and "coed knees."

Rhyme-intensive ditties like these are arresting, high-impact: Unlike much modern music in our attention-deficient world, FFS resists being relegated to the background; its satire is unrelenting, its riffs insistent. Favoring Kapranos over Russell in its mix, the sole ballad "Little Guy from the Suburbs" may be placid on the surface, but concerns a terrorist "who learned to kill better than the others."

The Franz foursome never falls into a supporting role, not even on the set's climactic and most spectacularly Sparks-ian cut, "Collaborations Don't Work." Even more meta than the work of their respective bands, this operatic epic alternates guitar with keyboards, Kapranos with Russell, rock with pop until the track ends with Ron's solitary piano softly repeating the melody of his refrain, "I'm gonna do it all by myself." Fortunately, FFS don't follow their own advice.