Accessibility links
Review: 'Finders Keepers,' By Stephen King Stephen King wields many pens; in Finders Keepers he's examining the role of authors and the masks they wear for the public. Critic Bethanne Patrick says the action zooms after a sluggish start. 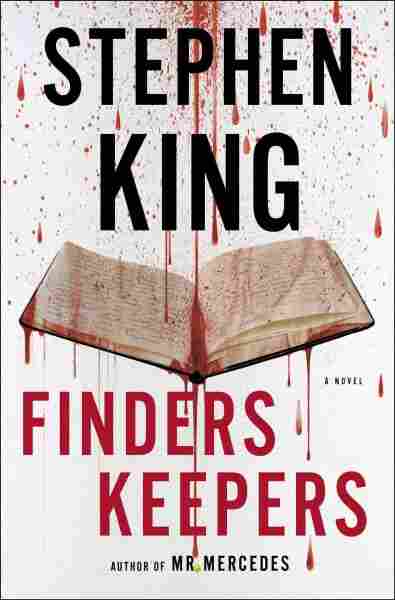 I could go on, but the King we meet in the new Finders Keepers (the second of what seems to be a trilogy starting with last year's Mr. Mercedes) is yet another man: The King of chilling writer tales like Misery, a man who's long explored the relationship between writing and madness, reading and obsession, artist and audience. In fact, one the things King chews over in this new book is the question of how many versions of an author do exist, and how those versions affect different people.

Finders Keepers picks up years after Mr. Mercedes left off: Famous novelist John Rothstein died back in the first book, and now we're following zealous Rothstein fan Morris Bellamy, and a boy named Pete Saubers. (You may find plenty of spoilers in other reviews, but not here. It isn't necessary to know all of the details in order to understand this new book, although they're given early on in Finders Keepers. If you want to be surprised, pick up Mr. Mercedes first.)

Due to an unexpected find, Saubers has become quite an expert on the late, reclusive Rothstein, whose creation and legacy must have been delicious fun for King to develop; he's a mid-20th-century literary lion in the vein of J.D. Salinger and John Updike. Rothstein's oeuvre even has Updike-esque titles: The Runner, The Runner Sees Action, and The Runner Slows Down.

When villainy threatens the Saubers family, they fortunately hit the radar of an eccentric trio (also from the first book): Ex-cop Bill Hodges, tech expert Jerome Robinson, and researcher Holly Gibney. At first, following three storylines—Bellamy's, Pete's, and the trio's—feels a little elementary, the reading equivalent of training wheels, even though the writing is as sound as ever.

Then you remember that almost everyone needs training wheels before they take off on just two. King picks up the pace almost instantaneously, and vroooooooom, there goes the action! Vroom, too, goes the consideration of what is means to be a close reader. What matters more—knowing every detail, or understanding the big picture? Can you ever hold a writer responsible for his work, or does a reader's interpretation change things?

Most important, perhaps, is the question of how we read other people. Most of the characters in this novel have their vision clouded one way or another, a mistake that can be costly. Stephen King sometimes writes complicated books about simple things (cars, baseball); here he writes a simple book about complicated ideas. And if, at first, you think Finders Keepers is meat-and-potatoes King, just wait: The dessert is really satisfying.