Accessibility links
In 'History,' Money Makes The World Go 'Round Argentinian novelist Alan Pauls' latest kicks off as so many good stories do: With a dead body and a disappearing briefcase full of cash. Critic Juan Vidal calls Pauls a "master builder" of fiction.

In 'History,' Money Makes The World Go 'Round

In 'History,' Money Makes The World Go 'Round 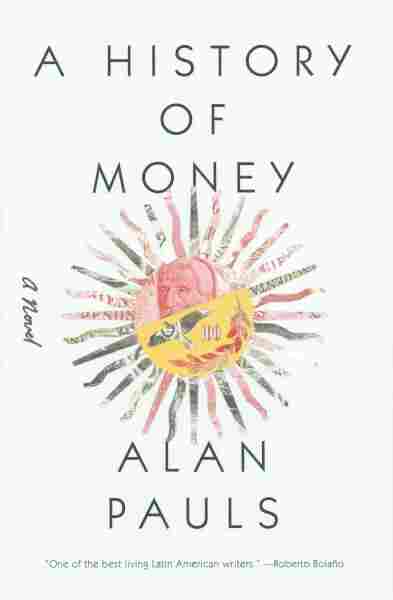 A History of Money

Money has long been notorious for its way of complicating things. We can never have too much — but most often there's just not enough. In the wrong hands, it breaks bonds and brings down kingdoms. And while it may be the commodity which ties us together as citizens of this world, it's also the thing that, because we need it so, leaves us all complicit in the end.

In The History of Money, Argentinian novelist Alan Pauls frames an absorbing and evocative tale through the lens of money and materialism. Translated by Ellie Robins, the novel delves pocketbook first into the troubled political and economic history of Argentina. As great stories often do, it begins with a body: A steel company executive, sent to deliver an attaché case full of money, who dies in a helicopter crash.

And although the body turns up after the crash, the briefcase does not. Just hours after the news is announced, police, federal agents, union thugs, and thousands of armed men are already causing a frenzy: Was this event an accident or a planned execution? And if it was an execution, who ordered it? Was the money a bribe to pay off striking workers? These are some of the questions that ultimately drive the story.

The unnamed narrator — a friend of the dead man — serves up illuminating anecdotes about his own history, not only his experience with money, but also his first experience with death:

"Our first dead bodies are like a note struck by a pianist before he begins to play, which melts away no sooner than it has been heard but lingers throughout the whole piece as a key, guiding and making sense of it; they radically and permanently alter the world as we know it, injecting it with the sole possibility — the possibility of elimination — that was unimaginable to us the second before we came face-to-face with that corpse, because it was the opposite of the world itself."

Pauls' novel is also concerned with the role money plays in everyday life. It's peopled with distracted socialite mothers, curious kids, and serial gamblers like the narrator's father, a man who always has a wad of bills within arm's reach. The father has an extreme disdain for financial institutions, is wary of bank tellers and calculators, and counts his money slowly and carefully — sometimes for the simple art of it. The fact that he always carries rolls of cash doesn't make him rich or poor, Pauls writes. Instead, "it makes him ready."

As Argentina's economy struggles, its people find it difficult to keep up. Money, like life, is a fragile and fleeting thing; above all, it's unpredictable. The narrator's philosophical ruminations on the price of survival in an emotionally (and financially) bankrupt world are striking, and occasionally downright heartbreaking. Pauls' characters, living day-to-day, make bad investments and blow money unsparingly. They spend their cash the way the author spends his words: With abandon.

Pauls once said that for him, a sentence is always a world. The History of Money proves he's interested in creating ambient, disjointed worlds, "sentences people could live in, swim, breathe, hallucinate, sink, fall asleep, run, be afraid." If there is any flaw to be found in this textured novel, it's that subclauses frequently trail off, tangling the reader in entirely different worlds than the one at hand. However, Pauls manages these worlds with expert control — and at their best, the digressions only serve to mirror the characters' anxieties. If the mark of a great novelist is to create expansive worlds which readers can inhabit freely, Pauls is a true master builder.