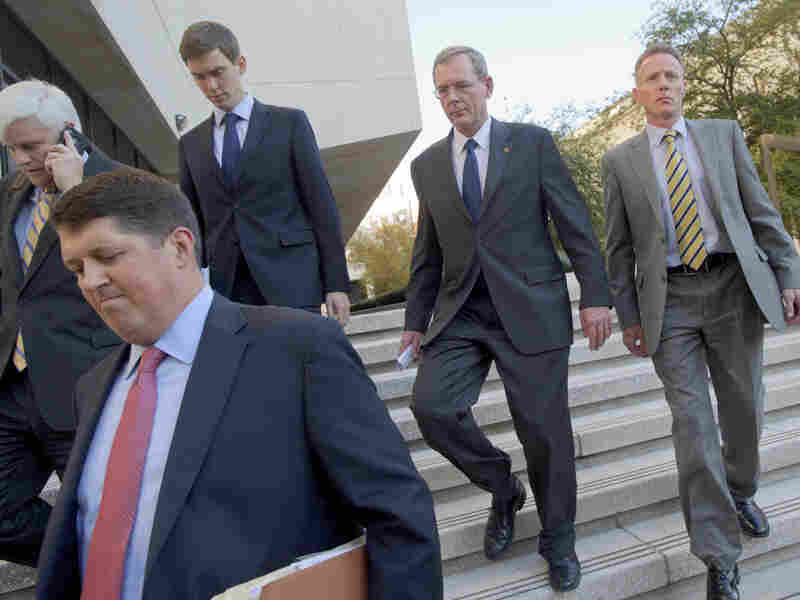 David Rainey, second from right, leaves Federal Court after being arraigned on obstruction of a federal investigation in New Orleans in 2012. Rainey was acquitted Friday. Matthew Hinton/AP hide caption 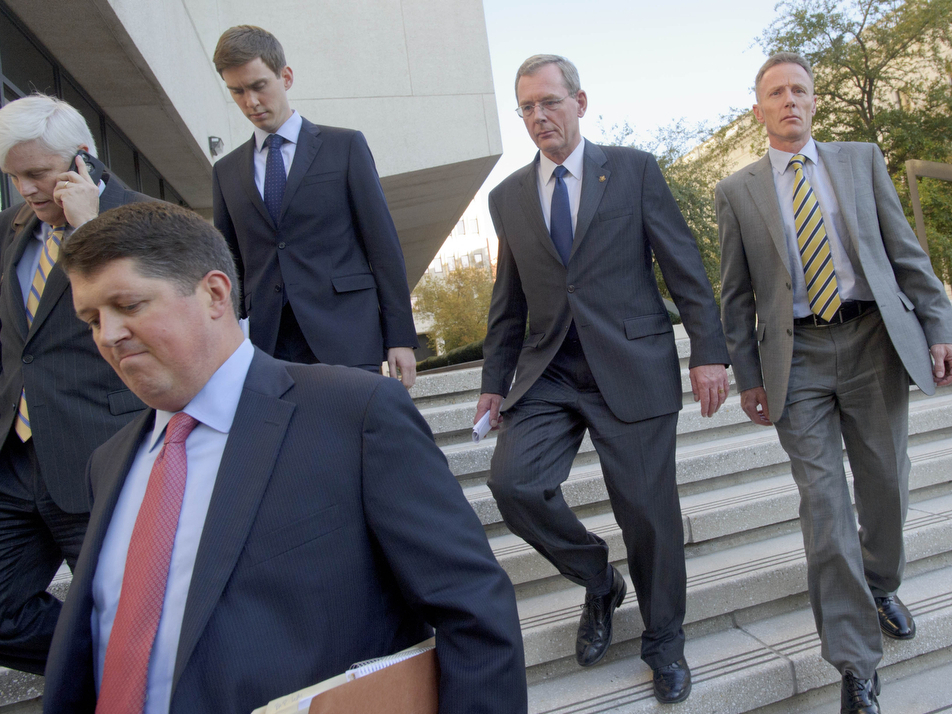 David Rainey, second from right, leaves Federal Court after being arraigned on obstruction of a federal investigation in New Orleans in 2012. Rainey was acquitted Friday.

More than two years ago, Justice Department officials held a news conference to unveil criminal charges against BP and several executives in connection with the largest oil spill in U.S. history.

But the Department of Justice task force created to hold the company and responsible individuals to account has a track record that's spotty at best.

On Friday, a federal jury in New Orleans acquitted the highest-ranking BP executive charged in connection with the 2010 Deepwater Horizon explosion, after just five days of trial.

The verdict for David Rainey, the company's former head of exploration for the Gulf of Mexico, on a false statements charge deals yet another blow to a Justice Department task force that was created to deliver a reckoning for the largest oil spill in U.S. history. The government loss this week follows two other prosecution setbacks in cases that sought to hold individual BP executives to account.

Two months ago, a federal appeals court dismissed serious criminal charges against two men on the rig at the time of the disaster. The only person who fought charges at trial and was convicted in the matter, engineer Kurt Mix, had the conviction wiped away after judges said the obstruction case against him had been infected by juror misconduct.

For his part, Rainey argued he acted in good faith and took the witness stand this week in his own defense. Rainey hugged family members, his lawyers said, but otherwise showed little emotion as the jury handed down its verdict.

"Not a strong showing for the government," defense lawyer Brian Heberlig said in a phone interview after the verdict, "But that's because they had nothing to work with. It was not the fault of the two men who tried this case. They inherited this case ... This case never should have been brought."

The prosecution had run into skepticism even before the jury decision. U.S. District Judge Kurt Englehardt tossed one of two charges Rainey faced on the first day of trial and made other rulings that limited the evidence the government was able to introduce.

Peter Carr, a spokesman for the Justice Department, said, "While we are disappointed with the verdict on the sole count the jury was permitted to consider, we respect a jury's verdict no matter the outcome."

Five years after the oil spill, the government lawyers who created and staffed the task force have long since moved on to lucrative jobs in private legal practice. But as the media devoted weeks to broadcasting live shots of oil flowing from the well and the disaster became a political crisis for the Obama administration, Justice Department officials promised a thorough and tireless investigation. Eleven men died on the rig that night, April 20, 2010.

When authorities unveiled their criminal charges two years later, Lanny Breuer, who led the criminal division at the Justice Department, said Rainey had "intentionally underestimated the amount of oil" flowing from the well and "cherry-picked pages from documents ... to make this spill appear less catastrophic than it was." Then-Attorney General Eric Holder pointed out that not only had BP agreed to plead guilty as a company, but that "individuals, individuals, have been charged."

Meanwhile, three of the men charged at BP, including Mix, the engineer who allegedly destroyed email messages about the size of the spill, still face trial.

Robert Kaluza and Donald Vidrine were initially indicted on 23 charges, including 11 counts of seaman's manslaughter. But in March, a three judge panel on the U.S. Court of Appeals for the Fifth Circuit threw out the seaman's manslaughter counts, reasoning that the two "well site leaders" were not ship officers engaged in misconduct or neglect at the time of the explosion.

That old law was originally designed to protect passengers on steamboats, who often succumbed to crashes and boiler explosions. They are scheduled for trial involuntary manslaughter charges in February, said David Gerger, a lawyer for Kaluza.