Accessibility links
Once Feared, Now Celebrated, Hudson River Cleanup Nears Its End General Electric is entering the final year of a billion-dollar cleanup of PCB-contaminated water. The project was once controversial — now, even some early critics are asking for it to be continued. 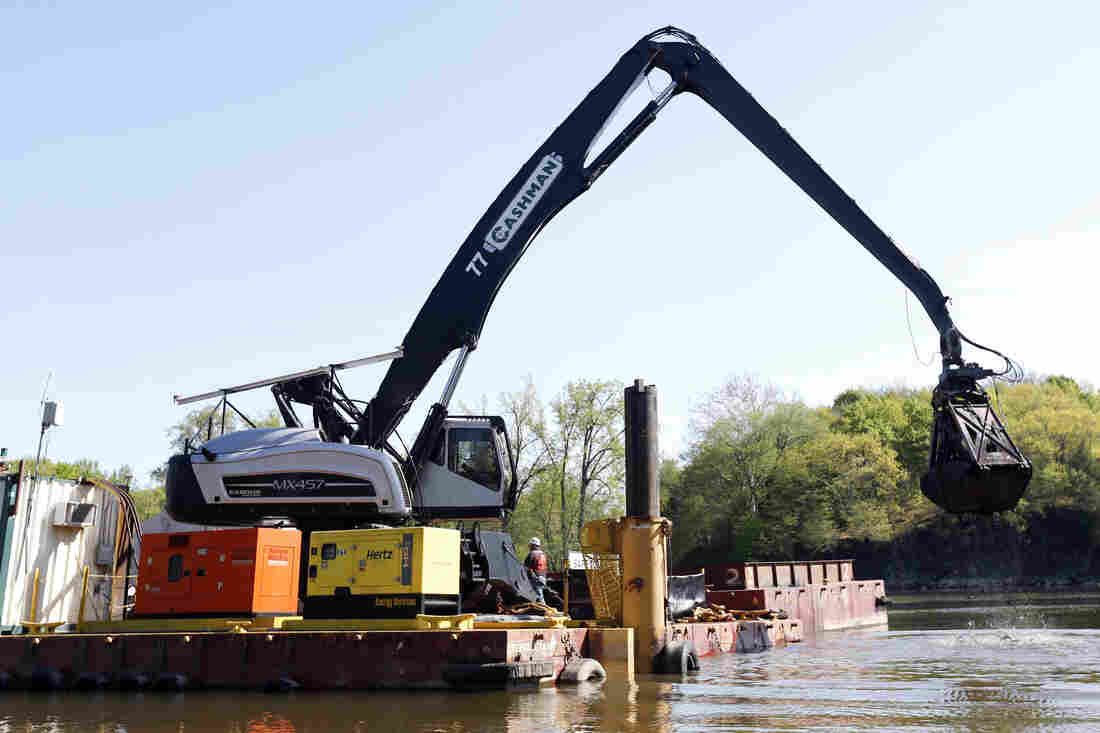 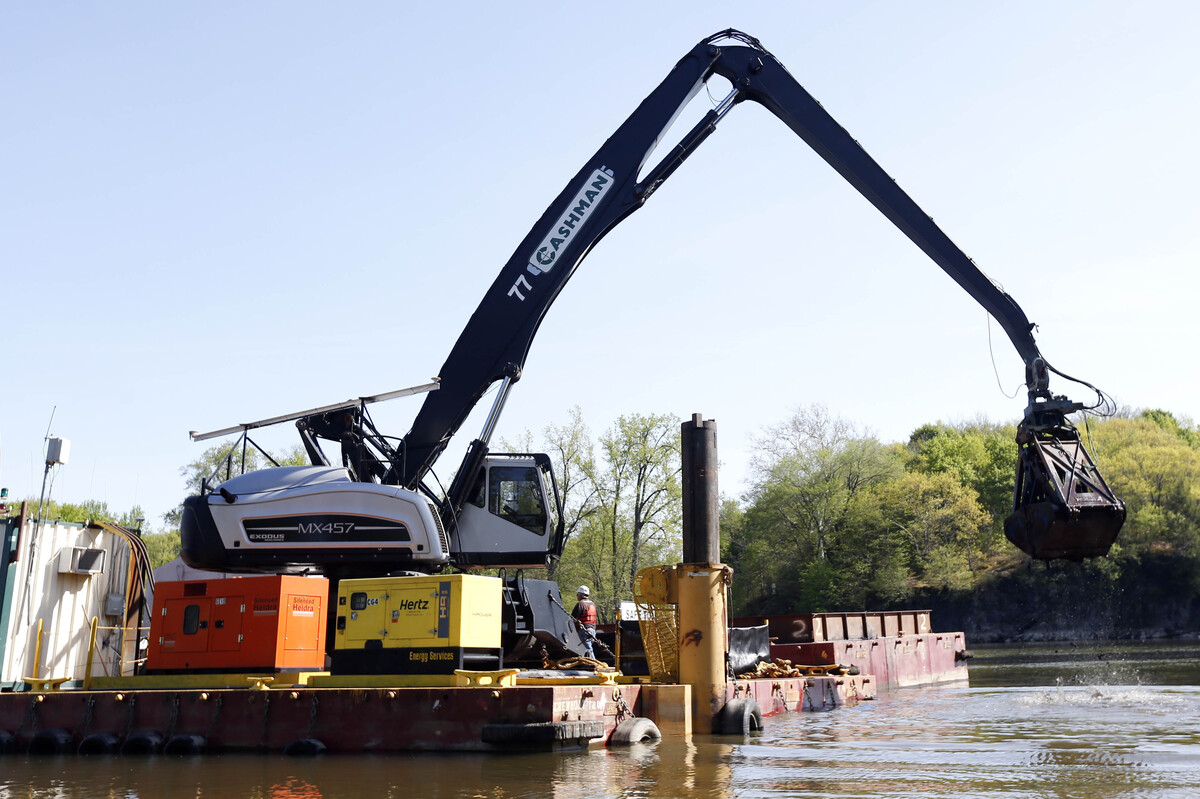 Crews perform dredging work along the upper Hudson River in Waterford, N.Y. General Electric's cleanup of PCBs discharged into the river decades ago will end this year.

For half a decade, General Electric has been paying for a massive dredging operation on the upper Hudson River in New York.

The billion-dollar cleanup, designed to remove toxic PCBs, sparked fierce controversy when it was proposed. But as the project enters its final summer, it's been so successful that even some of the cleanup's most vocal critics want it expanded.

A Symbol For Sick Rivers

Just offshore in Mechanicville, three hours north of New York City, barges shuttle back and forth across the Champlain Canal, a waterway linked to the Hudson River. A backhoe is digging up great gobs of PCB-contaminated muck.

"The good news is we're finishing the dredging and then we anticipate [that] over a decade or decades, that the fish advisories will begin to be reduced," says Gary Klawinski, director of the Environmental Protection Agency's Hudson River field office.

PCBs were once a key ingredient in GE's manufacturing of electrical components, but the substance has been linked to cancer in animals and studies have shown severe impacts on wildlife. PCBs were banned in the 1970s, but not before GE poured tons of it into these waterways from two plants along the river.

As a result, people were warned against swimming and eating the fish. The Hudson became a symbol for sick and polluted rivers nationwide.

Still, when the cleanup was first proposed, it was surprisingly controversial. With advertising, GE convinced a lot of locals in places like Mechanicville that dredging would do more harm than good.

"These wonderful moments on one of the richest rivers on Earth could be interrupted for the next 20 years, if the EPA orders the Hudson dredged," read one ad.

Those ads scared a lot of people. Ernest Martin, then mayor of the nearby town of Stillwater, N.Y., captured the mood when he spoke at a public hearing in 2001.

"I am definitely against dredging in the Hudson River," Martin said. "It will take too many years to clean it under the dredging proposal by EPA. Our future for tourism, employment, new business will be lost forever."

A National Model For Dredging

But the EPA pushed forward, requiring that GE remove roughly two-thirds of the PCBs. It was described as the largest, most complex Superfund site in U.S. history.

With active dredging now its sixth year, even the project's early critics say it's been a huge success.

"We did have reservations about this project, as did many others," says Mark Behan, a spokesman for GE. "Because at the time that it was conceived, no project of this size or complexity had ever been attempted before."

Behan says the company is now proud of its work here, developing new techniques to remove toxic silt from a vast river that changes from season to season.

"We assembled a world-class team of dredging, environmental and engineering experts, we adapted technology to the task and we've produced a project that EPA now calls a national model," Behan says.

Now towns along New York's upper Hudson have begun revitalizing these old industrial waterfronts, thinking about a future where kids can swim and play along the shore without fear of contamination.

"I remember when this all started the predictions were it was going to have a major impact on all communities," says Mark Sever, who works for the city of Mechanicville. "So I guess, we're pleasantly surprised."

Calls For An Expansion

The dredging has gone so well that a lot of local leaders here have pivoted completely. More than 50 towns and counties are now calling on GE to keep working until all of the PCBs are scooped up.

EPA officials haven't endorsed that idea. They say they're satisfied that enough PCBs have been removed that the Hudson can begin healing. GE's Behan says the company has done enough.

"For years, there have been voices who have said they wanted a different project, a larger project, a smaller project, but EPA is the decision-maker," he says. "EPA ordered the dredging project, and GE executed that project, and I think did so exceptionally well."

But a separate coalition of state and federal agencies — not including the EPA — has been studying the impact of PCBs on Hudson River wildlife. They've signaled that they may push GE to dredge contaminated sites not included on the EPA's list.