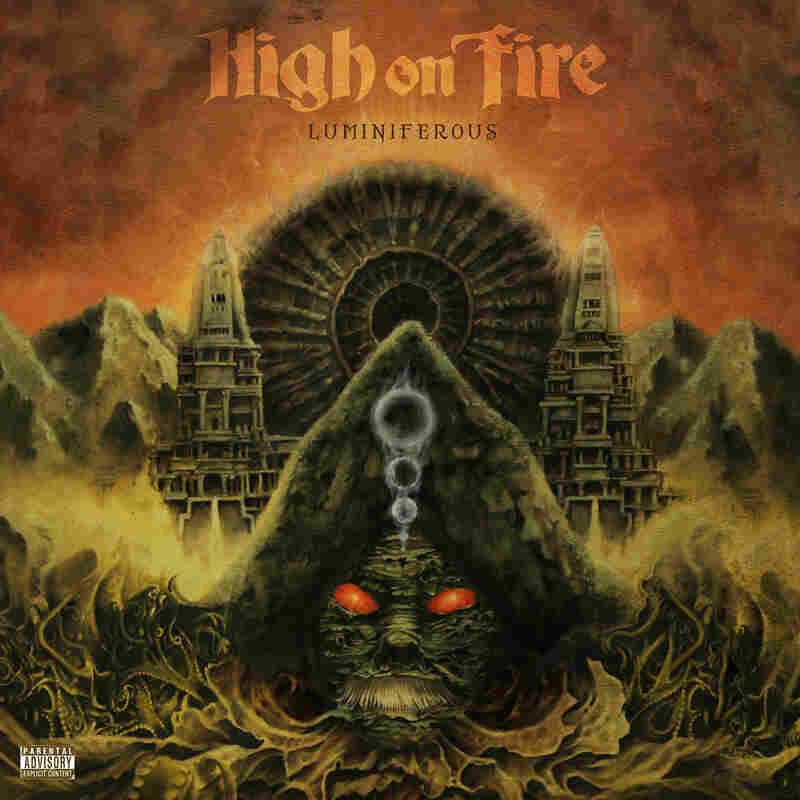 Consistency, even sameness, is part of the affable appeal of the classic metal an entire generation grew up with — and whose influence still looms 30 years later. The metal loaded with fantasy lyrics, towering riffs and screaming leads. The metal of scruffy denim vests, of greasy hair, of those hidden enclaves at high school that reeked of stale tobacco and weed. The metal people in their 40s still crave, yet don't know how to find amid so much extremity in the genre.

At 43, Matt Pike is the walking embodiment of heavy metal, and his band High On Fire — formed in the wake of the seminal '90s doom outfit Sleep — revels in metal tradition. The boundaries Pike, drummer Des Kensel and bassist Jeff Matz set for themselves are narrow and rigid, which can invite a risk of self-plagiarization. But at their best, they achieve unique liberation within those self-imposed confines, condensing metal's visceral power into one ferocious, pounding, often devastating whole.

By employing five distinctly different producers to helm the band's previous six albums, it was as if Pike and High On Fire were constantly in search of the right fit, and in Kurt Ballou they appear to have found a kindred spirit. Three years after helping to rejuvenate the band's sound on 2012's De Vermis Mysteriis, the partnership with the renowned Converge guitarist has yielded a new album in Luminiferous that's even better. It vividly captures High On Fire's unique chemistry, presenting it in a tone that's both warm and aggressive to the point of leaping out at the listener.

In the end, though, it's not about what a High On Fire album sounds like, but how it sounds like High On Fire; how inspired Pike is; how catchy those throttling songs are. The trio can churn out music with astonishing efficiency by now, but without great songs those efforts aren't worth much. What you hear in Luminiferous' nine tracks is quintessential Pike: His riffs are imposing; his solos, so deceptively melodic and expressive, reach toward the heavens; and that growl sounds stronger than ever after a few years of healthy living. Kensel is a perfect foil throughout, his tom-tom-laden rhythms creating a wall of percussion; they only enhance the primal, rampaging feel of "The Black Plot," "Slave The Hive," "Carcosa" and "Luminiferous."

To dissect Pike's lyrics would be mentally exhausting, and even his own explanations of the themes can result in hilariously convoluted monologues. He remains obsessed with conspiracy theories, aliens and alien conspiracy theories, saying in a statement a month ago, "We're doing our part to expose The Elite and the fingers they have in religion, media, governments and financial world downfall and their relationship to all of our extraterrestrial connections in the race to control this world." Taken at face value, though, Pike can be seen as a demented genius, a hesher poet who spews lines with playful humor and surprisingly effective rhythm. "Best close your thighs cause the Gods come a-raping ... Conjure life, inject the conjecture ... The Ḥashshāshīn's fate is forged on deeds of golden thrones." You don't need to know what the hell he's carrying on about to find it grand in its own nonsensical way, a veritable Necronomicon of metal gobbledygook.

Interestingly, though, Pike does throw listeners a curveball, stepping further away from the usual riffs and opting for contemplation over confrontation. Much as the ballad "Love Me Forever" raised Motörhead fans' eyebrows 24 years ago, "The Cave" finds High On Fire slowing down and quieting down. Its serpentine guitar and bass line sounds bluesy and exotic at the same time, with Pike showcasing a surprisingly emotive singing voice. Best of all, his words are genuinely evocative, as they directly address his battle to find sobriety and a new lease on life: "Work your art and do it well / Took the road to living hell / Past is then and now is now / Escaped the reaper with our vow." Far from a case of the band stepping too far outside its comfort zone, it's actually an exceptional example of dynamics in metal songwriting, as sedate verses and roaring choruses ebb and flow in authoritative fashion.

Smartly placed within the album's second half, "The Cave" prevents monotony from setting in, which in turn makes its climactic final 13 minutes all the more riveting, capped off by the stately and commanding closer "The Lethal Chamber." Finding the right combination of adherence to formula and subtle experimentation is the biggest challenge for any metal band that doesn't want to stray too far from the musical path it's chosen, and Luminiferous succeeds mightily. For High On Fire to exude this much vigor 17 years into its existence only reaffirms the band's mastery of the form.