Accessibility links
Interview: Munro Price, Author Of 'Napoleon: The End Of Glory' Historian Munro Price's new Napoleon: End of Glory imagines what might have happened had the French emperor followed through with a planned flight to America after his final defeat at Waterloo. 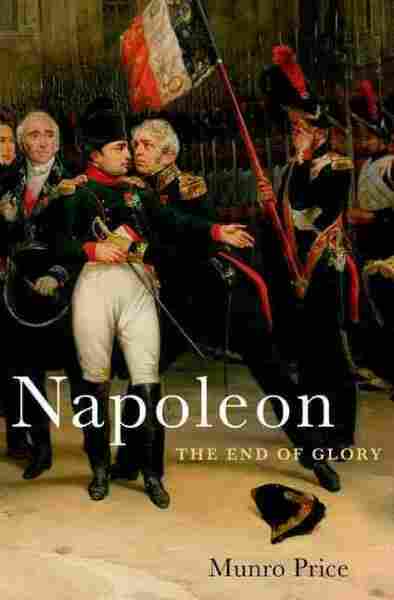 The End of Glory

Here's a preposterous idea: Napoleon Bonaparte, defeated at Waterloo, his 15-year run as dictator, conqueror and self-crowned emperor at an end, escapes to the United States. Well, as preposterous as that idea might sound, 200 years ago this month, Napoleon Bonaparte was thinking precisely that thought: Flee to America. How serious was he, and what would he have done if he'd become a Jersey boy? Munro Price is a professor of modern European history at Bradford University in England and the author of Napoleon: End of Glory. He tells NPR that Napoleon had just sustained the worst defeat of his career, "so he was clearly going to have to flee somewhere and there was one absolutely obvious and logical choice: The United States of America." Napoleon was even reading up on his possible new home.

On whether America would have been practical, or even possible

Um, no. Because the British had put in a naval blockade of the French coast. So the only other way of getting to America was being smuggled out and ultimately I think, that's what Napoleon refused to do. One of the ideas, for example, which was mooted was for him to hide in an empty brandy barrel, and the idea of being caught in this position was unthinkable for him.

Well when he was sitting in Paris, reading these books about America, he's talking about living as a private citizen, being a farmer. Also he talked about being a scientist and actually finding scientific companions with whom he would catalogue the flora and fauna of America from the North Pole to Cape Horn.

I would say he would not have lacked for supporters and people to welcome him. The U.S.A. under President Madison had just fought a war with Britain that put them de facto on the same side as France. And Napoleon would have been quite a useful bargaining chip for the American republic to have in its dealings with the European continent.

Yes, absolutely. The trouble with Napoleon is that he could never resist the temptation, I think, of absolute power and there's a very good phrase from the American historian Paul Schroeder: "Napoleon could never see a jugular without wanting to go for it." I think he wouldn't have stayed that long in the U.S.A.