Accessibility links
The Man Before The Guitar: Remembering Les Paul At 100 Paul is mostly remembered for his musical innovations, especially the instrument that bears his name. But he was also an accomplished jazz musician who kept performing even in his final years. 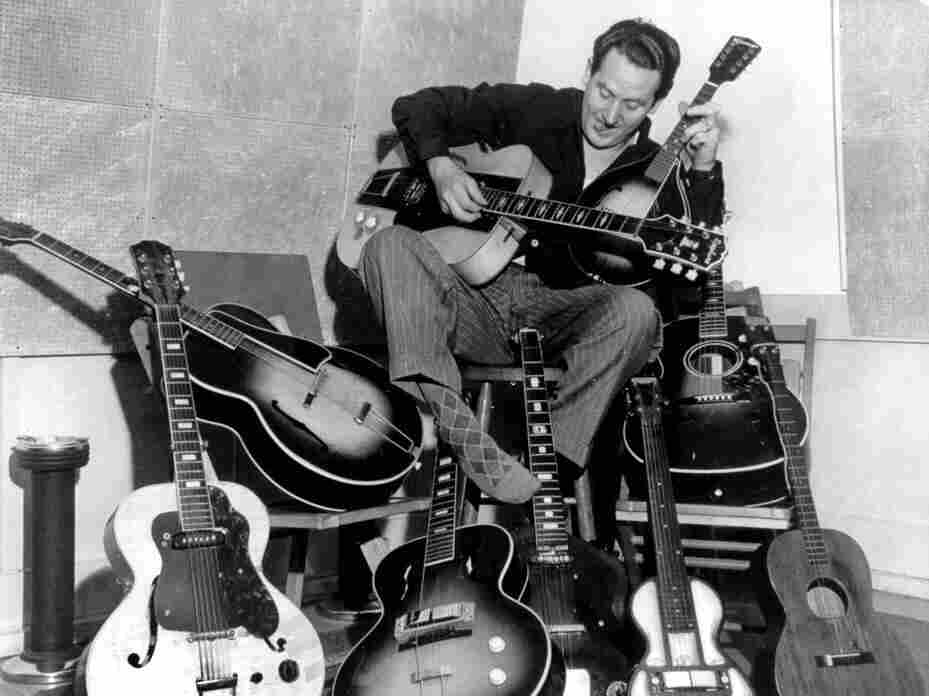 Les Paul's career as a guitarist and innovator led him to play jazz, pop and country with other legendary musicians for decades. Courtesy of the Les Paul Foundation hide caption 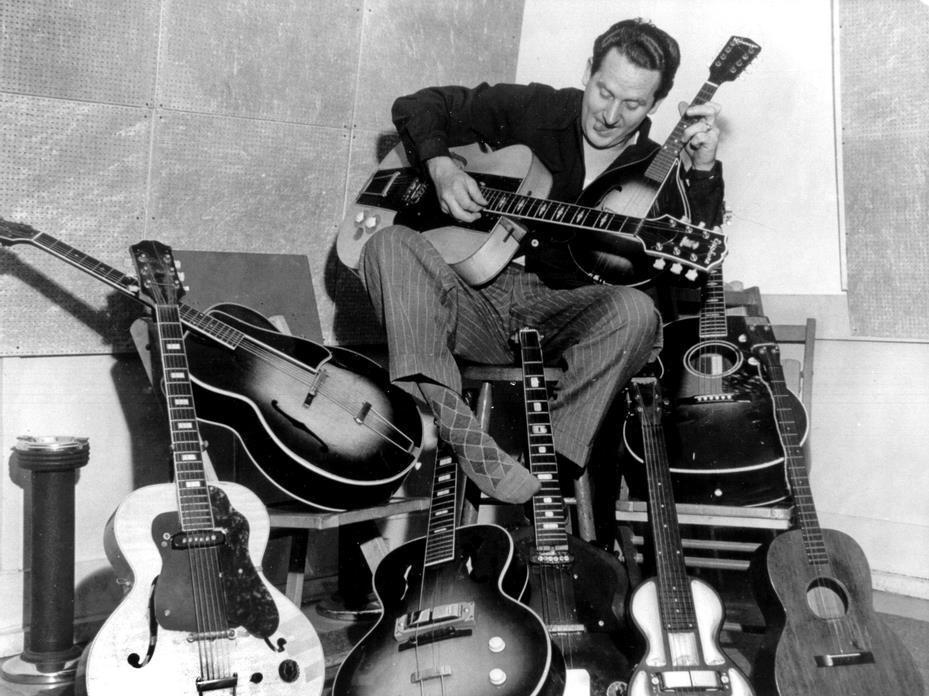 Les Paul's career as a guitarist and innovator led him to play jazz, pop and country with other legendary musicians for decades.

Courtesy of the Les Paul Foundation

Say the name "Les Paul" to anybody born after 1960, and they'll probably think you're talking about an electric guitar. But the musician and inventor, who was born 100 years ago Tuesday, was also an accomplished jazz guitarist. Paul was never happier than when playing for a live audience.

Pallo shared the stage with Paul every Monday night for close to three decades. They played a bit of everything Paul had done over his career, including country, pop and jazz. Pallo says that as a musician, Paul played with a rare amount of feeling.

"He loved playing the melody, and that is very hard to do," Pallo says. "He did 'Over The Rainbow' so pretty. I never heard anyone do it like Les did it."

"When I heard Art Tatum, when I heard Fats Waller, I knew that jazz was where I'd like to go," Paul told NPR. "And, you know, I dropped from $1,000 a week as a country singer down to $5 a week as a jazz player, and I said there's something wrong. That's when I formed the Les Paul Trio. Then I was down the middle of the road."

By the mid-1940s, Paul was in Los Angeles. He was invited to play in the landmark Jazz at the Philharmonic concert series, where he jammed with pianist Nat King Cole.

"They talk back and forth to each other, and it just knocks out the musicians and the audience," says Phil Schaap, a jazz radio host and historian. "It has been the primary illustration of Les Paul the jazz artist ever since."

Jazz was still only one of Paul's interests. He played with some of the biggest pop acts of the 1940s, including Bing Crosby and The Andrews Sisters. But his solo breakthrough came thanks to recording techniques he developed in his garage.

Paul used acetate discs — and later reel-to-reel tape machines — to record himself playing multiple parts. He sped up those recordings to make it sound like he was playing even faster than he could in real life.

Master jazz guitarist Pat Martino met Paul in the late 1950s. Martino was a 12-year-old prodigy from Philadelphia when his parents took him to see Paul for the first time. A few years later, Martino went to stay with Paul at his home in New Jersey for six months. He remembers Les Paul as an expert engineer who refined his sound through tinkering.

"He was an inventor, and of course he applied that in such a way that it enhanced the effect that he had as a guitarist, in terms of his ability and his clarity with precision," Martino says.

Just as Les Paul's solo career was taking off, he was badly injured in a 1948 car accident. Doctors couldn't rebuild his right elbow, so Paul told them to fuse the elbow at a 90 degree angle so he could keep playing guitar. After the accident, Paul recorded his biggest hits with his wife, singer Mary Ford.

Paul's success led him to help design the solid-body electric guitar named after him in the early 1950s. While the instrument is still a favorite with rock players, the rise of rock 'n' roll took a toll on Les Paul the musician. He retired from performing in 1965. By the 1980s, he missed it — and got a weekly gig at a small nightclub in Manhattan. At the time, he told NPR that the shows helped settle his lifelong struggle with playing jazz.

"Now I can go back and do what I've been wanting to do for a million years," Paul said. "All my life, I was torn between being commercial and playing jazz. If you play jazz, you don't eat. You don't sell your records. You turn people off. And the air gets thin. Today, I don't care about money. I don't care about anything. I just go in and play."

Pallo was Les Paul's bandmate at those weekly gigs. He says Paul was constantly tweaking the band's sound right up to the end, even if arthritis prevented him from playing with the blazing speeds of his early career. Paul played every Monday night until just a few months before his death in 2009.

"Every setback might be the very thing that makes you carry on and fight all the harder and become that much better," Paul told NPR in 2005. "And I probably will play until I fall over, and that's the end."