Accessibility links
The Truth About 'Mike's Place' Mike's Place is a real-life beach bar in Tel Aviv that could be Israel's answer to Cheers. But it's no sitcom. A graphic novel recounts the 2003 suicide bombing that left owners and patrons in shock.

The Truth About 'Mike's Place'

The Truth About 'Mike's Place' 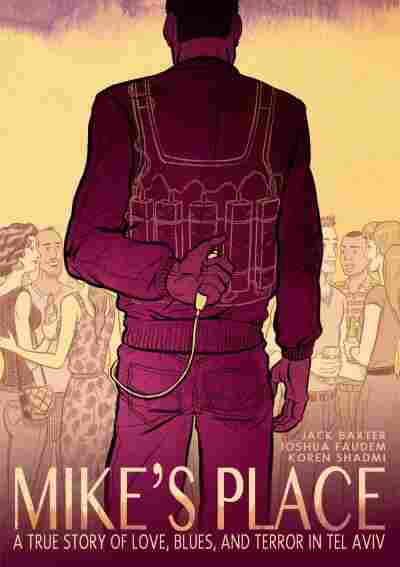 A True Story of Love, Blues, and Terror in Tel Aviv

There are places, according to popular belief and classic TV shows, where everybody knows your name. At these mythical sites you can find reasonably priced drinks and eats, great music and, most importantly, a certain elusive kind of people. They're the people you always wish you could meet — and at these few special places, you can. Behind these doors, everyone feels like — could it be possible? — family.

At one place in Tel Aviv, they were making a determined effort to live the legend. Mike's Place is a real-life bar, and according to a new graphic novel, it put the original Cheers to shame. At first its perfections seem improbable. Waitresses say things like, "It's a party here all the time at Mike's Place." And on "jam night," we learn, "somebody will let you play their guitar. Mike's Place is very freewheeling about that kind of stuff."

But the true story is a lot darker than one of a sitcom come to life. That's because, on April 30, 2003, a suicide bomber blew himself up in front of the bar. He took three people with him and injured more than 50 others. According to Mike's Place: A True Story of Love, Blues and Terror in Tel Aviv, it was the first time a foreign national ever carried out a suicide bombing inside Israel.

In the wake of this horrific event, the uncomplicated joy of Mike's Place suddenly doesn't seem so uncomplicated anymore. The effect starts in the pages immediately after the explosion, halfway through the book, when pieces of bodies are flung about and the gore actually feels much more realistic than the good cheer that filled the first part of the book.

Then the casualty counts start coming in. Dom — short for Dominique — a charming and beautiful waitress, loses an arm and dies on the operating table. Artist Koren Shadmi is unflinching in depicting her bloody stump with its exposed bone. There are two more deaths: A man named Yanay Weiss, who had a wife and kids and played bass with the bar's band, and a 23-year-old named Ran Baron.

More than 50 people were injured, including Jack Baxter, one of the authors of this book. A filmmaker who was shooting a documentary about the bar, he was partially paralyzed on his left side and experienced hearing loss. He also suffered the realization that he might have triggered the bombing; lurching up in bed one night, he gasps, "They picked Mike's Place because of the film! For the publicity! They wanted to be filmed!" It's not clear whether he's correct, but just the possibility would be terrible to live with.

Relationships also look more complicated in the wake of the bombing. It turns out that Dom, who was dating Gal, one of the bar's co-owners, was two-timing him with her roommate. And the happy young couple who'd been together just a couple of weeks when the book began, Joshua and Sasha, are inexorably drawn apart. For a little while, it seems as though the bar's famous community spirit will be another casualty.

But the owners, staff and patrons never waver. Even before a memorial service is held, Gal rounds up the staff to tell them he's committed to reopening. Over the last half of the book they mourn and rebuild.

Meanwhile, we're given a glimpse into the mind of another terrorist, a young man who fled the scene that night instead of setting off his bomb. We see his regret and confusion as he questions, and is eventually repulsed by, the radical ideology he was ready to die for. There's no evidence that this is what the man actually felt — he was only discovered when his body was found, drowned, days later — but Baxter and co-author Joshua Faudem delve into his conflict with assurance and eloquence.

Watching people patch things up, grieve the lost and try to carry on isn't fun reading, but there's nothing artificial about it. The bar was the real deal even before the bombing, and that terrible event only proved it. They may not know everybody's name at Mike's Place, but one thing's for sure: They're family.