Accessibility links
'Meteor' Is A Fiery Ride Through American History Norman Lock's new novel takes readers on a breathlessly-paced tour of the Old West, from the point of view of a former Civil War bugle boy who tags along with some of the era's legendary characters.

'Meteor' Is A Fiery Ride Through American History

'Meteor' Is A Fiery Ride Through American History 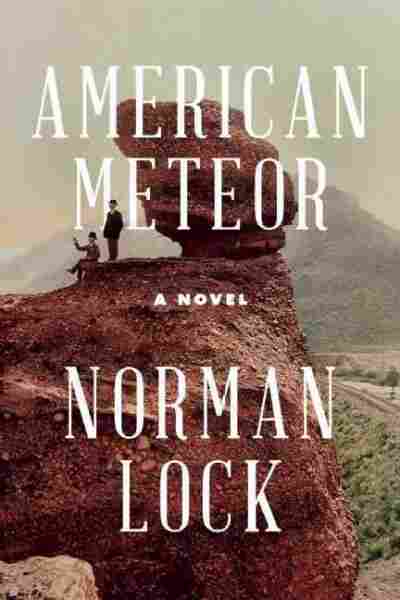 Only last year, New Jersey writer Norman Lock brought out The Boy in His Winter, his time-travel version of Huck and Jim's passage along a great American river, and the river of time. In his new novel, American Meteor, Lock demonstrates that he doesn't have to lean on other people's creations to make a novel worth reading. He invents a cast that includes doctors, photographers, poets, presidents, and Indian chiefs, making a fable all his own which sheds brilliant light along the meteoric path of American westward expansion.

To tell the story, Lock gives us a Civil War bugle boy from Brooklyn named Stephen Moran, a young fellow cynical almost from birth. When he feels his conscience gnawing at him, Moran tells us, he wishes he "could have it out, like tonsils." He narrates events in quite a great rush, and with a particular squint, since as a 13-year old Union soldier he lost an eye at Five Forks, when a spark from his own rifle blew back into his face.

Moran gives us a rapid account of his youth in Brooklyn, where he happens to see Walt Whitman on the beach at Sheepshead Bay, chanting lines of verse into the salty surf. He meets Whitman again (in his fabled role as wound dresser) while lying in bed at a military hospital in Washington after his Five Forks disaster. This encounter he parlays into a meeting with General Grant, who pins a medal on him and offers him a post as the bugler on Lincoln's funeral train.

All this in 40 breathless pages. And then young Stephen finds himself demobilized in the Midwest, where he loses his virginity and snares a job as assistant to Thomas Durant, one of the roguish creators of the transcontinental railroad, and then — catch your breath here — apprentices himself to the great American photographer William Henry Jackson. This leads him to meet General Custer — whom he despises — and Crazy Horse, one of Custer's great opponents, whom he worships.

Custer, as Moran describes him, was one of those "American meteors ... a man fated to burn brightly, only to be extinguished in the cold sea of time and ... the forgetfulness reserved for legendary men and women, whose true characters — good or bad — lie buried beneath the sediment of stories told about them." Lincoln was also one, as Moran sees him. As was Crazy Horse.

Moran has a plan for Custer: To extinguish his light forever. And Crazy Horse happens to have a plan for Moran, which he formulates almost instantaneously after an apocalyptic meeting on the battlefield of the Little Bighorn.

All this in just 200 pages, during which the narrative settles down only now and then — mainly in moments when Moran looks around at the broad rivers and western lands and mountains and sky. And he gets better at it and better at it. While working for the photographer Jackson, he learns to focus his single working eye in sharp aesthetic fashion. For all of his early posturing about his lack of a conscience, our bugle boy, now nearly a man, comes to see life a bit differently.

After a trip to the Utah site of an atrocity committed by Custer, Moran beds down for the night and watches "the moon climb up a corner of the sky and start down the other side. The stars composed their ancient stories, told each night to an earth that suffers under our domination. The bones of nine hundred Indian ponies shone under this same sliver of a moon, near the Washita River in Indian Territory, after having suffered natural processes to turn them into a ruin interesting to photographers. In November Custer had ordered the ponies shot after his 7th Cavalry killed the Cheyenne while they slept beneath white flags raised above their tents."

That's how I felt while reading this pithy, compact beautifully conducted version of the American Dream, from its portrait of the young wounded soldier in the beginning to its powerful rendering of Crazy Horse's prophecy for life on earth at the end — quite taken by surprise.