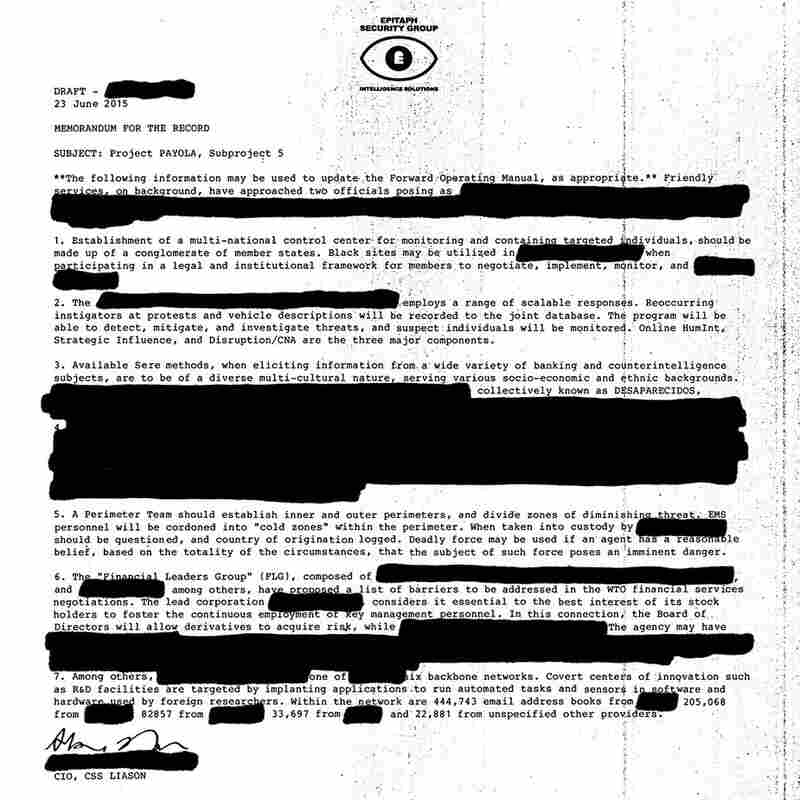 Desaparecidos chose an auspicious time to break a 13-year hiatus. Since its last record, 2002's Read Music/Speak Spanish, the crusade against disenfranchisement and corruption in America — this band's founding fire — has changed course and broadened. Consider the headlines of the last few years alone: Occupy Wall Street, WikiLeaks, police brutality, Edward Snowden, the transgressions of the NSA. In mid-2015, the fodder for agitated, political punk is both endless and rich.

Devoted fans of Desaparecidos have likely sensed Payola — or something like it — was coming for a while. In 2010, the band played a Concert For Equality in its hometown of Omaha, and in 2012, it released a handful of new singles and announced a brief tour. Back in 2002, Desaparecidos (translated loosely from Portuguese as "disappeared ones," it references any political prisoner claimed and subsequently erased by a South American dictator) lamented the blind homogenization of the American frontier, the endless strip malls and parking lots and sub-sub-divisions. Now, singer and guitarist Conor Oberst is targeting endemic injustice, turning an eye toward racial profiling, the mistreatment of immigrants, corporate greed and domestic spying.

Besides leading Bright Eyes, Oberst has had stints in Monsters Of Folk and as a solo artist (among other detours), and while he's still best known for voicing Bright Eyes' plaintive, confessional dirges, his big, manic, quaking pipes are an especially good fit for Desaparecidos' post-hardcore wailing. There seems to be no foreseeable finish to Oberst's earnestness or his outrage — given his time and place, why should there be? — and it both animates Payola and makes it quiver.

Oberst, for all his fervor, isn't writing lyrics that require sophisticated interpretative work ("Now we're taking it back / For the greater good / Goddamn Robin Hoods," he hollers in "The Left Is Right"), and much of the success of Payola lies in its musical articulation of inequality: all the careening licks and clattering drums, a cabal of ireful teens kicking a garbage can around a suburban cul de sac. Oberst should have pushed harder to evoke the wit and causticity of an ace polemicist like Joe Strummer (or even Bob Dylan), a feat he's managed elsewhere in his career. But these are protest-rousing anthems, and they play that way — broad and angry.

Co-produced by Mike Mogis, Oberst's longtime producer and partner in Bright Eyes, and featuring guest spots from Cursive's Tim Kasher, Against Me!'s Laura Jane Grace and the So So Glos, Payola is more melodic than its predecessor, though it's also indebted to '80s hardcore bands like Cro-Mags and, on occasion, certain strains of thrash metal. These are noisy, restless songs that lurch. Thematically, the record concerns itself with institutional failings — what happens when systems designed to protect a country's citizens falter, or are somehow weaponized and turned against us — and while it doesn't propose any solutions, it does proffer an enormous amount of raise-your-fists solidarity. That's the operative idea: to band together and be furious in tandem.

Still, the idea of a full-length record acting as a default rallying point — a way for like-minded people to find each other, a kind of secret handshake — seems anachronistic these days, which could be why popular protest songs are scarce, and why a protracted movement like Occupy never found a musical center. Now, the sound of dissent is a thousand keyboards clicking, a thousand phones being unlocked. Folks gather in the street, but both the preamble and the debrief — the parts where seismic ideas are born and progress is parsed — happen online, and to whatever soundtrack you prefer.

So what does that mean for a protest band making an album in 2015? Anyone who came of age before the web remembers the queasy glee of unexpectedly uncovering — whether via word of mouth or in a particular bin at the record store — a bit of art that perfectly voiced some personal turmoil or gave shape to something that couldn't be articulated in any other way. The pathways have changed now; those bits are easier to isolate and examine. But the catharsis remains the same. Anyone feeling alone in their disillusionment, or who hasn't heard it reflected in a way that makes sense, will find plenty of empathy and support here.