Accessibility links
'Modern Romance' And The Emerging Audiobook Aziz Ansari's Modern Romance is a good example of an audiobook that finds new ways to play with format and style in a way that builds a separate performance rather than just reading aloud. 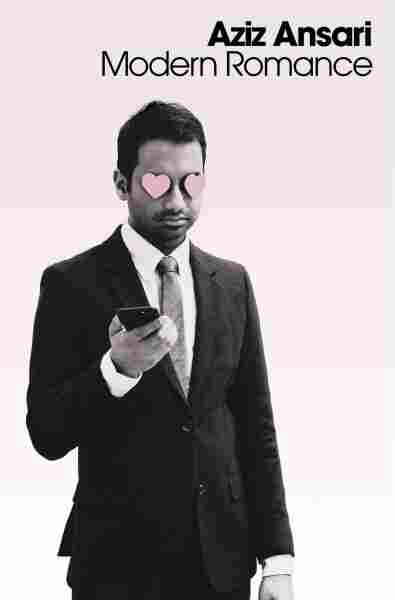 Audiobooks have traditionally been tricky to get right and even harder to make special. Very often, they're literally just books read aloud, to the best of the ability of a single, usually highly skilled reader. In fiction, you get readers who are asked to provide voices for however many characters the author invented. Some, like Bobby Cannavale in his fantastic read of Richard Price's New York crime novel Lush Life and Michael Beck with several different John Grisham novels, bend and twist their voices to give life to a broad range of people of different genders and races and backgrounds. Others modulate their tones just a little, just enough to distinguish the dialogue. (How tricky it is to find readers for romance novels, who are usually women, who can credibly and comfortably voice female romance protagonists and male romantic heroes as both are usually written is a fascinating side road I won't wander down today.)

In nonfiction, you usually get a straightforward read-through of the text for hours and hours, which can be satisfying or very taxing, depending on whether the voice pleases your particular ear. But for much of the history of audiobooks in the post-MP3-player and post-smartphone era, it's still been mostly just somebody reading a book out loud to you.

That's changing, though; experimentation is ongoing. Some of it is a logical extension of a project's structure: the audiobook of the Paula Hawkins novel The Girl On The Train, which is a story told by three different narrators, uses three different women to voice those narrators, section by section. Some, though, is formally provocative: John Scalzi's Lock In comes in two versions – one voiced by Wil Wheaton and one by Amber Benson – because the gender of its narrator isn't specified.

Books by performers, though, have maybe been making the biggest strides toward an independent argument for audiobooks. Tina Fey's Bossypants benefited enormously from the sound of her voice, for instance, and Amy Poehler voiced Yes Please earlier this year with the help of a cast that included Seth Meyers, Carol Burnett, Patrick Stewart, Kathleen Turner, and Amy Poehler's parents. B.J. Novak's One More Thing: Stories And Other Stories is largely read by Novak, but it plays with the use of other actors — it includes a really lovely performance from Lena Dunham as a sex robot (just ... listen to it, it's very good), as well as turns from Jenna Fischer, Julianne Moore, Rainn Wilson and, of course, Novak's frequent collaborator Mindy Kaling (who's very funny). More and more, as the format grows beyond the niche it seemed to occupy when I first started buying audiobooks in 2004, people are trying different things to make the audiobook not just an alternate delivery mechanism for the text for reasons of either convenience or necessity, but a separate, satisfying piece of creative work with its own reasons to exist.

The latest entry in this category is Aziz Ansari's Modern Romance, which is out this week. The book has been excerpted all over the place and Ansari talked about it yesterday on All Things Considered, and it's quite good. Without rehashing the content too much, it's a book that grew out of stand-up that Ansari was doing about relationships, particularly in the context of texting and online dating. He teamed up with sociologist Eric Klinenberg and did interviews and focus groups and had a community on Reddit. They also spent a lot of time looking at data both from academics and from companies like Match.com. The result is perhaps not startlingly new information about relationships, but a solid and interesting tour of what we know about how things are changing, all delivered within Ansari's silly but smart sensibility.

But the audiobook brings something different to this material for a few reasons. First, you really want to hear an experienced live performer whenever you can. He's got a great and lively voice, and if you're going to snoop in the actual texts of a bunch of strangers (which you will), you want to hear those texts read by a comedian. (Trust me.) Some of this, he acknowledges, comes at the expense of some of what's special about the paper book: the book has charts, he tells the listener, and he'll do his best to describe what they show, but you can't see them when you listen.

Second, this is an unusually self-aware audiobook. What I mean by self-aware is that, among other things, it starts with a two-minute track in which Ansari explains that this is the audiobook you're listening to and starts to build what will become a running joke for audiobook listeners only: being ribbed about how lazy you are for not picking up a paper book. (You can hear it here, but please be aware that it contains a couple of profanities.) He will return to this a few times (later, he'll ask if you also go to restaurants and make them read you the menu), and it never feels mean. It just feels like extra jokes, and perhaps counterintuitively, it helps make it seem less like you've bought an alt-version of a paper book and more like this is its own project with its own justification. It acknowledges that listeners are a distinct group who are enjoying a distinct performance, not just people peeking over the shoulders of other people. Some of it is even meta-humor about audiobook production: like many readers, Ansari delivers his introduction over a musical track – in this case a sort of synth-seduction smooth jam – and winds up explaining that he's letting the music run instead of getting on with the book because it's so good.

There's no reason, really, that audiobooks can't benefit from a lot of the same dynamics that are helping to boost podcasts. It's all spoken-word audio, and both are forms that the world of apps and smartphones has made infinitely more accessible and convenient. (All my audiobooks are on my phone; my review copy of Ansari's book came on five CDs, which, as I popped them in and out of the CD player in the car one by one, made me feel like a cassette would have felt five years ago.) Furthermore, if wearables like smart watches successfully work their way into the mainstream and keep even screens as small as phones in people's pockets more of the time, some of the e-reading growth of recent years could move in the direction of listening that you can command by talking to your wrist. But if audiobooks are going to realize those possibilities, it will help a lot for minds to be open as far as what an audiobook can bring, and can be, that's not just text-to-speech.

Back in 2009, there was a brief moment when people believed automatic text-to-speech on Kindles was a threat to audiobooks; these are people who profoundly misunderstand audiobooks. More and more, they're developing into something that, at times, sneaks up on a hybrid of traditional audiobooks and old radio dramas. Kind of like dating, I suppose, listening to books is being carried along by technological changes that it's going to take creativity and thoughtfulness – and smooth jams – to survive.