Accessibility links
GoldLink: 'I Create Music For People To Dance To Again' The D.C. rapper and singer talks about raising the bar in rap and making people move with his signature "future bounce" sound.

GoldLink: 'I Create Music For People To Dance To Again'

GoldLink: 'I Create Music For People To Dance To Again' 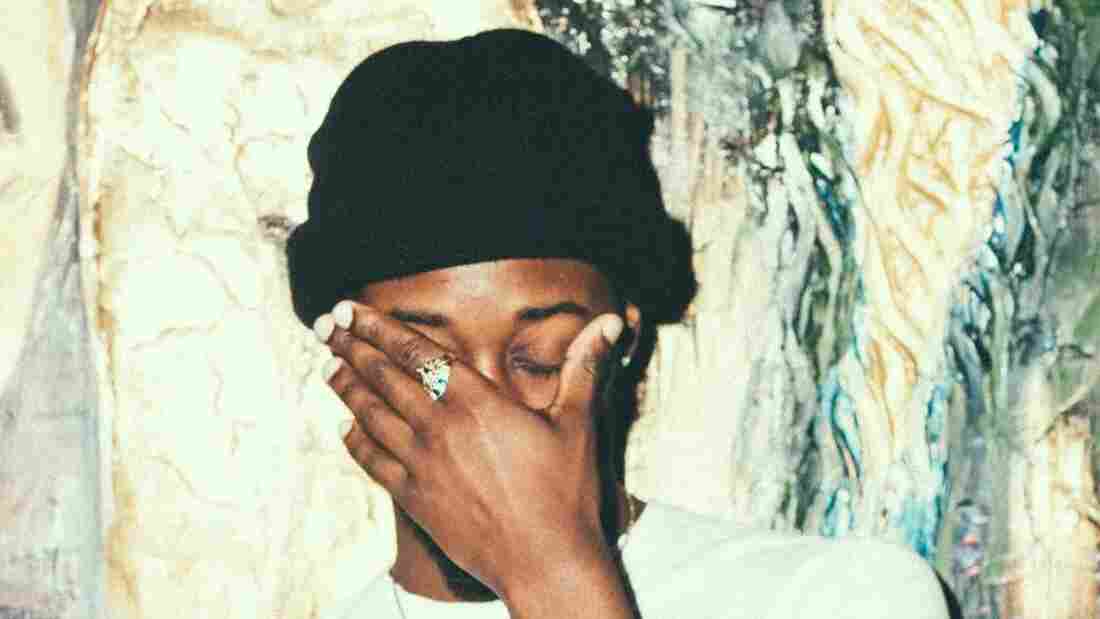 GoldLink wants to be known for his music and not his face. Courtesy of the artist. hide caption 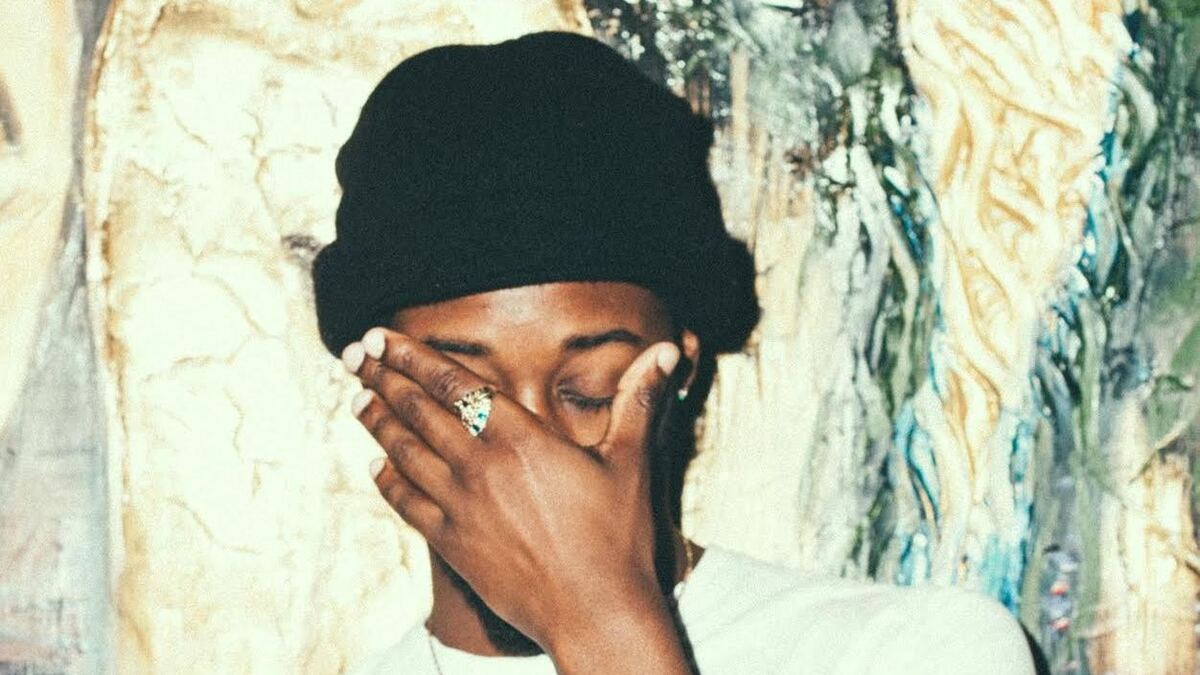 GoldLink wants to be known for his music and not his face.

GoldLink knew exactly what his New York City audience was thinking as he first hit the stage at S.O.B.'s on June 10: "I know y'all are probably wondering, 'What the f*** is this guy wearing?'" Well, actually it was obvious: a Speedo flotation vest. The better question was, why was he wearing it?. The sweat that ran down his slight frame throughout his set was substantial, sure, but not enough to drown in. It wasn't until the end of the show — an hour after his groovy brand of soulful, danceable hip-hop wrapped — that it all made sense. His Washington, D.C., hometown buddies joined him on stage, water bottles in hand. They uncapped them and things got wet; inflatable turtles and sharks swam in the audience. A pool party, sans pool. It was crazy. It was fun.

That type of energy has fueled the buzz around rapper and singer D'Anthony "GoldLink" Carlos, a '90s baby who draws musical inspiration from stars of that era in hip-hop and R&B. Soulection DJ LAKIM warmed up the crowd with a mix that made once-menacing cuts from Nas or slow jams like Ginuwine's "Pony" woozy, but somehow even more fit for an all-out party. 'Link's tunes are high energy. Even when unloading thoughtful raps from his 2014 mixtape, The God Complex, they at least encourage a head bob. At most, there's what's seen at his concert: uncontainable, remarkably on-beat movement to tracks like his Kaytranada-produced "Sober Thoughts."

The afternoon after that NYC show, a sleepy GoldLink caught up with NPR while en route to Boston to discuss why he's trying to bring rap music to a higher level than he met it at, his lack of interest in his peers' opinions of his rap skills, and what the future has in store for him.

On your mixtape, there are a lot of pop-culture references from the '90s, be they Mortal Kombat video-game lines or samples from TLC. What do you look for when selecting music to write to?

That's what I grew up on, really; that's where a lot of the inspiration comes from. I just like a beat that grabs me. And then I'll come up with a concept after. I like to take my time with music.

You also use a lot of melody. I don't think you have many rap verses that don't include a hint of singing. Where does that come from?

Just to change things up. Regular rap is kind of outdated now. It's about adding your own flavor to it now. You can train your ear to be a little different. I want to be entertaining. I sort of do it for entertainment purposes.

You can actually sing, though. You're even more confident live on stage with showing that side.

Do you have any singing experience? Did you sing in church or anything?

I used to sing in a choir when I was young. My mom forced me hardbody. I was hella young, like 5 years old. That's about it. But since then, it wasn't like I was always singing. It kind of just happened. I got comfortable in my own skin and then I started doing it for the f*** of it, just seeing what happens.

Would you ever consider doing a song where you sing the entire thing, no raps?

For sure, in future projects going forward.

It seems like a goal of your music is to make people dance; is that accurate?

Yeah, it's a goal of mine. I create music for people to dance to again. In black culture, you know, we used to go swing dancing. We used to go out to go dance and actually have fun. That's kind of a lost art with what's going on now. People just go to the club to hate on n*****. I'm like, "What's the point?" You know what I'm saying? God gave us music and limbs to move around. So I try to encourage that as much as I can for my crowd. It's a really good thing that people respond to that in this day and age.

At the end of your show, you paid homage to your D.C. go-go roots by playing UCB's "Sexy Lady." You don't really put much from that genre in your music as far as instrumentation. Do you think you will?

Maybe in the future. Go-go to me, though — low-key, is kind of like a time capsule. It's something that happened, and it can't really be duplicated or anything. The only thing I really take from it is the BPM and the bounce from it. That's about it. Aside from that, I just let it be.

On your song "When I Die," you talk about what you want when it's all over for you. What are your goals as a musician?

I'm trying to get the quality of rap music back up to par. Because right now it's f****** terrible. If can kind of help everything get better... I'm 22 years old. I grew up with bubble-gum rap. Seriously, in 2003, 2004, it was Chingy "Right Thurr." That's not that long ago. I grew up on s*** like that my whole life. We've been trained to so much bad music that we don't even know what's good anymore. I wasn't born in the era of Michael Jackson or James Brown. Or Neil Young or Willie Nelson or Tom Petty or Stevie Wonder. But Stevie's so good to me and I don't even understand it. But it's so good and it became timeless. It's quality. We don't understand that, because we never had a timeless artist in my generation. I guess my thing is trying to up the quality of music, so people know what's really good and what's really bad.

You took a little time out of your show to simply go a cappella and rap; then you said that those verses were for folks that think you can't rap well. How important is it for you to show people you're a great rapper technically?

I think I stand out because I don't sound like anybody else. I'm trying to do my own thing to the best of my ability and not imitate. I'm making my own mold.

Aside from Wale, there really isn't a standout rapper from the Washington, D.C., area that's succeeded recently. Did people believe in you early on when you were first starting to make The God Complex?

I was really by myself rapping. You can't really explain what I do to someone that's never seen it before in D.C. You just have to do it and have everyone witness it. So I was really quiet, but believed in myself.

Were your friends surprised when you first let them hear your music?

Yeah. It was like, "What? I didn't know you could do that!" The people that are around me now are the only people that got it then. They said, "I get what you're doing." They believed in it 100 percent. They understand music and where it's going. It takes a visionary and a very strong-minded person to see what I'm doing. Those are the kind of people that supported me from day one.

What can we expect from you next musically? Are you working on your debut album now?

I'm really trying to craft something very awesome for the world. A tape.