Accessibility links
From The 'Inside Out,' A Lively Look Inside A Young Mind Pixar's latest creation, which takes place inside a young girl's mind, is visually ambitious, emotionally affecting, and ultimately very wise.

From The 'Inside Out,' A Lively Look Inside A Young Mind

From The 'Inside Out,' A Lively Look Inside A Young Mind 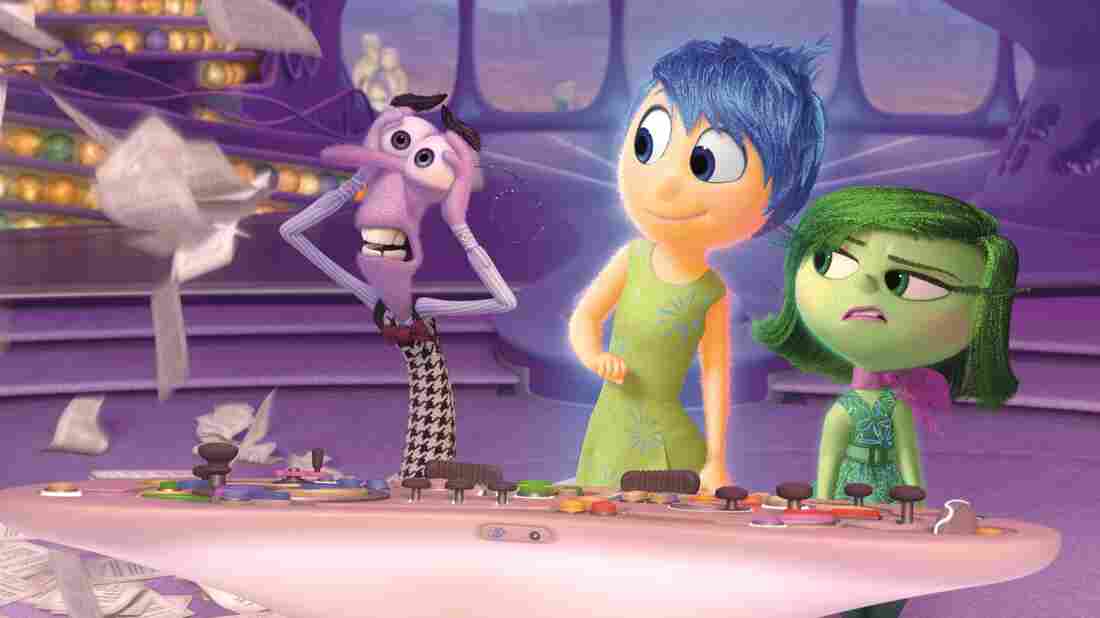 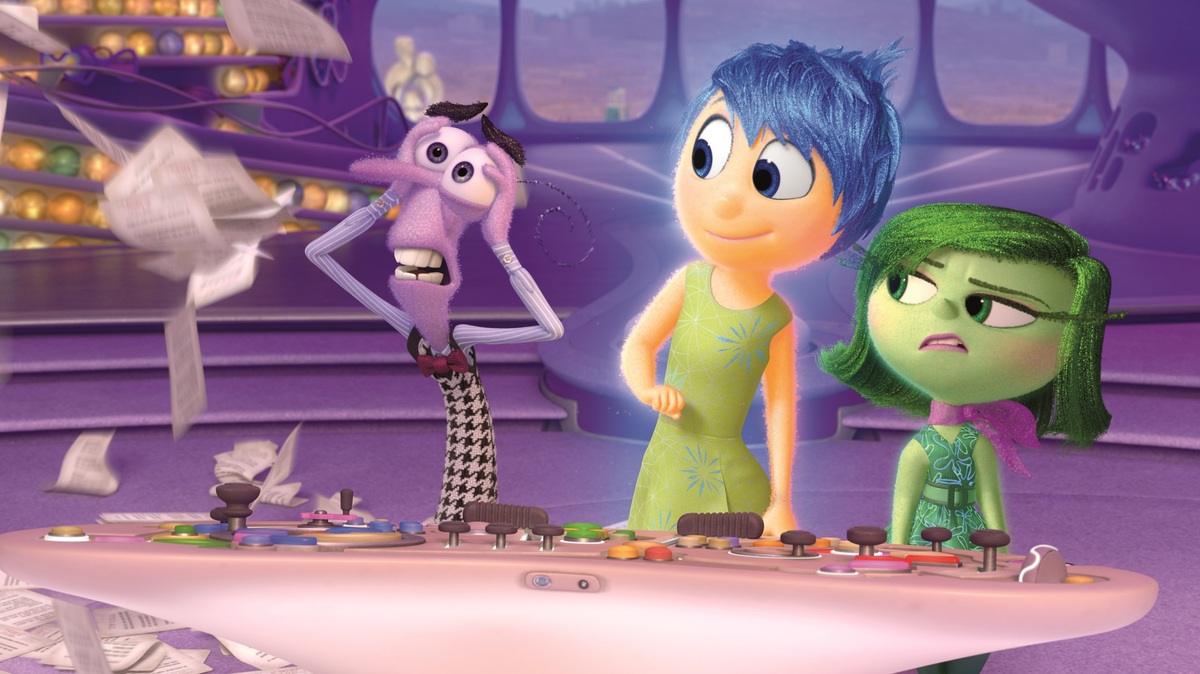 Pixar's Inside Out is the perfect tool for coming to grips with what has happened to Pixar itself. The film's most valuable insight is that it's natural to feel sad about growing up, which is true even when the thing growing up is a movie studio that has shepherded countless childhoods. As of late, the vibrant creative energies that produced WALL-E, Up, and The Incredibles seemed to be fading into the past as the Disney-owned company did the adult thing: capitalize on its brand potential (Cars 2, Monsters University) at the expense of the unfiltered imagination that defined its younger years. So go ahead. Be sad, or angry, or disgusted, or afraid. It's normal.

When we're lucky, though, sadness can also bring joy, and Inside Out is joyous indeed. Enter 11-year-old Riley (Kaitlyn Dias), who seems to be the film's hero but is in fact the. . . setting. Hold that thought.

In her early childhood in Minnesota, Riley was living the dream: hyper-attentive parents, good friends, and youth hockey stardom. Now her dad is moving the family to San Francisco, where she knows no one at school, her parents are suddenly too busy for her, and hipster chefs have ruined pizza by slapping broccoli on top. The horrors of adolescence aren't making these changes any easier to stomach, as all survivors of that traumatic era can attest.

We know how Riley feels. In fact, we know her better than we've known any character in film history. From the beginning, directors Pete Docter (Up) and Ronaldo Del Carmen plunge us inside her mind to meet her emotions firsthand—the true heroes. What do emotions look like? Turns out they look like Disney cartoons: brightly colored sprites with effervescent shimmering skin, as though ready to burst at any moment. There's Joy (Amy Poehler), a Tinkerbell-ish golden girl who only wants to keep her host happy; Sadness (Phyllis Smith), a hunched-over, turtlenecked moaner who seems to turn Riley's memories as blue as she is; and their three coworkers, high-strung Fear (Bill Hader), posh Disgust (Mindy Kaling), and Anger (Lewis Black in the role he was born to play), so hotheaded he shoots fire from his noggin when he boils over. They work in "Headquarters," a giant control room (think the Bridge on Star Trek) with buttons and switches to control Riley's actions, and their work produces the girl's hard-earned memories, which take the form of colorful glowing orbs that replay moments on a continuous loop, like GIFs in a snow globe.

Hang tight, because there's a lot more going on inside Riley's, and this film's, wonderfully warped mind. (Docter's inspiration was his own adolescent daughter's changing emotional state.) Half the fun is the surprise of seeing what turns up, so a spoiler warning is necessary here: The family's big move touches off a round of infighting in Headquarters, as Joy tries to squeeze Sadness out of the picture for what she believes is the good of Riley's health. But her efforts backfire, and the two are launched to the furthest recesses of the girl's headspace, leaving Fear, Disgust, and Anger running the ship. To get back, Joy and Sadness will have to hitch a ride on—what else?—Riley's Train of Thought.

The pair's odd-couple journey gives us a grand tour of the brain's many wonders. These include the impossibly deep storage facility that keeps and recalls memories and a literal dream theater—a Tinseltown studio backlot where a film crew in Riley's subconscious stages her nighttime entertainments. Each new stop is another masterstroke in visual storytelling, and the film boasts Pixar's most ambitious production designs to date. Though there's a candy-colored vibe to everything, reminiscent of midcentury filmstrips, there's also a darkness bubbling, a sense that maybe Sadness isn't so misplaced in the psyche of this rapidly maturing youth.

Given how easy it would have been for Joy and Sadness to feel like exhausting caricatures, Poehler and Smith's voice work is all the more remarkable. The stellar actors help turn their feelings into fully realized characters, in ways that may even override their purpose in the story (how can Joy feel sad? Does that make sense?).

The idea of a collection of separate beings wrestling over control of a human smacks on paper of the early-'90s sitcom Herman's Head, or the Eddie Murphy comedy Meet Dave, in which tiny aliens in Murphy's skull turned his every action into flamboyant performance art. But Docter's team pulls off a seamless fluidity between "real" life and the wild, abstract life of the mind. Even though five distinct personalities are behind the wheel, Riley's actions and reactions never feel anything but human, and she aches and jumps for joy just like everyone. It's this commitment to humanity that makes a seemingly low-stakes climax—Anger's misguided solution to Riley's California woes—pack such an emotional wallop. What's the worst that could happen? How about deep, irreparable rifts in a child's mental health?

Inside Out is only 94 minutes long, but stuffed with enough loving detail for five movies. What about the intricate designs of those "personality islands" formed from Riley's core memories? Or Bing-Bong, the imaginary friend from childhood? The "Abstract Thought" chamber, a treat for animation geeks? Above all, there is the film's stealthy, insightful approach to child psychology and its wonderful distillation of concepts that most filmmakers would never attempt to express in this medium. The movie is unabashed about its sentimentality, because it's teaching us about the raw power of sentiment: This is how memories are formed. Inside Out isn't just a sign of renewed youth from Pixar. It's the reason Pixar exists.

A note on the preshow: The latest Pixar short is "Lava," a love ballad sung between two volcanoes. Sadly, it's one of the company's weakest short films to date, lacking the clever conceits of classics like "Gerry's Game" and "Night And Day." Your brain will be sending the ukulele theme song up to Headquarters for weeks after, and no, that's not a good thing.