Accessibility links
One 'Overnight,' Two Couples, Countless Boundaries Violated A new comedy starring Adam Scott and Taylor Schilling tests the boundaries of good taste for both the two couples at its center and the film itself. 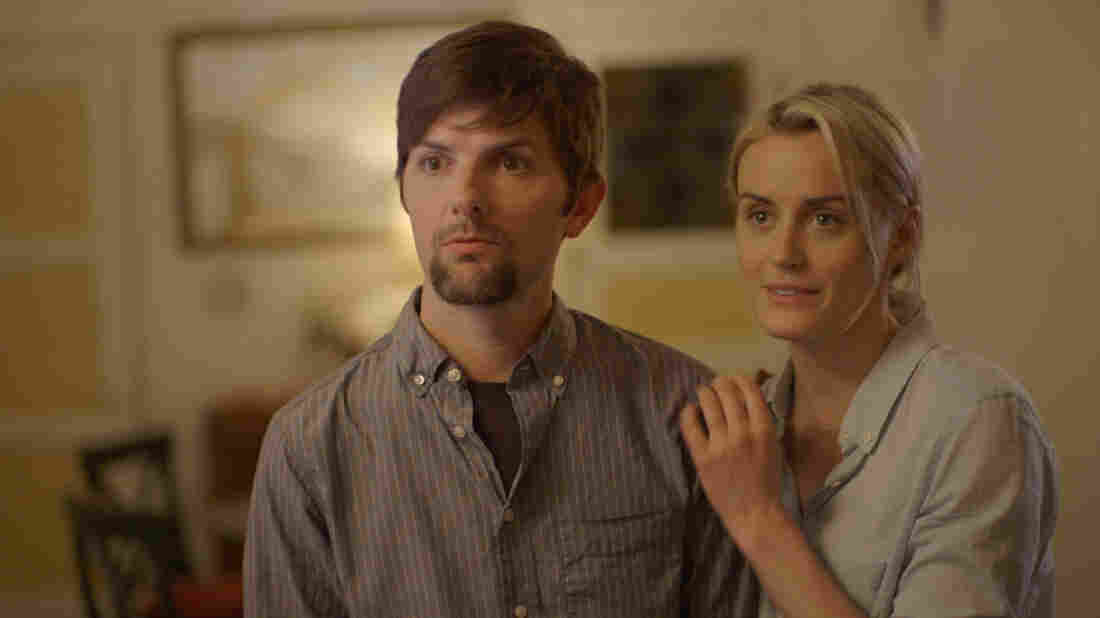 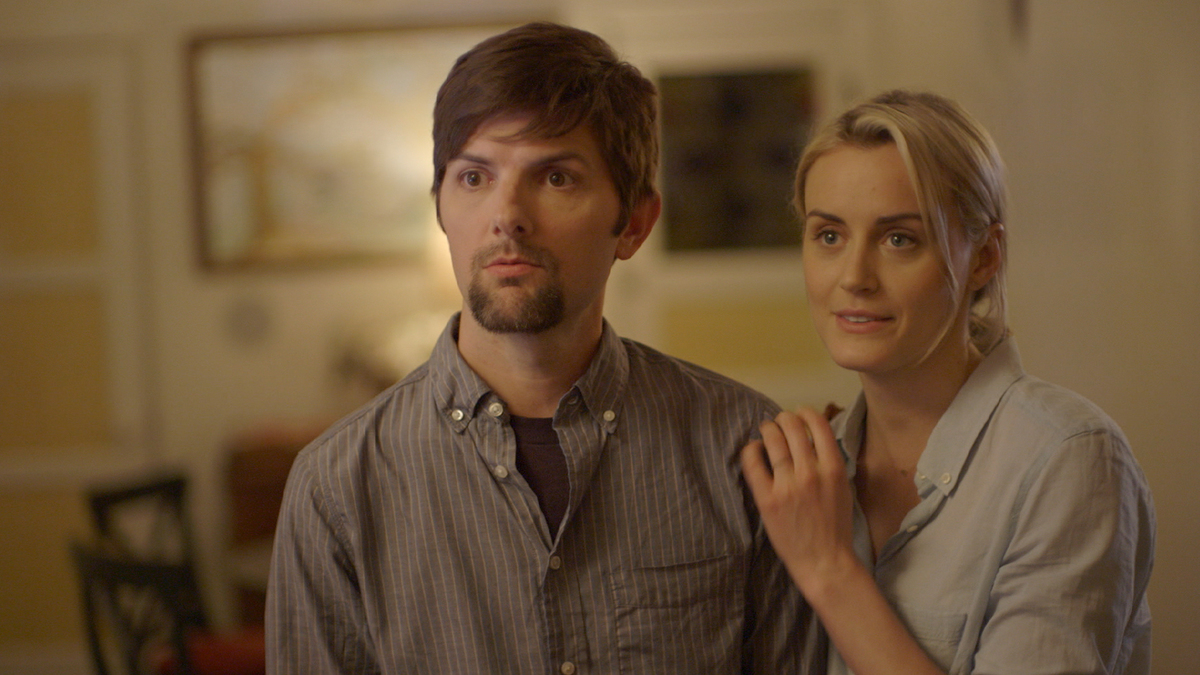 Adam Scott and Taylor Schilling in The Overnight.

"I thought you wanted to loosen up," Charlotte (Judith Godrèche) asks Alex (Adam Scott) close to the end of Patrick Brice's The Overnight. "I do," Alex replies warily. "But I guess I'm just wondering what loosen up means at this point."

It's a fair question given how, at that moment — i.e. somewhere around three or four in the morning, alone in Charlotte's bedroom — Charlotte and her husband Kurt (Jason Schwartzman) have known Alex and his wife Emily (Taylor Schilling) for less than 24 hours, but the couples have managed already to get drunk, stoned and naked together, to list only some of their more publishable interactions.

The debauchery by this point has become pronounced, but it develops gradually, and Brice manages admirably to make his comedy at once daring and earnest, outlandish and relatable, obscene and sweet. The Overnight opens just after Emily and Alex have moved to Los Angeles with their son RJ (R.J. Hermes). When RJ becomes quick friends with Kurt's son Max (Max Moritt), the parents decide to get together for dinner.

To start, The Overnight largely occupies itself with taking jabs at hipsters, sometimes in a way that's too obviously derivative of Portlandia and its ilk. When Alex realizes that Kurt and Charlotte are impressively wealthy, for instance, he rips the label off the Two-Buck Chuck wine that he and Emily have brought over for dinner and pretends that it's from a local winery that uses recycled bottles. "It's organic," he proclaims.

Apart from that, the film's hipster mockery focuses on Kurt, who, upon first meeting Alex and Emily, informs them that they've moved into the coolest neighborhood in town, extols the nearby oyster bars, and becomes worried when he finds out that the two haven't done their tours of local schools yet. It also turns out that he's the kind of Renaissance man who designs his own house, makes water desalination filters for impoverished countries, and paints on the side.

In this respect, The Overnight's general tone and subject matter recall the work of the Duplass brothers, both of whom serve as executive producers on this film. (Mark Duplass is also a co-writer and co-star of Creep, Brice's first movie, which was recently released on iTunes.) The hipster satire certainly unites the artists, as does the increasing focus on Kurt and Alex's male bonding. But there's also a commitment to candor, and a similarly direct approach to achieving it, that carries through their movies.

The Duplass brothers seek a visceral realism through their improvised scripts and handheld camera work. Brice, meanwhile, seems to believe that the only path to honesty is through head-on confrontation. So if male insecurity is going to be central theme of the movie, as it is here, then a liberal use of male nudity is necessary to make that discussion quite specific.

In The Overnight, as in some of the Duplass brothers' movies, this philosophy of direct confrontation inspires an increasingly absurd escalation of events as the two couples, upon putting their kids to bed, proceed to stay up all night testing the boundaries of their new relationship. But what keeps the movie together, what prevents it from being a laughable showcase of risqué acts for the mere sake of showing them, is its emotional sincerity.

Part of the credit here goes to the actors, particularly Schilling, who, as in Orange is the New Black, is not only funny but remarkably tender. In a movie that veers toward the crude, her subdued, quietly magnetic presence is, first and foremost, endearing.

A similar counterweight comes from the way Brice pulls back from absurdity just soon and often enough to not lose our patience. Granted, the moments in which he does so are also the more predictable and sentimental portions of the film. But predictability and sentimentality here stand in for recognizable humanity — they're traits that help us maintain an emotional connection to the characters, stops us from just gaping at them.

As The Overnight charts the extremes of its characters' personalities and their own search for honest expression, Brice seems both tempted and scared by what he puts on screen. When Alex wonders if he's going too far, it also suggests a question for Brice: How far down this path can I go before I've committed? Before the veneer of comedy peels off?

In the clutch, Brice plays it a bit too safe. By pushing the boundaries of acceptable and rational behavior, he also promotes a vision of marriage, sexuality and adulthood that's far from the traditional view espoused in many comedies. It's one thing to keep a sense of humor about the whole thing, as Brice successfully does throughout to avoid too pedantic a tone, but it's another thing to laugh off the whole endeavor in the last minute, as happens in the unnecessary final scene. In a sense, the film belatedly discovers its own limits when it comes to loosening up, though thankfully only after overshooting the comfort zone spectacularly, humorously and repeatedly for a good hour before that.

This review originally was published under the byline of Ella Taylor, who wrote our review this week of Infinitely Polar Bear. It should be credited to Tomas Hachard.

It also initially referred to Kurt's son as Wade; the son is actually Max.