Accessibility links
Why The Key Character In 'Inside Out' Is The One Who Isn't There Surprisingly, Pixar's latest goes without an element that almost every adventure movie for kids is sure to provide: a villain. 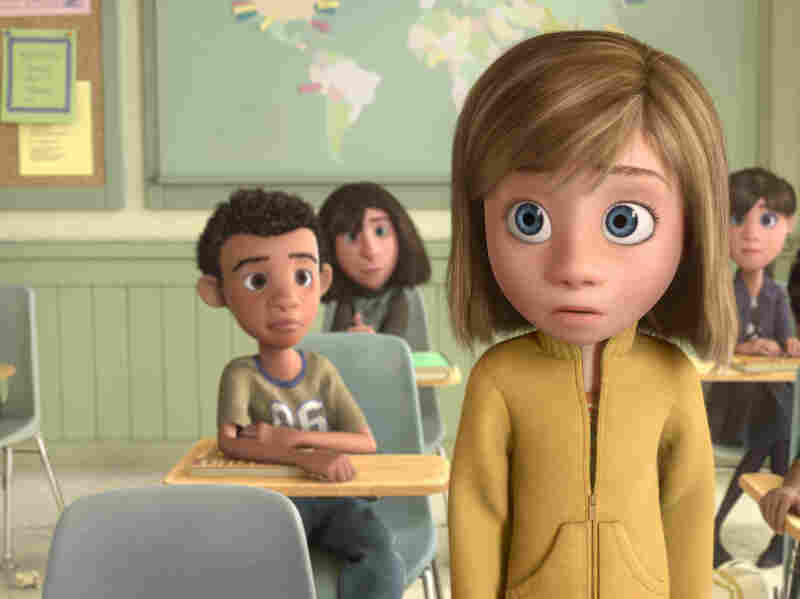 Riley is on her own in Inside Out. Pixar hide caption 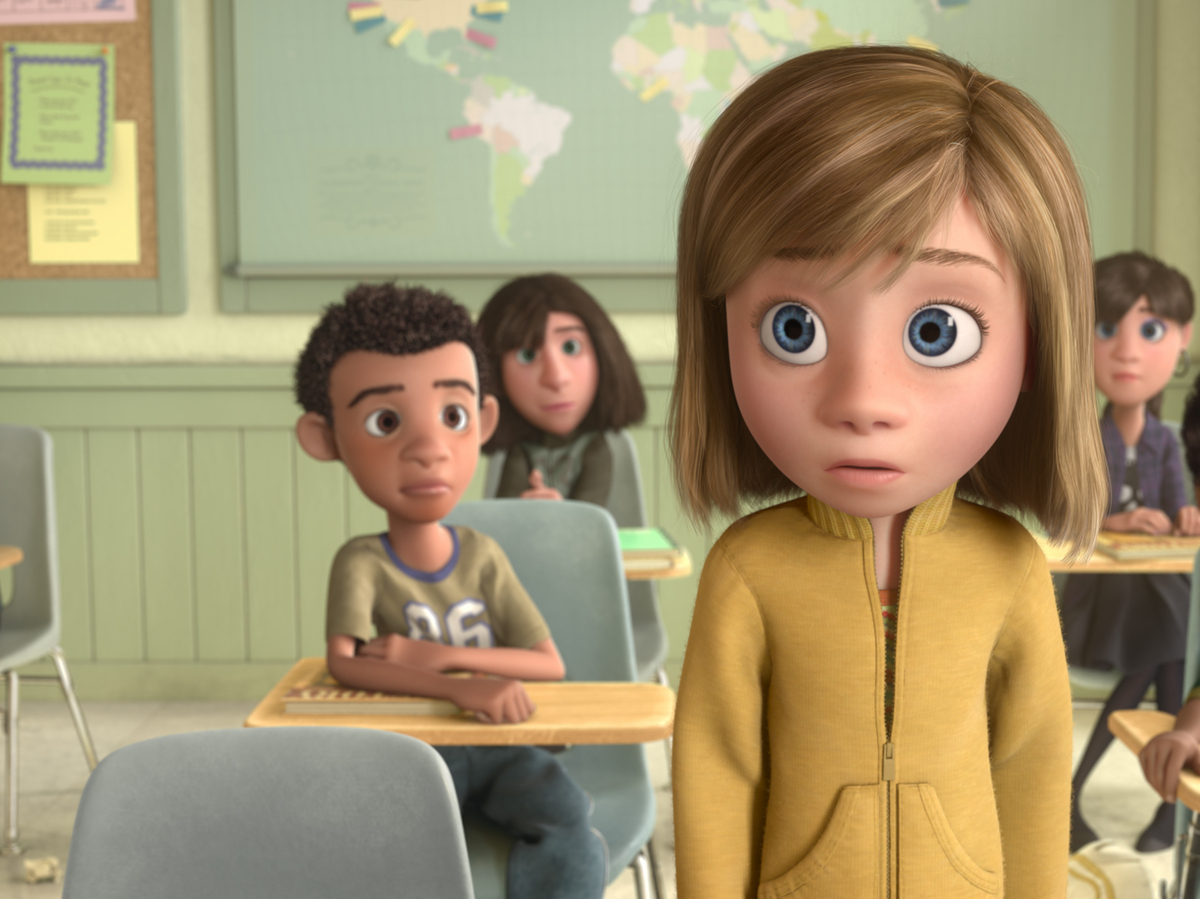 Riley is on her own in Inside Out.

Villains are staples of stories for kids. Making them bigger, meaner, madder, more impossible to defeat — that's how you build the ideas of fear and then, inevitably, of courage. A small person faces a giant, or a witch, or a wolf, or Jafar, or Cruella De Vil, or the Buy 'N' Large, and by watching that happen, you learn. You learn what it takes to beat the bad guy. You learn that you, too, can beat the bad guy. You learn not to lose heart and not to give up. You use something inside yourself to beat something outside yourself.

There is no villain in Pixar's new film Inside Out. That's not only because the action takes place inside the mind of 11-year-old Riley. It's also because even in there, where her Joy, Sadness, Anger, Fear and Disgust stand and argue and sometimes fumble at the controls, there is no villain. Riley isn't stalked by any invading monster; there's no hulking, lumbering beast named Insecurity or Hate or Depression who must later be defeated or vanquished in a climactic battle or persuaded to change its nature. Riley begins with a vibrant spirit humming with varied, vivid life, and her great battle — the battle that must be fought by her Joy and her Sadness but is being fought by Riley always, after all — is simply to master the fact that her assembled life is delicate and complex. Each segment affects the others; each decision and experience rattles the pieces and can imperil the whole.

Within this literally cerebral tale, there are clowns, vacuum hoses, glassy globes, a unicorn, a being that cries candy out of his eyes, and a literal Train Of Thought. But there's no intruder. Nothing in Riley's mind is ultimately tagged as not belonging or not wanted, because nothing in her mind can be separated from who she is. She is made up of the same things that cause her sadness, fright and disgust — those little emotions are her and she is them. There's nothing to defeat; if anything, what Riley is fighting against is the impulse to exile the feelings that embarrass her.

She's confronted with learning — through the interplay of emotions — how to balance all of the pieces of herself the way she will need to do as she becomes an adult and steps out of the part of her childhood where happiness could reliably be her dominant emotion and other feelings could be treated as temporary, meaningless flashes to be quickly soothed by the right sunny thought or driven off by the right distraction. This is the actual poignancy of adolescence: the arrival of more emotional nuance and more sophisticated understanding is the arrival of more sophisticated pain as well as more meaningful joy. Things blend, things bend, the world gets weirder.

Riley is, in one sense, fighting a battle we know she will lose: the battle for Joy to rule all things forever. But in another sense, her destination — the moment at which the story is aching to arrive — is balance, even if it's a kind of balanced chaos.

Admittedly, there's something very lonely about Inside Out if you compare its external structure and Riley's journey through her physical world to traditional kids' movies. There's no Donkey from Shrek or Abu from Aladdin or Timon and Pumbaa from The Lion King cheering her up with "Hakuna Matata." This respect for the role of melancholy in the lives of kids is very Pixar, but it's particularly acute here: There are no other Incredibles, there is no EVE, there is no Dug the dog. Riley's allies and boosters in this adventure are not made or met along the way; they are summoned. They are hers -- in fact, they are her. Her mom and dad love her, and she needs them, and they can help and they must help. But if you've ever known a kid this age, you know that sometimes, trying to help is like trying to grab onto a wet eel. They have to do some of the work themselves, and it's often the beginning of work they'll do imperfectly but tirelessly all their lives.

And honestly, some of what Riley is experiencing is lonely. Isolation is, for so many kids, a fundamental part of the rhythm of those years. At that age — at any age — there are times when it's just you and your little cartoon feelings, figuring stuff out. It's one of the reasons kids keep diaries: They turn into tumbling dialogues, whether you'd identify them as such or not, between your Anger and your Fear or your Joy and your Sadness.

But there's also a sense at the core of the movie that the fights you fight on the inside are integral to the relationships with other people you're going to have on the outside. Riley is feeling a kind of frightening centripetal force that makes her afraid she'll fly apart, so she turns and pushes inward. Inward, to where she has to go on her own journey in her own company, the better to turn back again toward her parents and her friends.

The structural decision to do without a villain, and ultimately to do without one of the easiest elements to make entertaining and marketable, means that the process Riley is undergoing — adolescence — is visualized as ... normal. Her mind is not a space that's been invaded by something that must be driven out, but a new environment to be mastered. And if other kids' stories are there to teach kids how to be brave when they see witches and giants, Inside Out is there, maybe, to teach them how to be brave when there's no witch and no giant, but things can feel broken anyway.