Accessibility links
A Sea Change At Chambers Bay, Where U.S. Open Meets U.K. Aesthetics Robert Trent Jones, Jr., turned a former quarry — "kind of an ugly place," he says — into the Chambers Bay golf course. Now he hopes it represents the sport's future — and a challenge to golfers. 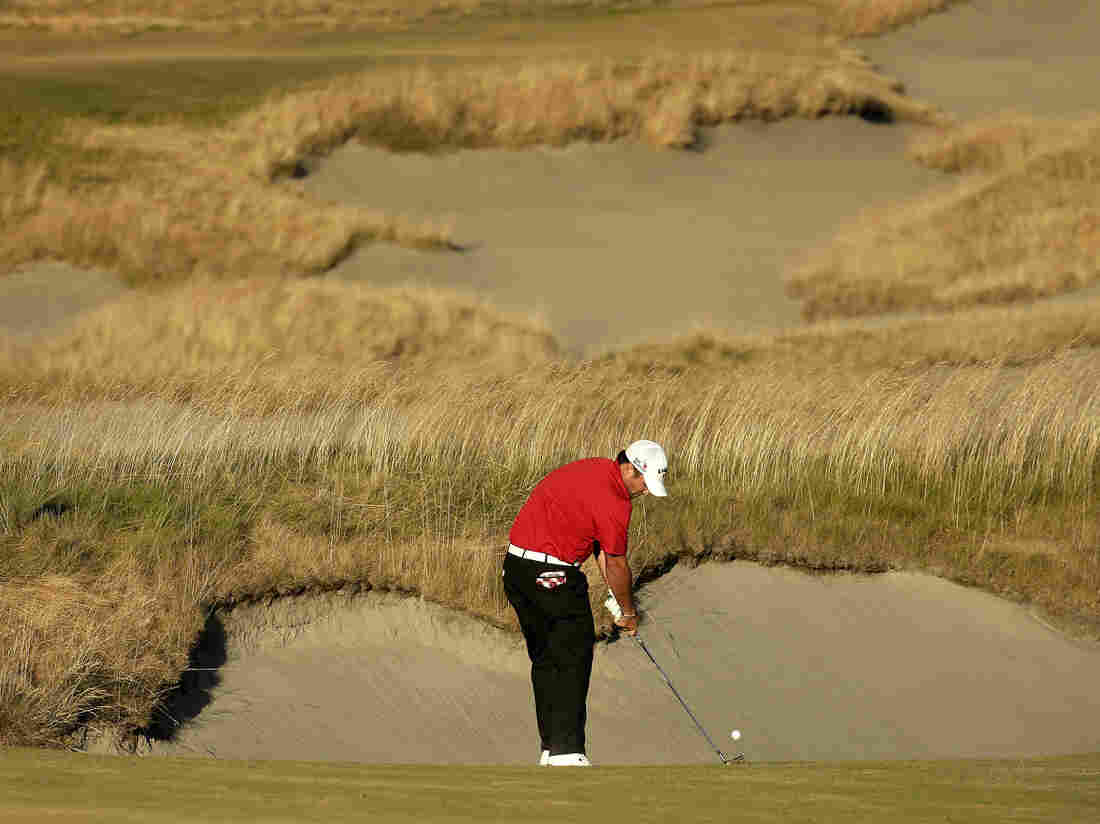 Patrick Reed hits from the fairway on the 18th hole during the U.S. Open golf tournament at Chambers Bay. Some have criticized the grass's appearance, but others see it as "the future of the game." Charlie Riedel/AP hide caption 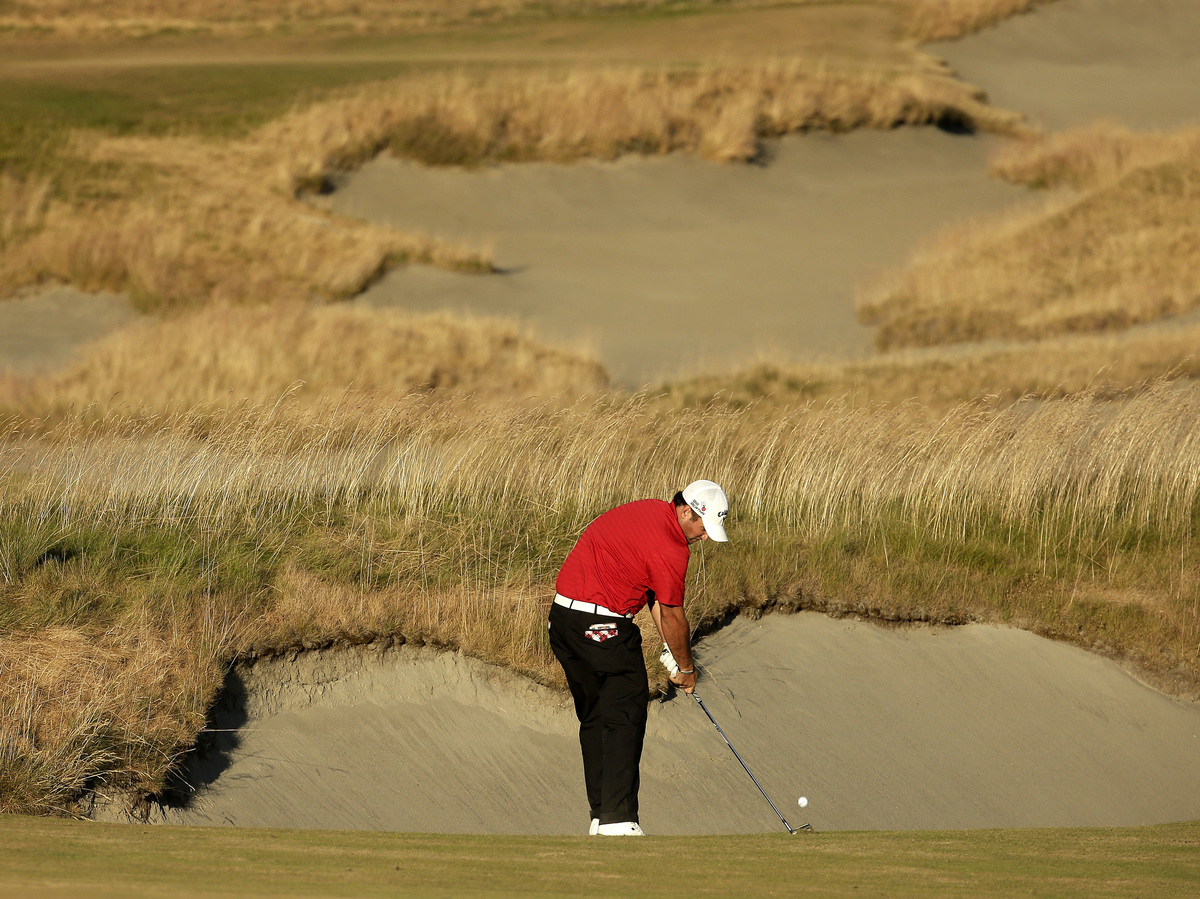 Patrick Reed hits from the fairway on the 18th hole during the U.S. Open golf tournament at Chambers Bay. Some have criticized the grass's appearance, but others see it as "the future of the game."

So did the golf course where they were playing.

It's rare for the venue at a major tournament to grab as much attention as the star players. But Chambers Bay in University Place, Wash., near Tacoma, is a rare place to play golf. It's improbable, controversial — and, according to its supporters, it represents the future of the game. 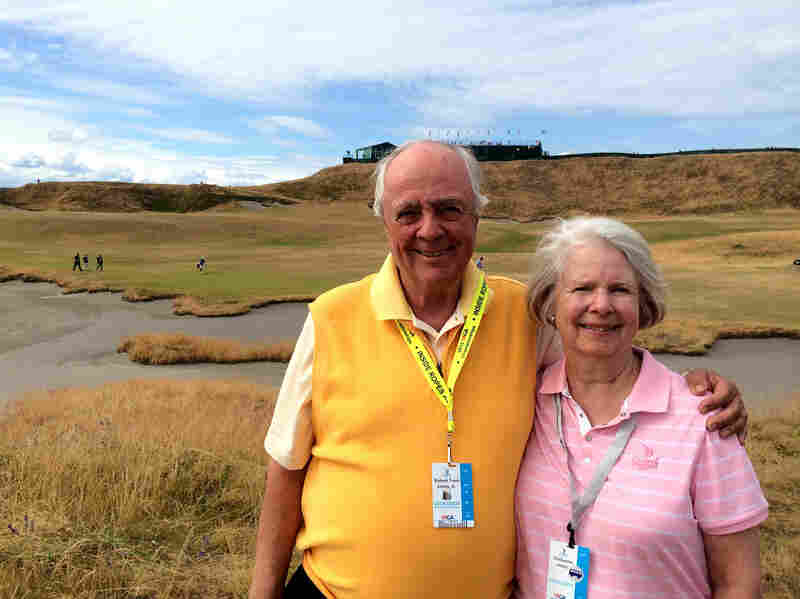 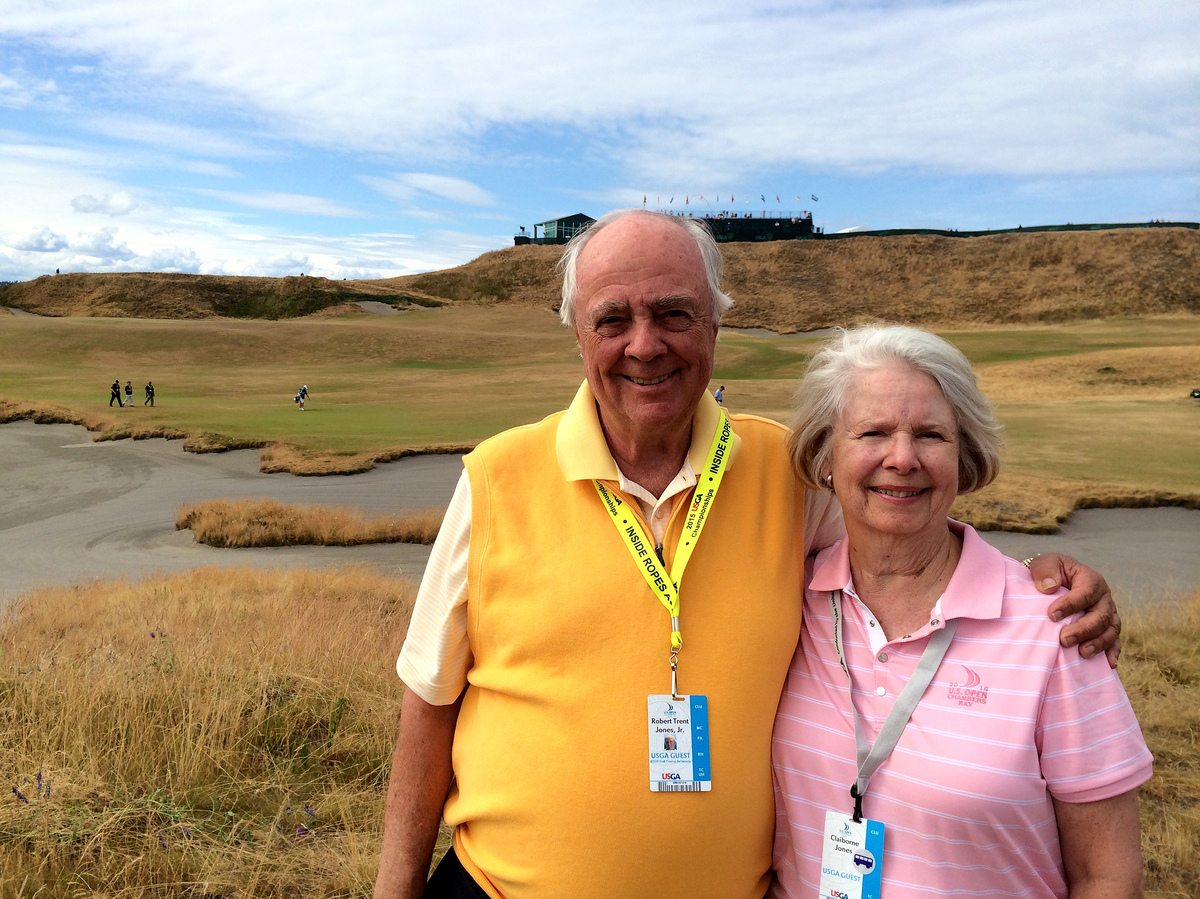 "It's a dream fulfilled," he says, standing alongside the course's 18th fairway. "I have spent my entire life in golf. And I cannot tell you how proud I am that our national championship has come to a course of our design."

You can understand that pride when you consider the dramatic transformation at Chambers Bay, which opened in 2007.

Before Jones began his major makeover in 2004, the site was a former quarry. Stone was mined to build the highways of Washington State and skyscrapers in Seattle, among other things. The process left behind a big, sandy pit.

"It really was kind of an ugly place," Jones says. "The area had been mined for over a hundred years and it was basically clawed out, creating this large bowl."

The vision for turning a big sandbox into a golf course came first from Pierce County Executive John Ladenburg. But Ladenburg encountered resistance to his plan to convert the 900-acre site, using public funds, into a recreation area including a golf course. "Ladenburg's folly," critics cried.

But he pressed ahead and put the design up for bid, according to Golf Digest, with the twin goals of creating a links-style course like those popularized in the British Isles — and someday hosting a U.S. Open at Chambers Bay.

Jones' firm won the bid. It's the designer/architect's job to look at a big place like that and, if not see beauty, at least see potential. And when asked if he knew he could do something with the big pit, Jones smiles and blurts out an enthusiastic "Yes!"

A Bit Of Britain In The Pacific Northwest

For Jones, you may as well have draped the site in an enormous Union Jack. So much about the place made him believe it could be fashioned into a links-like course, following the style developed in the U.K. — which meant being near the sea, at sea level and open to the elements.

Puget Sound was Chambers' sea and the afternoon winds and Northwest rain fit the "elements" bill.

"Sand is everything. We architects would kill for sand," Jones says. "If you get a sandy site, you can craft it with the bulldozers and shape the shapes you want."

Here's Why The Grass Isn't Greener At This Year's U.S. Open

And boy, did he shape. Jones calls Chambers Bay a "three-dimensional links course" with a vertical component not seen in the classic flat, moonscape-y courses in Britain. There's a 200-foot difference from Puget Sound up to the top of Chambers Bay.

"You travel that distance three times walking the full 18 holes," Jones says. "This is a hard walk: 7 1/2 miles minimum, probably more like 10 — and changing elevations. You'll sleep well after you play here!"

Adding to the difficulty of both walking and playing is the unique grass carpeting Chambers Bay. The massive amounts of sand were an invitation to grow fescue grasses, an indigenous grass of the British Isles that grows well in sandy soil.

The thin, rounded blades grow in a closely cropped way.

"It's tight," Jones says. "When you walk on it, it's firm underfoot. Actually, a hard walk, physically, on your feet."

Hard on golf balls, too.

And they roll forever. This is one of the unique challenges for golfers used to the traditional parkland courses with lush, giving grass — where a player can calculate a distance, hit the ball to that distance and have it stop on a dime.

There are no dimes in links golf — only slick surfaces and undulating mounds. Chambers Bay adds the extra challenge of elevation changes — and in the afternoon, the winds that start blowing in from the Sound.

The golfers who succeed in this environment are the most creative, the best thinkers and the ones who can best control their shots.

It's a true test of golfers vs. golf course. But in the abstract, says Jones, "It's the golfers vs. me!"

The Goalkeeper of Chambers Bay

A golfer stepped into the enormous, sandy bunker on the 18th hole and rifled a shot toward the green. Jones liked what he saw — and heard.

"You can tell by the click" of the shot," he says. "When it's hit properly like that, it sounds authoritative, and it is."

Like any spectator, Jones appreciates a good shot. But the 75-year-old also sees himself as a competitor, facing off with the tournament's 156 players. And Chambers Bay is his prized weapon.

"Think of me as the goalkeeper standing in the net, and I'm seeing the players come at me," he says.

His defenses are the sand, the slick fescue, the undulations and bumps and hills. Some of the trickiest spots have names – like the Mummy Mound, Hell's Bunker and Chambers Basement, a particularly penal 12-foot-deep bunker in the middle of the 18th fairway.

Despite his defenses and competitiveness, Jones wants the course, ultimately, to yield.

We've seen that creativity in the tournament so far: putting 20 feet in the opposite direction of the hole, hitting approach shots away from the flag, playing a ball beyond a hole and using the sharp undulations to have the ball circle back to the target.

When it works, you hear the roar at Chambers Bay.

When it doesn't, a moan — or silence. And there's a knowing shake of the head from Jones.

"When a player doesn't make a great shot, it's not that I'm rooting for them [to mess up]," he says. "But when [a player] doesn't succeed, then he deserves the punishment he's had given to him by the defense."

The punishment naturally has elicited grumbles. What would a U.S. Open be without some players — especially those plummeting down the leaderboard — challenging the traditionally tough courses?

But at Chambers Bay, there appears to be a consensus that the course's punishment is not always deserved — and the greens are not what they should be.

To those watching on TV, it's a bit of a shock to see not only the brownish greens of Chambers Bay, but splotchy patterns. It's not a shock to the U.S. Golf Association, which runs the tournament. In fact, USGA executive director Mike Davis talked about it the day before the Open began.

"A majority of the greens here, we do have some poa annua," Davis said.

Poa annua is a turf grass that has mingled with the fescue on the greens, causing the splotchiness — and a different consistency, which means bounciness with a putted ball.

Darin Bevard, Director of Championship Agronomy for the USGA, explained it this way to Golf magazine: "The poa and the fescue grow at different rates during the day ... With the extra moisture in the morning, the poa stands up more, so conditions are bumpier. In the afternoon, the growth habit [of the poa and the fescue] becomes more similar. However, the sun and the breeze throughout the day makes the greens firmer and in some cases faster, so there's definitely variation from morning to afternoon."

The USGA's Davis, whom Jones describes as the "conductor" of the U.S. Open (Jones calls himself the "composer"), says, "Ultimately, what we're after is how [the greens] play. We want them as smooth as possible."

Through the tournament's first two days, a number of players grumbled that the USGA had a long way to go.

Sergio Garcia, who played well enough to make the cut and qualify for the weekend's final two rounds, fired the first salvo on Twitter: The "greens are as bad as the[y] look on TV."

More criticism followed. Veteran Colin Montgomerie, who also made the cut, said, "The greens are extremely poor. A course of this demanding nature had to be in perfect condition and unfortunately, it is not."

Not surprisingly, the players at the top of the leaderboard did not join the negative chorus. Indeed, those who putted firmly and with confidence seemed to have more success than tentative putters. And it makes sense: Speed and firmness cut through the uneven surface better and on a truer line. If a golfer doesn't hit his ball with authority, the bumps will take over and direct it who knows where.

Of course, a firm putt might also skitter off the green and into a yawning bunker.

With sunny, warm and breezy weather hanging over Chambers Bay, the situation may resolve itself through Saturday and Sunday. Tournament officials are hoping the poa sits down — and the critics stand down.

Gold Is Beautiful — and Sustainable

After all is said and done — and criticized — Jones hopes Chambers Bay has a lasting effect on the game of golf, and not just at the championship level. He's hoping golfers everywhere come to embrace the aesthetics of the links.

"We hope that all golf courses take a look at this beautiful U.S. Open and look at the transformation from the color of spring — green — to the golden color of summer at this solstice moment," he says. "And they will see gold is a beautiful color."

And, he adds, it's a necessary color if golf is to survive and thrive in a drier world.

"We think the less turf, less water consumption, less fertilizer, fewer pesticides and herbicides means sustainable use of the terrain and therefore less money to maintain," he says.

Jones says Chambers Bay will require one-third of the budget required to maintain green-carpeted Augusta National, home of the Masters, for a year.

Granted, fescue, while a much less needy grass, is not for every climate. But Jones hopes the general message that gold golf courses are beautiful starts to sink in. "It's the future of the game," he says.

For now, there's a major golf tournament to finish.

And by the time there's a winner, organizers at Chambers Bay hope this unique and controversial golf course will be declared a victor as well, in its debut on the sport's biggest stage.