Accessibility links
Review: Neil Young + Promise Of The Real, 'The Monsanto Years' These taut, righteously furious, stone-simple songs fit together under a catchall concept about companies wielding extraordinary influence over our quality of life.

Review: Neil Young + Promise Of The Real, 'The Monsanto Years'

Review: Neil Young + Promise Of The Real, 'The Monsanto Years' 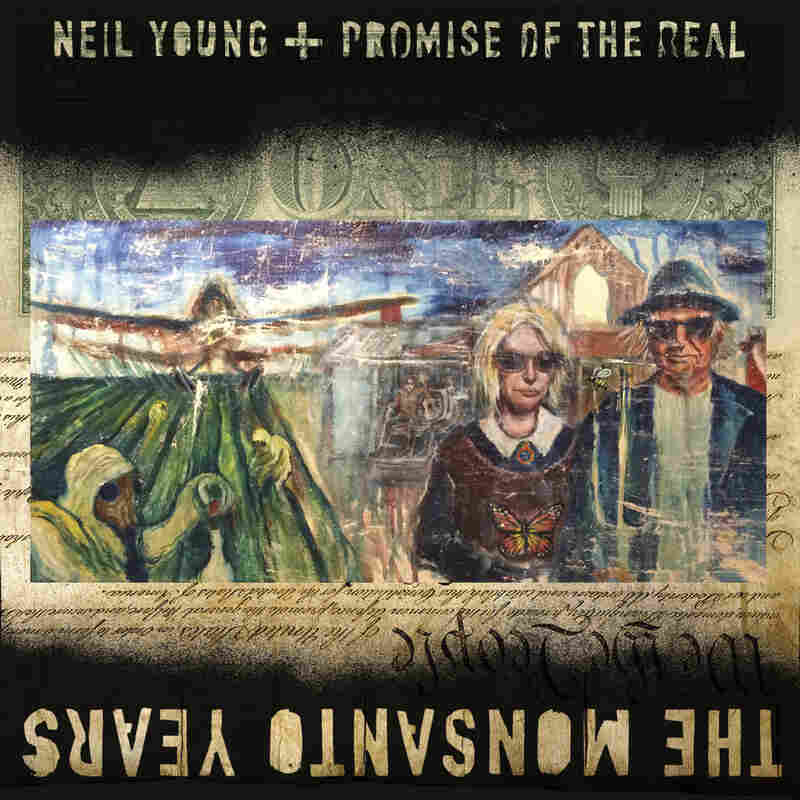 A few songs into the latest set of ready-to-wear rants from Neil Young, there's a moment when the rock star shares a bit of the advice he gets as he goes about his daily life — from fans, possibly, or a manager, or maybe the barista in his coffee shop.

The song's called "People Want To Hear About Love," and in its verses, Young rattles off things people don't necessarily like to confront when they kick back and listen to music. The list of must-avoid topics includes the "Chevron millions going to the pipeline politicians," and "all the beautiful fish in the deep blue sea dying." But that's not all: These well-meaning souls also advise, "Don't say that Citizens United has killed democracy," and suggest that Young not mention how "Corporations are hijacking all your rights."

Having written some of the rock era's most tender odes to love and devotion, Young, now 69, might well be a little conflicted. He understands how love can be an escape; he appreciates the notion of the love song as a salve for the soul. But he's a chronicler of his times, and there's so much going on in the world, from the erosion of basic freedoms to the erosion of the soil, and he feels a responsibility to sound the alarm. The title line is repeated often, in unwaveringly consonant '60s-Coke-commercial vocal harmonies — a contrast to the acidic voice Young uses to inventory the many unpleasant realities that have riled him up.

As lyric devices go, it's a sly one: Young gets to lament agribusiness and greed while speaking to a universal need for love — and also, perhaps most crucially, lamenting that the population is willfully ignoring reality and/or numbing itself to what's going on. (He echoes this lament in "Big Box" when he says, "The whole town's asleep.")

"People Want To Hear About Love" is the most artful moment on The Monsanto Years, Young's 36th studio album as a solo artist. Here, we have a series of taut and stone-simple Neil Young songs that fit together under a catchall concept (about companies wielding extraordinary influence over many aspects of our quality of life), each powered by its own supply of righteous fury. Enjoyment of it probably depends less on whether you agree with Young's positions than on how much tolerance you have for a mantra, repeated frequently, using the three syllables that make up the trade name Monsanto. It also helps to like your harangues set to three-chord rock and expressed through triadic melodies. This is not subtle, Harvest Moon Neil, brooding at the piano. This is ornery, snarly Neil. Give him a megaphone and a transcript of these lyrics, put him on a street corner and watch what happens.

At times in the lyrics, there's a sense that Young simply cranked up the Current Events Couplet Generator and let rip about everything that's bothering him. One minute, "Big Box" tackles the corporate bailouts — "Too big to fail / Too rich for jail" — and in the next he's swerved into the campaign-finance quagmire: "They cast their votes and no one gets excited," he shouts, sounding two steps away from meltdown, "because they are Citizens United." Other songs focus more successfully on a single theme: The verses of "A Rock Star Bucks A Coffee Shop" explain Young's dismay over the Vermont GMO-labeling controversy in which Starbucks and Monsanto became allies. And the somber title track breaks down, in simple language, Young's position on Monsanto's unique control over the agriculture industry. "The farmer knows he's got to grow what he can sell ... Every year he buys the patented seeds / Poison-ready, they're what the corporation needs."

Young can be counted on to go big when venting indignation — remember the massive choir he deployed on 2006's Living With War, to help him unfurl a sweeping lament about Iraq? Here, he gets help from Promise Of The Real, a proudly ragged rock band fronted by Micah and Lukas Nelson, sons of Willie Nelson. Though not as loose as Crazy Horse was in its prime, the band understands exactly the guitar punctuation each vocal phrase needs — sometimes that means sinewy overlapping lead lines, and sometimes it means buzzsaw chords pushed to the edge of distortion. At times, Young's tortured diatribes can take up all the air in a mix; the album's strongest moments, including the Stones-esque "Workin' Man," achieve a balance between howling vocal outrage and badass rhythmic stomp. The scruff in the music brings to life his troubling big idea about the rape of the land and its corresponding impact on the soul.

Whatever you think of Young's politics or methods, give him this much: After all this time, after decades spent ranting about nuclear power and corporate malfeasance and the plight of the family farmer, he still sounds like a true believer — and an idealist. He's reached the age where people often become resigned, but chooses, perhaps quixotically, to play the worried town crier. Of course, there's no shortage of material for sequels.